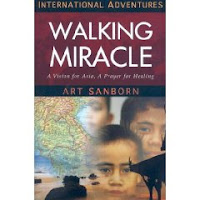 I hated to finish this book. Chapter by chapter it was a blessing, so much so that I have added it to my favorite book section on this blog. My faith grew and strengthened as Art Sanborn shared his powerful story of international ministry and a physical healing that would be impossible except by God.

Someone should make a movie of this book, which is framed by two life-altering experiences. In the first chapter Sanborn recounts the frightening afternoon of body surfing that left him a terminal quadriplegic. In the final chapter he writes of the joy nine months later of walking into the office of the doctor who treated him. In between he shares the many miracles he encountered over the years through his work as a missionary in Southeast Asia.

I love reading stories about people with strong faith, but I have never read about anyone for whom miracles were provided on such a regular basis. It was because of these miracles that Sanborn was saved from despair when he was told after his accident that the best he could hope for would be to breathe without a respirator. Having broken the third and fourth cervical vertebrae in his spine, doctors said his injury was as severe as Christopher Reeve’s and that there was no hope of his ever regaining use of his arms or legs.

“I felt my spirit fighting to stay alive,” he writes. “I had seen others die before, and I knew that, when a life hangs by a thread, the patient’s level of determination is often what makes the difference.

“But why fight it? If I survived this ordeal, I would only live to be a full-time burden on my family. And living with a 24-hour-a-day migraine and no ability to move wouldn’t really be living anyway.

“Struggling against these thoughts, I turned my focus toward worshipping Jesus. As I did so, He filled me with the will to persevere. I reflected on Scriptures that I had memorized, and those Scriptures gave light to my present situation. The thought had been nagging me, What can I possibly do in this situation to be productive?

It occurred to me that I could use this time to pray and intercede for others. So I spent much of my waking hours doing just that. I knew I was robbing Satan of any little victory he might have gained from the destruction of my spinal cord.”

And he prayed for himself, for healing, “since the miraculous power of Jesus has no limits.”

Rather than chronicle his medical journey, he flashes back to the extraordinary life he, his wife, Ellen, and their three children, Sean, Michelle and David, lived as missionaries. The stories of miracles are so uplifting -- the mysterious truck and driver appearing on a narrow mountain path to carry them to their destination before vanishing into thin air, the financial needs that are met to the penny, a lost pocketbook returned by someone who didn’t seem to exist -- these are just some of the remarkable incidents in the lives of the Sanborns.

The stories are told to praise God, but Sanborn’s great sense of humor keeps them from sounding preachy. Even his experiences that don’t involve miracles make for compelling reading, amounting to fascinating lessons in cultural differences, in food -- I could not have eaten what he did! -- and languages -- he once told a group of university students that Jesus was crucified on a pair of trousers, and another time trying to lead a prayer to the Almighty God of the Universe he had prayed to “the fat woman on the bicycle.”

In closing, Sanborn writes about the reaction he gets from people to his miraculous healing. Although he could walk, he had no feeling in his legs. When people asked how he could walk under those circumstances, he’d reply: “Because I’m a Christian. I don’t walk by feelings. I walk by faith.”

Once a rehabilitation nurse, after meeting him at church and seeing him as a fully functioning man, accused him of lying, saying that he never could have been a quadriplegic.

“That left me a little rattled at first,” he writes, “but upon reflection, that encounter actually became a source of affirmation. Anyone who has a personal relationship with Jesus knows that He can do all things. He could have completely healing me moments after my accident, but if He had, who would have believed that I had really broken my neck? Now I have MRI films that were taken both before and after my operation, in addition to all the other hospital records that verify my injury.”

He quotes Isaiah 40:31 in explaining his foundation, his ability to continue through adversity, . . . “God has proven to me, time and again, that ‘those who wait on the Lord shall renew their strength; they shall mount up with wings like eagles, they shall run and not be weary, they shall walk and not faint.’”

A Walking Miracle is a beautifully written account of a life beautifully lived.
Posted by Retta Blaney at 11:12 AM

I performed in Judah Ben Hur, which the Sanborns produced in Singapore. I was told that Art was paralyzed to the same degree as Christopher Reeve but that I wouldn't notice. I was blown away to meet him and discover that they were right!

I experienced another miraculous story in my friend Mac Nelson, who's story is written up in Waiting for My Fingers. Mac, who has performed with Liz Taylor, Jerry Lewis and the like, was losing use of his arms through a disease called stenosis. His doctors were shocked to find his recovery well beyond what they expected.