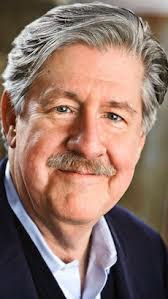 “What’s the point of the arts as a discipline? It’s absurd to pretend to be somebody else, a rabbit or Hamlet. It’s silly, but it isn’t. We don’t begin with reason, we begin with feeling and insight. All of life is 99 percent nonrational. Reason is nothing compared to God’s love. That’s what makes us who we are. Reason is the first thing that should be dropped when you start exploring the spirit. You can bring reason to bear on what you find, but truth simply doesn’t happen that way.”
Posted by Retta Blaney at 12:38 PM

Thanks for sharing. I had no idea he was that kind of gentleman. Good to hear. Loved his work for many years-- from Roosevelt all the way to Gilmore Girls. He will be missed.