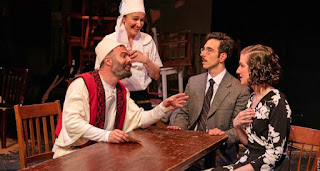 Members of New York theatre company Blessed Unrest were meeting in the city with their international collaborators, the Kosova theate group Teatri ODA, searching for an idea for a third original play to do together.  They had no way of knowing that what they decided upon in those brainstorming sessions in 2015 would be about as timely as it could be when it opened Off-Broadway in the spring of 2019.  But then, they hadn't foreseen the presidency of Donald J. Trump and his attempts to shutdown the southern border of the United States.  Refuge, their story of the life-saving hospitality of Albanians in World War II, became even more relevant to them.

"It's important now to tell of this historic humanitarian effort on behalf of strangers as the president of the United States portrays immigrants as dangerous," Matt Opatrny, Blessed Unrest's co-founder and managing director, said.  “Our President lies.  It’s important to show refugees as people under desperate circumstances.  What frightens me is the way refugees are being portrayed. You don’t leave Honduras and walk to Mexico unless you’re desperate.  We have to see these people as human beings who need help.”

Four members of the production even know first hand how this feels.  They were refugees in the late 1990s in the no-man’s land between Kosova and Macedonia when they were among the one million fleeing the ethnic cleansing of Albanians in Kosova.  Their experiences are part of the compilation of stories that make up the play, which parallels a story of Jews fleeing Poland in the late 1930s and finding refuge in Albania, the only country in Europe to have more Jews after the war than before.

Opatrny, 44, discussed Refuge, which had its world premiere in April at Baruch Performing Arts Center, during a telephone interview from his apartment in Manhattan’s Hells Kitchen neighborhood.  He calls himself “the lead playwright” and explained that Blessed Unrest’s productions don’t start in the traditional way with a written script.  Through a “devised process,”   the show is developed with the actors and co-directors.  The script was still changing within weeks of the April 27 opening.

“I was writing text in response to what was happening in the room,” he said.  “The way we work is physically first.  We keep the script out as long as possible.  We’re building a physical vocabulary before the script.  I’m following the process rather than leading it.”

The result is a powerful show that combines story with dance, music and song.  Refuge is modern in staging and yet conveys an ancient feeling of human struggle and triumph.  At the beginning, two young women in modern day New York City come together in a hearty embrace.   “I exist because of your family,” says Maya (Becca Schneider) with gratitude and wonder.  She has only recently learned what the Albanian family of Teuta (Ilire Vinca) did for her grandmother and great grandparents in the late 1930s.

Enacted on a bare stage with few props (set design by Sonya Plenefisch, with lighting by Jay Ryan), the story takes prominence as it journeys back to Poland as the Nazis approach and Miriam (Schneider) and her husband, Yakov (Perri Yaniv) make the decision to escape with their daughter, Adah (Nancy McArthur).  They are rejected by every country they petition for refuge.  Except for one — Albania, whose government was issuing papers to anyone who wanted them.

“You are safe here,” the family is told as they arrive at the small house of Bujar (Eshref Durmishi) his wife, Zoja (Vinca) and their daughter, Tana (Daniela Markaj.  “Now we are cousins.  You are Albanian.”

The characters are composites, based on years of research and first-hand accounts of many, many people who had helped the Jews.  Opatrny said at least 2,000 Jews have been accounted for as being saved, but that anecdotally the number is much larger.  Even though they didn’t share the same language, religion or culture, the Albanians, most of whom were Muslim, brought the Jewish refugees into their homes and gave them Albanian identities.  The refugees lived openly, holding jobs such as tailors and sign painters, even after the Nazi occupation.

Not a single Jew was taken to a concentration camp from Albania or killed by Nazis in that country, Opatrny says.

“They were right in front of them, not hiding in basements. They were fully accepted as members of the Albanian community.”

Teatri ODA’s co-founder and a co-director of Refuge, Florent Mehmeti, knew of the Albanians’ heroism and outstanding generosity during the war and was the one to propose it as a basis for a joint production.

“Of course, we had never heard of it,” Opatrny said.  “Almost no one we knew had heard of it.”

Mehmeti also knew the story of how, in the late 1990s, it would be the Albanians who would become refugees because he, along with Vinca, Durmishi and Markaj, was among them.  This crisis is also portrayed by the fictional Albanian characters and their descendants.

The dialogue is bilingual.  Opatrny wrote it in English and Mehmeti translated it into Albanian.  The production is enhanced by musicians from Metropolitan Klezmer who play traditional Albanian music and Yiddish songs onstage at various times throughout.

This unusual partnership seemed appropriate, Opatrny said, because Blessed Unrest has been international in its scope since its founding two decades ago.  In 2005, he and his wife, Jessica Burr, the group’s founding artistic director and a Refuge co-director, went to Albania to look for an international collaborator.  They chose that country because Burr had visited in 1993 as a college student and been overwhelmed by the hospitality of the people, who were extremely poor.

“The generosity of the people blew her away,” he said.  “She wanted to bring something back to them.  The way she chose to do that was through theatre.”

Opatrny and Burr discovered Teatri ODA and knew they had found their match.

“We artistically fell in love with them,” he said.  “This is something amazing to us.  It’s about reflecting another culture that is often ignored.”

And, as Opatrny has found, it is a rich culture, and a giving one in spite of all the hardships the people have suffered in being overrun by many occupiers throughout the years and having their religion changed from pagan to Catholic to Muslim as the different powers swept through.

“It’s an ancient culture.  They’re fiercely proud of who they are.  Circumstances changed but their code of honor, their besa, never did.  Cultural laws supersede government laws.”

This is portrayed effectively in the play when the Jewish family arrives at the home of the poor Albanians and is given the master bedroom and told that the house is now theirs and no longer the Albanians.

“It was not unusual that they did this.  It’s a tribal cultural with cultural rules.  It’s hard for Americans to understand.  If a guest arrives at your house, it belongs to them.  If New York were flooded with refugees I can’t imagine seeing it as their apartment and not mine.

“Their strength is having lived through adversity for thousands of years.”

The two theatre companies hope to share their story of the Albanians’ magnanimous deeds by raising money to tour Refuge in the Balkans next year.  In the future they’d like to tour Europe and Israel and then return to New York.

While some of the Albanians who harbored Jews are honored as The Righteous Among the Nations at Yad Vashen: The World Holocaust Remembrance Center in Jerusalem, the scope of their heroism remains little known.

Opatrny sees that as indicative of the Albanian people for whom hospitality is second nature.  He let’s Teuta explain it when Maya asks her why the Albanians aren’t recognized in every history book for what they did.

“ . . . for us Albanians this is not something unusual. People needed help and we helped.  If your guest is thirsty and you offer them water, you don’t write about it in history books.”
Posted by Retta Blaney at 10:23 AM No comments: