Blues for an Alabama Sky 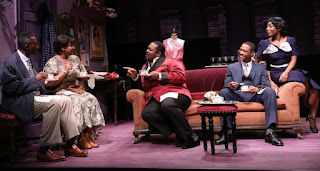 Spending Saturday afternoon on Theatre Row at Blues for an Alabama Sky was a thoroughly pleasant way to pass a couple of hours.  This 1999 play by Pearl Cleage doesn’t break any new ground or hold any real surprises, but under LA William’s direction I was transported into the Harlem Renaissance of 1930 and the world of five likable and human characters.

Produced by the Keen Company, this play is being staged in New York for the first time, which seems strange because it’s so evocative of the city at that time and in that neighborhood.  It’s the story of Angel (Alfie Fuller, right)), a past her prime nightclub singer in Harlem joints who, as the play opens, has just been dumped by her Italian mob boss sugar daddy and fired from her job.  She’s taken in by her second cousin Guy (John-Andrew Morrison, center) who, like Angel, has migrated from Savannah to Harlem to pursue a dream.  An openly gay costume designer for marginal neighborhood performers, Guy longs to move to Paris to create for Josephine Baker, whose presence is felt in a large poster in Guy’s apartment and in his always hopeful attempts to get her attention by sending her his designs. Baker is a strong motivator for his dreams but Angel is more pragmatic.

“I don’t see her share of the rent,” she says dryly.

Angel doesn’t have Guy’s natural optimism but she pushes on, going on auditions and keeping a fighting spirit.  Unfortunately, more often than not, she proves to be her own worst enemy.  Regionally she been portrayed by Phylicia Rashad, Robin Givens and Jasmine Guy.  It’s a good, well-developed part for an actor and Fuller fully brings her to life.

But her realism can’t dampen Guy’s spirits, even after he’s attacked and beaten for being gay.

Their next door neighbor and friend, Delia (Jasminn Johnson, second from left), works in a Margaret Sanger family planing clinic.  Sam (Sheldon Woodley, left) is a doctor who will end up playing a key role in both women’s lives.  Leland (Khiry Walker, second from right) is a recent widower from Alabama whose wife died in childbirth along with their son.  All of their lives become closely entwined.  I felt I was inhabiting their world for two and a half hours with this excellent cast.  Thanks also to Lindsay Jones for the mood-creating original music.

In a program note, Williams says he discovered the play about a decade ago and was drawn to it by the humanity of its characters and their faith and persistence.  I felt the same way.

Williams faced a series of rejections in his quest for a New York premiere but he persisted.

“I refused to believe that a story about real people living on the precipice of a renaissance and a depression, while also grappling with homophobia, religion and women having agency one their own bodies, didn’t belong on the New York stage,” he wrote.

A big shoutout needs to go to costume designer Asa Benally. The play may be set at the start of the Depression but these characters have great wardrobes.  Scenic designer You-Shin Chen created a simple but effective set for the side-by-side apartments, with that large poster of Baker representing the striving of these characters.

But striving becomes hard for Angel.


In Blues, some do and some don’t.  Head to Theatre Row to find out the fates of these engaging characters. Performances continue through March 14.
Posted by Retta Blaney at 3:23 PM No comments: