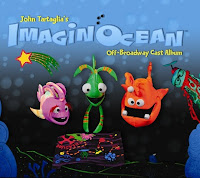 I’ve been enjoying the newly recorded cast album of John Tartaglia's ImaginOcean. I saw this charming show in May after it was nominated for a Unique Theatrical Experience Drama Desk Award. Now I’m reliving it, as well as lifting my spirits with the cheery tunes.

ImaginOcean is a children’s show that you don’t have to be a child to enjoy. The same goes for the CD. William Wade’s songs (music and lyrics) are the stuff of any good musical. “Which Way to Turn” is about facing a dilemma and believing you can win -- “Keep your eye on the ball and you’ll make the right call.” “Just a Stone’s Throw Away” is a reminder that challenges have their purpose -- “Steady as I go, this is just a chance to grow.” And “The Treasure” points to what is really important in life -- “Whether you’re young or old, whether you're shy or bold, you’ll find your friends are your greatest treasure of all.” Finally, what’s a good musical without a go-to song that you come out singing? That’s “On Our Way,” the song that launches the three little fish friends on their journey. I’ve been singing it as motivation to get through some challenges of my own.

The CD features Tony and Emmy Award nominee Tartaglia, who created and wrote the undersea family musical adventure that opened March 31 at New World Stages.  Tartaglia, a “Sesame Street” alumnus who portrayed Rod./Princeton in the original cast of Avenue Q, is the voice of ImaginOcean's fish friends Dorsel and Tank, as well as Leonard, the lovable octopus.

The lively music is performed by a 14-piece orchestra and an ensemble of singers.  In addition to Tartaglia, vocal performances include ImaginOcean director Donna Drake, as the voice of Bubbles, the female fish of the trio, and ImaginOcean producer and veteran Broadway musical performer Michael Shawn Lewis, who lends his voice as Ripple, the tiny but mighty sea horse. The CD contains all the songs in the original production plus two bonus tracks, a dance remix of "Jellyfish Jive" -- which certainly gets me dancing -- and "The Treasure," performed by a children’s chorus.

To celebrate the CD’s launch, Tartaglia and the cast of ImaginOcean will perform at my neighborhood Barnes & Noble on 86th and Lex on Wednesday at 7 p.m.  If you want to go, get there early. The events room fills quickly for family offerings.
Posted by Retta Blaney at 11:56 AM