This Weekend—Original Sacred Solo Drama at the Church of the Transfiguration, Cape Cod 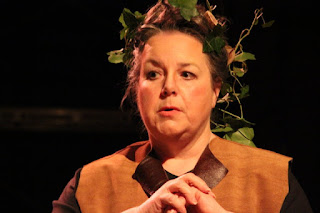 Jan. 31 & Feb. 1—Turmoil. Injustice. Uncertainty. Is there any hope? The wild Oaks are still standing—the secret keepers. Strong promises are held in their deep roots, and ancient wisdom in their bark. Will there be an end to the struggle? Embark on a journey and witness the struggle for peace in a seemingly hopeless situation.

Elements Theatre Company presents Oaks of Mamre: A Retelling of an Ancient Story at the Church of the Transfiguration, Cape Cod. The production is the fourth original solo sacred drama presented by the company’s Artistic Director, Sr. Danielle Dwyer, and is part of the Sacred Drama Series Exploring Transfigured Lives. This gutsy story will be enhanced by originally composed percussive music, as well as a massive set featuring a big Oak tree over twenty feet tall.


“We commend this theater group for seeking to be agents of change through art.”
—AMERICA Magazine

Under the direction of Sr. Danielle Dwyer, Elements Theatre Company has stirred and inspired minds and hearts of audiences through dramatic storytelling and imaginative stagecraft of both classical and modern works, both nationally and internationally. The Company's commitment to integrity and intensity of language and context, devotion to the transformative work to become the text, and courage to delve into the scope of humanity has resulted in high acclaim for their performance authenticity and honesty.