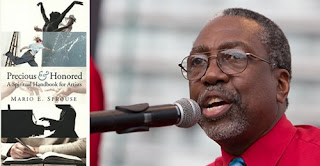 Mario Sprouse is an essential worker in New York City.  Although he hasn’t had a day off since the pandemic struck in mid-March, he is full of energy.  His focus is to heal.

The work that Sprouse sees as essential is that of an artist.  In his case, a composer, musician and musical director.  What he is passionate about healing is the commonly held idea that a career in the arts and a life of financial struggle go hand-in-hand.

“I dislike the starving artist syndrome,” he said.  “It doesn’t honor God’s gifts to us.  I’ve dedicated my life to combatting any of those negative attributes about artists.  We are essential workers.  Always have been, always will be.”

To spread this message he published Precious & Honored: A Spiritual Handbook for Artists, which grew out of discussions with members of his arts group at Marble Collegiate Church in midtown Manhattan.  The theme for one year was Whealth Management for Artists, combing the ideas of wealth and health.

“For 50 years I’ve been dealing with artists,” he said during a telephone interview from his house in Queens, NY.  “Those who look at their skills as God-given don’t look to the world for employment.  They look to God.”

Sprouse made these comments in mid-August, with all of the city’s entertainment industry — concert halls, theatres, dance studios — shut down since March 12, with no date scheduled for reopening.  Even in the face of this, Mario Sprouse seems incapable if despair.

“Performing artists have a unique position at times like this,” he says.  “We are intuitive.  We are seers.  We see the present time and we project into what the future will be.  There’s a lot of no work going on but a tremendous amount of creativity just filling our universe.”

While New York’s theatres have been empty, actors, singers, dancers, choreographers and directors have mastered video conferencing to present musical fundraisers and concerts, perform virtual plays with actors chiming in from their own homes, and costume designers have been pitching in to make masks.

“We’re collaborative people.  It doesn’t matter if I’m on one end of the phone and you’re on the other.  I can collaborate with you and get something done.”

One of his current examples of this is his work with playwright Glynn Borders to bring to new life Borders’ play The Dark Star from Harlem: The Spectacular Rise of Josephine Baker.   Sprouse, who graduated with a degree in music theory and composition from The City College of New York in 1970, wrote the music and lyrics for this show, which was seen in November and December in a full-length production at Off-Broadway’s La MaMa experimental theatre.  Borders is working on a socially distanced script.

“We are creative people, imaginative and creative beyond measure,” Sprouse says.  “It’s always with you.  These times bring out our best.”

Much of the work going on now is unpaid, but Sprouse sees that as a problem for performing artists at any time.

“People are not being paid because we give our work away for free so often,” he says.  “We, as artists, set that up.”

Which is why he published Precious and Honored at his own expense in 2018.  It combines spiritual principles and scripture quotes with the experience of the members of the Marble Collegiate group now called Arts Ministry.  The material is presented simply and clearly through the use of the alphabet and divided into 15 empowering lessons, each fitting for one day’s meditation.  The ABCs of Driving Your Own Car sets the tone, establishing the underlying premise that people can live productive lives “and still make money as the artists we were divinely created to be.” The A is for Authority, with the reminder that “we need to take authority over the gifts, talents and skills that we were given.”  To back this up, Spouse quotes 2 Timothy 1:7:  “For God did not give us the spirit of fear, but of power and love and self-control.”

Similarly B represents Boldness and C, Confidence.  The handbook sells for $12 and is available at preciousandhonored.net. Sprouse was adamant that it would be available only in print so people can touch it, write in it, carry it with them or keep it by their bedside and send it to a friend in a letter-sized envelope.  The title comes from Isaiah 43:4:  “You are precious in my sight and honored, and I love you.”

“We have these gifts, talents and skills as gifts from God so let God direct how we use them.  When you put the A to Z together it’s almost impossible to fail.”

He plans this to be the first in a series, although he doesn’t know yet what the next theme will be.

“I have to talk to God about that,” he says with a laugh, adding that he has decades of possible lessons.

Sprouse has been part of Marble Collegiate’s ministry to artists since the fall of 1982 and now serves as coordinator of Arts Ministry, one of two part-time paid positions he holds there.  He is also the associate director of the live-streaming Marble Vision, from which he is furloughed.

Unlike most churches that began live streaming because of the pandemic, Marble has been doing it for more than two decades, attracting viewers from around the world.  The church is empty now but each Sunday at 11 a.m. worshipers see archival film of full pews and close-ups of the recently restored stained glass windows while listening to and watching the choir, considered to be one of the city’s most beautiful, as well as musicians and soloists.  The service is interspersed with prayers, a scripture reading and a sermon delivered live from the ministers’ homes.  Marble Collegiate is the oldest congregation of the Collegiate Reformed Protestant Church in New York City, organized in 1628 under the Dutch West India Company.  For a half century it was led by the Rev. Dr. Norman Vincent Peale, with people lining up around the block to hear his sermons.  It is still widely thought of as the-power-of-positive-thinking church in reference to Peale’s best-selling book.

Outside of his church work, Sprouse has been involved with cataloguing the massive music/media collection of the late Gordon Parks, the photographer, musician, writer and film director for whom he was the musical assistant for more than 20 years.  He performed at Parks’ funeral at The Riverside Church in 2006, was the music supervisor for three of Parks’ films and produced Parks’ first CD of original classical music.  He has provided musical arrangements for several other short films and musical direction for a number of theatrical events.  Carmen McRae, Hubert Laws, Cornell Dupree, Buster Williams, Freddie Hubbard and Grover Washington Jr. are among the jazz artists who have recorded his musical arrangements.  Orchestrations and original songs written by Sprouse have been performed live by Gregory Hines and Phylicia Rashad.

Sprouse developed his love for the arts growing up in the Bronx, the son of immigrants from the Dominican Republic.  He was surrounded by the sights and sounds of art and music from a variety of cultures and these influence his work today  He attended St. Augustine Presbyterian Church where he learned to play the piano.

“This was the melting pot in which I developed my firm belief that spirituality and the arts are inseparable.  If anyone thinks the arts are not necessary try going through a time like this without music.  Someone recorded it for you.  This pandemic has focused the world internationally on the importance of the arts.  It’s an opportunity.”