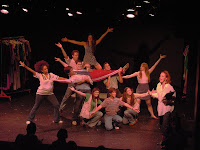 Genesius will be a joy for any lover of the theatre. Billed as “a new musical about the little theatre that could, did and still does,” this spirited new offering goes beyond the let’s-put-on-a-show backstage guts and glory story to tell at its center the true-life story of Jane Simmon Miller, a visionary who co-founded a theatre company for young people in a small town in Pennsylvania, transforming the lives of dozens of showbiz wannabes.

Miller, well portrayed by Beth Glover (in photo at right), was inspired to form her own company in Reading, PA, in 1971, along with Michael O’Flaherty, who wrote the music and lyrics for this show about their efforts.

Through bargaining, finagling and scheming, Miller takes over an abandoned storefront in a run-down part of town and scrapes together the materials to build a theatre space. If anyone tries to oppose her, she tells them she’s doing it for the arts, culture, civilization, and if that doesn’t work, she throws in grandly -- “and for the kids.”

She names her company Genesius in honor of the saint who is considered the patron of actors. When asked if she is religious, she replies: “No, I just think it’s a hoot that the Catholic Church has a saint that was an actor.” (Anyone wishing to see an icon of this early Christian martyr can go to St. Malachy’s/The Actors Chapel on West 49th Street where it is displayed in the back of the church.)

Glover is backed by an energetic and able cast of mostly 20-somethings who sing O’Flaherty’s upbeat songs with passion and, thank God, without belting. I especially liked Tyler Bell as Joey, a teenaged member of the company who also serves as a narrator of the show. In the second act an older Joey is well played by Ryan Mikita.

L.J. Fecho’s book is often quite funny, but can also be poignant. Miller comes off as a real person, and the young performers’ journeys are engaging. I would, though, like to see the show tightened a bit. The backstage antics began to drag for me after awhile in the first act.

The show is directed and choreographed by William Sanders, with musical direction by Greg Brown, Ian Schugel and James Stenborg.  Rod Snyder designed the simple set.

As we were leaving after the show, I experienced a theatre first -- everyone was given a St. Genesius medal. It was like being back in Catholic school -- without the misery.