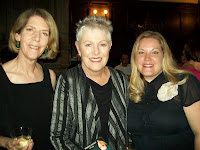 I’m still feeling the glow of Monday night’s Broadway Blessing, and am grateful to all who took part, all who worked behind the scenes, who supported us financially and all 450 or so people who came to the Cathedral for this annual event, now in its 13th year. My baby became a teenager!

I was especially touched by Lynn Redgrave. I had not met her before Monday night but she’s such a warm person I quickly felt comfortable with her. She arrived early, which as the producer I always do, so we had some time to chat just the two of us. At first I had a hard time trying not to stare because I was awed by her beauty. By the end of the evening I understood what this attraction was -- she’s not just physically lovely, she’s lit from within. She really radiates.

I asked her how Liam and the boys were doing and she sighed and said: “They’re taking it one day at a time.” Later, during her theatre reflections she asked everyone to pray for her “beloved niece Natasha Richardson.” I’m sure Natasha received many prayers that night.

Lynn shared more personal information in her talk, mentioning her breast cancer and how she never knows if it will one day shorten her life. With gratitude now she stands in the wings before each performance and thanks God for the chance to be there.

At the hardest time, while undergoing chemotherapy and radiation, she continued performing in Talking Heads, a delightful Off-Broadway show that was a series of monologues, something that is demanding under the best of circumstances. In addition to dealing with the pain and fatigue of treatment, she was worried she’d have “chemo brain” and forget her lines. Three things sustained her -- her faith and her church, her work, and the theatre.

Theatre, of course, was something she was born into. She shared with us how her father, Sir Michael Redgrave, had loved Broadway musicals and whenever he went to New York he always brought back to England the score to the current hit shows. He would play the piano and the children -- Vanessa, Corin and Lynn -- would join him in singing. Such a great image!

She ended her talk by reciting the prayer that sustains her, Psalm 23. I have never heard this most popular of Psalms presented so triumphantly. Her voice sang out at the end: “you have anointed my head with oil; and my cup is running over. Surely your goodness and mercy shall follow me all the days of my life, and I will dwell in the house of the Lord for ever.” I wish I had a recording of it to play every morning, but luckily I can still hear her voice in my head, with its tone of utter faith in God’s providence.

It was so good of her to be with us. She had just flown in from Toronto and was scheduled this week to begin rehearsals for Nightingale, her new Off-Broadway play that is a fictional meditation on the life of her maternal grandmother, Beatrice Kempson. Surely she had many things to do, but she gave us her time and full attention.

I was deeply touched by her generous spirit again after the service. People were flocking around her and I went over to free her so she could get some refreshments at our reception for performers. As I got closer, I was moved by what the people were saying. They were cancer survivors lined up to tell her their stories. They weren't dazzled by her celebrity, they were drawn to her humanity. And she listen intently to each person and asked them questions about how they were doing. Such a special person. Please keep her in your prayers.

As always, Broadway Blessing was blessed with Rabbi Jill Hausman of The Actors’ Temple whose beautiful voice filled the Cathedral with Hebrew prayer and chant. Also making a return appearance was Broadway veteran J. Mark McVey, who sang for us many years ago. This year he performed “A Chance for Me” from the new musical Amazing Grace: The True Story by Christopher Smith. Mark has been workshopping the role of Capt. John Newton, father of the man who wrote one of the world’s most famous songs, “Amazing Grace.” Chris joined Mark for a scene of dialogue in which the father regrets sending his son into the slave trade, wishing he could have a second chance. Accompanying them was my dear friend Phil Hall who had been part of Broadway Blessing two years ago when he presented a song from his poignant work Matthew Passion.

Another good friend took part this year for the first time. Gifted actor Casey Groves performed a scene from Aldyth Morris’ compelling one-man play Damien about the 19th century Belgian-born priest who ministered to the lepers on the Hawaiian island of Molokai before dying of leprosy at the age of 49. Father Damien will be canonized next month by the Roman Catholic Church.

Singer/songwriter Carol Hall was another newcomer to Broadway Blessing this year, lighting up the Cathedral with her song “Circle of Friends” from her fabulous CD Hallways.

The Broadway Blessing Choir, under the direction of Cathedral music director Bruce Neswick, also filled the space with joy, singing medleys from South Pacific and West Side Story.

As always, Rabbi Jill and Tom Miller, Cathedral canon for liturgy and the arts, lit a candle and offered prayers of blessing for the new theatre season. And once again our beloved Project Dance performed, this time with soloist Patrice Djerejian singing “I Sing for You.”

The Rev. Mitties DeChamplain from St. Clement’s Episcopal Church offered a closing prayer, talking about growing up in a theatre family and how the theatre still sustains her. It doesn’t help her forget her problems, she said, but it helps her see them in perspective. Just as tragedy and comedy are both part of theatre, so problems and blessing are all part of life. She described theatre as “God haunted” and I like that very much.

Many others helped to make Broadway Blessing such a great event, but I have to give special high praise to our stage manager, Mike Roche. A gifted actor himself, Mike was volunteering for the second year to help production manager Ken Williams. This year, though, Ken was out with double pneumonia and Mike was left to do Ken’s job as well. With his calm competence he kept the 75-minute show running seamlessly, as if working Cathedral productions were his full-time job. Many, many thanks, Mike.

(Thanks to Lauren Yarger for sending this photo of me, Lynn and Karen A. Lehman, executive director of the Episcopal Actors' Guild.)
Posted by Retta Blaney at 11:40 AM