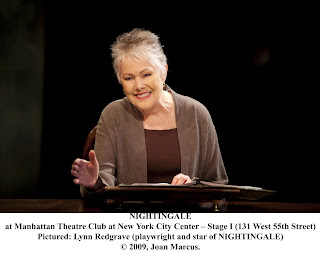 I was deeply moved by Lynn Redgrave's new play, Nightingale, a solo show she wrote in homage to her maternal grandmother, Beatrice Kempson, a woman she barely knew, but one the actress felt needed to come out of the shadows and be given a voice.

For 90 minutes, with no intermission, Redgrave sits behind a little writing desk, script in front of her for occasional prompting, and creates a life for a woman who seems to have been dwarfed by those around her -- her older sisters, her husband, her successful daughter. Redgrave makes her a person in her own right, alternately telling her own story of an unhappy marriage, finding love in middle-age and fighting breast cancer. (It is because of the side effects of recent treatment that Redgrave sits at the desk and keeps the script for referral. This does not in any way detract from the performance.)

Redgrave is a wonderful storyteller, as anyone who saw Shakespeare for My Father -- the play she wrote about her lonely childhood and difficult relationship with her father, the actor Sir Michael Redgrave -- knows. Now, in Nightingale, she and her grandmother, who was called Beanie, share their lives as they never did in real life.

It was the cancer and the breakup of her long marriage that sent Redgrave on an exploratory mission to seek solace. She visited her grandmother’s grave and found her name had been washed away. Because she knew so little about her grandmother, Redgrave decided to imagine a life for her, using basic facts as the structure.

Beanie's had been an arranged marriage to a man she barely knew, and Redgrave allows her to voice her disappointment. “Marriage seemed like such an exciting idea until it happened,” she says in the voice she uses for Beanie. She parallels her own story of marrying a man she hardly knew -- they decided to marry having dated for only three weeks.

She imagines the indignity and horror the marriage bed would have been for her Victorian grandmother, then alternately admits she had known little about sex and that her marriage had been unfulfilling in that regard.

One scene that particularly touched me was when the mature Beanie went with her husband to see their daughter, Rachel, perform on the London stage. After the show they went backstage to see her and were told that “Lady Redgrave” would be with them shortly. Beanie is indignant that her daughter, whom she had always treated coldly, would keep them waiting, and her own sense of inadequacy is apparent. “So strange to hear her called that,” she says. “To remember that little pinched face, the little sticky hands clinging to my dress. Now a lady. A married woman. A star.”

Joseph Hardy directs this reflective show, which is produced by Manhattan Theatre Club. It's billed as a play "about a promising woman stymied by society and all but erased by history, a touching personal tribute and a resounding song for all those people whose voices we've lost, or never known." I love that sentiment.

Redgrave is a special woman, as I learned when I met her in September. She was our speaker at Broadway Blessing, the interfaith service I founded and produce. She talked of how her faith had helped her through her cancer diagnosis (she is now Stage IV) and treatment. I was glad to be able to go backstage after Nightingale to give her a hug and tell her once again that I’m praying for her everyday. She was gracious and welcoming, a beautiful woman in every sense. Please keep her in your prayers.

Tickets for Nightingale are available at the New York City Center box office, 131 W. 55th St., CityTix at (212) 581-1212 and www.nycitycenter.org. The show is currently scheduled through Dec. 13. For more information, visit www.ManhattanTheatreClub.com.
Posted by Retta Blaney at 1:53 PM