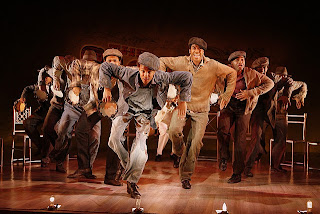 This story of racism and injustice in 1930s Alabama would seem an unlikely subject for a musical, but as told by John Kander and Fred Ebb, the creators of such classic works as Cabaret and Chicago, it is a mesmerizing evening of theatre, so powerful I was in tears at the end.

Directed and choreographed by Broadway superstar Susan Stroman, the story is portrayed in part as a minstrel show, which is appropriate considering the grotesqueness of the actual case. In 1931 nine black teenagers were falsely accused of raping two white prostitutes and spent the next six years in jail through various trials and appeals.

The 13-member cast, headed by Broadway veteran John Cullum, is excellent, especially Brandon Victor Dixon as Haywood Patterson, the most volatile member of the groups and the one lease able to tolerate the injustice. When he stands alone in a spotlight to sing “Nothin’” he acknowledges the frustration of his situation, that he’s done nothing wrong but is going to die. It’s soulfully moving. In the song “Go Back Home,” another of the straightforward numbers, he sings longingly of his desire for freedom. It’s a beautiful, show-stopping moment in which he is joined by Cody Ryan Wise, who plays Eugene Williams, at 13 the youngest of the accused, and the Scottsboro Boys.

Most of the numbers are all-out razzle-dazzle, with singing, dancing, some tambourine playing, tapping and strobe lighting, reflecting the carnival-like atmosphere surrounding the case that attracted national attention and helped spark the civil rights movement. I was reminded of the court scene in Parade, Jason Robert Brown’s 1998 Broadway musical about another southern travesty of justice, the lynching of Leo Frank, a Jewish factory manager in 1913 Georgia who was falsely convicted of raping and murdering a 13-year-old girl in his employ. In that case it was anti-Semitism that doomed him.

Adding to Scottsboro’s effect is that it’s done in just under two hours with no intermission. This heightens the tension and the drama, as does the sheer simplicity of Beowulf Boritt’s set, which consists only of straight-back silver chairs and a few planks. David Thompson wrote the musical’s book, nicely recounting the facts of the story and developing the characters as people we care deeply about.

The show will be moving to Broadway in the 2010-2011 season, which is where it deserves to be. It definitely has a large wow factor. The final scene is such a quiet, dignified contrast to the larger showbiz effect of the whole that I started to cry. At the curtain call I looked at a fellow Drama Desk voter who was sitting next to me and he looked back with his eyes wide, speechless at first. It really is an amazing show. I’m sorry lyricist Ebb, who died in 2004, didn’t live to see it.

The Scottsboro Boys has been extended to run through Sunday at the Vineyard Theatre, 108 E. 15th St. Tickets may be reserved online at www.vineyardtheatre.org or by calling (212) 353-0303.
Posted by Retta Blaney at 8:47 AM