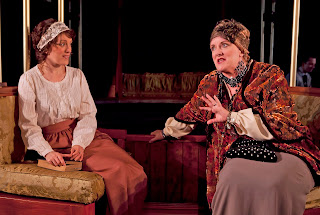 When A Little Journey opened on Broadway in 1918, a critic for the New York Herald wrote that audiences were so moved they lingered in their seats afterward “to cling to the men and women of Miss Crothers’ imagination as one would hold onto friends.”

I felt the same way at Monday night’s opening of the Mint Theater Company’s revival of this sacramental play by Rachel Crothers, which is expertly directed by Jackson Gay. As we were standing to leave I said to my friend Brenda, “I want to see this again.” The next morning I started e-mailing my Drama Desk friends to ask them if they were going and had an extra ticket would they please take me. And dear Brian came through -- I went again last night and was so grateful to be back in that world with those special characters.

I haven’t been able to stop thinking about this play, and don’t want to. It’s a simple story, set in 1914, of people thrown together on a westbound train from New York in what will end up being a life-changing four-day journey for each of them. The first two acts are charming as we get to know the characters -- Julie Rutherford (Samantha Soule, in photo left), a dispirited young woman who is ready to jump from the train because she feels the future holds nothing for her; Jim West (McCaleb Burnett), a young man who has reformed his life by giving up alcohol and opening a ranch to help others get sober; Mrs. Bay (Rosemary Prinz) a hard-of-hearing grandmother traveling with her granddaughter, Lily (Chet Siegel); Annie (Jennifer Blood), an unwed mother with her baby; two college students, Frank (Ben Hollandsworth) and Charles (Ben Roberts); Mrs. Welch (Laurie Birmingham, in photo right), a demanding busybody; Mr. Smith (Douglas Rees), a cantankerous old man who prefers to stay holed up in his cabin and the ordered-about porter (Anthony L. Gaskins). The acting is first-rate across the board.

Martha Hally’s Victorian costumes, Paul Whitaker’s lighting and Jane Shaw’s sound design enhance the mood perfectly, and Roger Hanna’s set is a joy -- train seats on a revolving stage that allows each of the characters some time in the spotlight as their stories unfold.

As delightful as the first two acts are, it was the third that really did it for me. Up until then I had been enjoying the play immensely, which is my typical reaction to a Mint show. That company consistently presents the highest quality productions of any Off-Broadway theatre. In Act Three, however, the tone becomes deeply spiritual as the characters are brought together by an event that strips them of their egos and status (jewelry and expensive clothing gone), their loneliness and even their racial differences. With no private compartments to escape to, they form a primitive gathering around a bonfire, presenting a vision of the Kingdom where everyone is united and “there’s plenty of room.” It is so quietly powerful that my heart fills whenever I think of it. I don’t want to spoil the ending for you by saying more, but in looking back on it and then experiencing it again I can see how skillfully Crothers set the stage for this journey’s end.

A Little Journey, which was a nominee for the first Pulitzer Prize for Drama, is the second Crothers play I’ve seen at the Mint. My friend Peri and I were moved by her Susan and God in 2006, but Journey has affected me more deeply.

This kind of reaction has followed the play from the beginning. Its original production was greeted by the New York Times as “a simple, moving story deftly and very convincingly told.”

Crothers was inspired to write the play while riding on a train. She was struck by how travel “brought together such characters as I required.”

After playing for 252 performances on Broadway, A Little Journey toured the country, making notable stops in Washington and Chicago. In 1927, it was made into a silent film (now lost) starring Harry Carey, Billy Haines, and Claire Windsor. A handful of amateur and stock productions followed in the 1920s and ‘30s, but then it was the end of the line. The train stopped, and A Little Journey hasn’t been seen since.

Finding and resurrecting these lost gems is the mission of the Mint. Plays like this shouldn’t be allowed to be lost to history. Like any well-written work of literature, A Little Journey is perfectly at home in any era.

As for Crothers (1878-1958), she was among America’s most successful and produced playwrights during the first three decades of the 20th century. Nearly 30 of her plays opened on Broadway between 1906 and 1937.

“Although it rare now to find anyone who has heard of her,” wrote the New York Times in 1980, “Miss Crothers at the apex of her career was a symbol of success in the commercial theater.”

Program notes offer interesting insights into the writer and her plays, which often highlighted her interest in strong women characters and social concerns.   A Man’s World (1910), heralded by one New York critic as the “first great American play,” followed a young woman’s struggle to establish an artistic career while raising an adopted son.  Nice People (1921) examined the flapper phenomenon through the eyes of three young women and provided Katharine Cornell and Tallulah Bankhead with their first important roles.  In Susan and God (1937), a socialite discovers the difference between public façade and personal faith while reconciling with her husband and daughter.

According to the notes, Crothers directed her own work.  Her consistently high standards helped professionalize the role of director in American theater.  She was also a dedicated philanthropist.  She helped found many important charities, including the American Theater Wing for War Relief (established 1940), which evolved into today’s American Theater Wing.

By the late 1940s, the program notes continue, Crothers’ comedies fell out of fashion.  She continued writing, but she did not produce any new plays, preferring to focus on her charity work. She died in her sleep on July 5, 1958.  The Times wrote in her obituary “She was as skillful as she was prolific.  Miss Crothers mixed an enormous amount of common sense with smooth craftsmanship and a rare knowledge of and faith in human nature.”