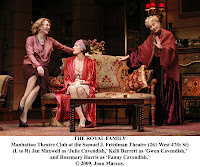 The Royal Family is a good old-fashion Broadway comedy, a bit dated now, but lots of fun. George S. Kaufman and Edna Ferber's 1927 play about an American acting family who live, breathe, eat and sleep the the-a-tah has been lovingly revived by Manhattan Theatre Club at the Samuel J. Friedman Theatre.

From the rising of the curtain to reveal John Lee Beatty’s sumptuous set -- the Cavendishes’ palatial Park Avenue duplex -- to its setting about two hours and 45 minutes later, The Royal Family bounces along in high spirits and craziness, a spoof of a theatrical clan patterned after the Barrymores. The ensemble cast is excellent, headed by Rosemary Harris (right in photo) as aging matriarch Fanny Cavendish and the delightfully looney Jan Maxwell (left in photo) as her daughter, Julie. Throw in ne'-er-do-well son Tony (Reg Rogers), ingenue granddaughter Gwen (Kelli Barrett, center), their longtime devoted manager Oscar Wolfe (Anthony Newfield at the performance I saw), and mix with a few loyal servants and you’ve got a regular Grand Central Station of showbiz fun.

The “plot” thickens when the Cavendishes’ cozy insular world is threatened two outsiders, Julie’s former lover Gilbert Marshall (Larry Pine) and Gwen’s boyfriend, Perry Stewart (Freddy Arsenault), non-thespians offering the escape of a quiet married life far from the footlights. The bloodline and its traditions are at stake for Fanny who considers marriage an “incident,” not a way of life.

Under Doug Hughes’ careful direction, the zaniness remains lively but avoids going over the top. Maybe he is drawing a bit from his own experience, having grown up in a theatrical family himself. He's the son of actors Barnard Hughes and Helen Stenborg.

Tony Roberts opened Thursday night in the role of Oscar, but by Sunday afternoon when I was there was out for rest. He had become ill one week earlier during the Sunday matinee, which was then canceled, with what is being described as a minor seizure. His understudy, my Episcopal Actors’ Guild friend Tony Newfield, has been performing in Roberts’ absence. And he is perfect!

Casting this play wasn’t always easy. Harris said in a recent interview that the Barrymores were too revered in 1927 when it first appeared and matriarch Ethel apparently was not pleased. “Actors didn't want to be in it, because they didn't want to upset the Barrymore family,” Harris told Playbill.com. “A season or two before the play, all three of them were playing on Broadway simultaneously, the sister and two brothers."

A musical version of The Royal Family, written by Tony Award-winner William Finn (Falsettos), has never had a full production. Too bad. If ever there was a family ripe for bursting into song it’s the Cavendishes. These are people who love to be center stage, and they don’t just go from room to room, they make grand entrances and flourishing exits -- in their own home.