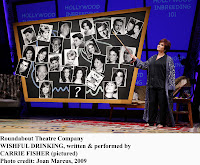 My friend Mary and I don’t remember when we’ve laughed so hard at a Broadway play as we did at Wishful Drinking, Carrie Fisher's darkly comic one-woman memoir show, now at Studio 54. Covering a large span of her 52 years, Fisher recounts her bizarre youth as a child of Hollywood (Mom -- actress Debbie Reynolds, Dad -- crooner Eddie Fisher), her marriages, motherhood and her well-publicized experiences with substance abuse and mental illness.

Doesn’t exactly sound like fodder for a fun evening, does it? Usually these kinds of celebrity vehicles, with the star on stage alone talking to the audience, strike me as ego trips or desperate attempts to grab some attention. But I was impressed by Wishful Drinking beyond the fact that it’s laugh-out-loud funny. My hat goes off to the way Fisher has been able to step back and look at the totality of her life and present it without bitterness or anger. She has obviously spent a great deal of time working on herself, not just to get off the drugs and alcohol, which would be an accomplishment in and of itself, but to be able to develop such a sense of humor -- and of the absurd -- about events that would have left most people feeling victimized well into adulthood if not for life.

This spirit is on display right from the start as she begins the show singing “Happy Days Are Here Again” and sprinkling glitter, which is already all over her, on the audience. Behind her are huge projections of tabloid headlines about her troubled life, mostly the many trips to rehab.

“If my life wasn’t so funny, it would just be true,” she says.

Thank heavens she’s made it both. One of my favorite parts was her course on Hollywood Inbreeding 101. Standing before a large blackboard full of glossy head shots, she uses a pointer to show how interconnected all the lives would become. Much of it is well known, including her father leaving her mother for Elizabeth Taylor, but trying to keep track of all the relationships that follow is a riot.

Her pace throughout the two hours and 15 minutes is rapid fire. She is quite heavy and looks at least a decade older than her 52 years, but even about that she keeps her wry sense of humor. “Along with everything else I’m a failed anorexic,” she says.

A published memoir under the same title came out during the regional life of the play. It was on the New York Times bestseller list for 14 weeks, and will be available in paperback from Simon & Schuster this fall.

Fisher also has become a respected speaker, with audiences appreciating her candid sharing of her experiences with addiction and bipolar disorder.

The sermon last Sunday at Marble Collegiate Church was about making lemonade out of lemons. It could have been written for Carrie Fisher. She sure knows how to make one delicious pitcher of lemonade.

Wishful Drinking tickets are available through Roundabout Ticket Services, (212) 719-1300, and online at www.roundabouttheatre.org. This limited engagement runs through Jan. 3.
Posted by Retta Blaney at 1:40 PM