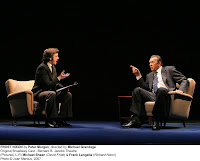 Nixon should have learned the first time. Many people feel he lost the 1960 presidential election in part because of the contrast between his pasty, sweaty appearance and that of the youthful, confident John Kennedy in their televised debate. But when David Frost lured him into a series of interviews in 1977, Nixon’s hubris got the best of him. With a handkerchief and makeup artist at hand, he expected to sail through his conversations with the lightweight talk show host.
Wrong again, Mr. Nixon. The story of this encounter and what led up to it is the subject of “Frost/Nixon,” the engaging new play by Peter Morgan, brilliantly acted by Frank Langella (Nixon) and Michael Sheen (Frost).
It’s easy to see why Nixon expects a cakewalk. No one has any faith that the playboy interviewer can play hardball with the former president of the United States. “I spent yesterday watching you interview the Bee Gees,” one of his advisors says when Frost announces his intention to go after a Nixon interview.
After outbidding serious journalists like Mike Wallace by agreeing to Nixon’s $600,000 demand, Frost puts up $200,000 of his own money to get the process rolling. Still, the networks aren’t interested, nor are advertisers. Frost expects biggies like IBM and General Motors but ends up with Weed Eaters.
When the time actually comes for the series of taped interviews, Nixon skillfully evades Frost’s questions, “flicked away like no more than a fly,” one of his advisors says. “It was like watching a dead man come back to life.”
The stress builds as Frost tries to make the best of it. The play is so artfully written that even though we know the outcome, we feel the pressure heating up. Frost becomes the victor, though, in the final session, getting Nixon to admit he participated in the Watergate burglary coverup and that he had let down the America people. And the four 90-minute shows that result from the nearly 29 hours of taping end up capturing the largest audience for a television news show in history.
Director Michael Grandage makes great use of the cat and mouse game between the two men, giving us what seems like split screen glimpses into each side’s comments before and after the tapings. He also has mounted a couple dozen TV monitors as one large picture behind the men’s chairs so the audience can see the close-ups, just as we would if we were watching at home. This technique proves most powerful at the end after Nixon confesses and we see his pathetic, bewildered face.
It is then, after all the excitement of the chase and evasion, we understand that the conqueror should have been more apparent from the beginning. Although he had never voted and had no political interests, Frost was bound to be the victor. As one of his advisors says, “He understands television.”
A lyric from the “Springtime for Hitler” number in “The Producers” would have been appropriate for this show:
“It ain’t no mystery,
If it’s politics or history,
The thing you gotta know is,
Everything is show biz.”
“Frost/Nixon” is politics and history -- and show biz at its best.
Posted by Retta Blaney at 4:00 PM No comments:

This is the second excellent production of a play from the 1950s I have seen in the last month, and both times the shows featured themes that should have made them dated by now. Unfortunately, homophobia and debate over teaching evolution are as timely now as they were when “Tea and Sympathy” and “Inherit the Wind” were originally presented.
I saw my first production of “Inherit the Wind” in the early 1980s at Baltimore’s Center Stage and wouldn’t have imagined that a quarter century later its story would still be current. “Wind” is a fictionalized retelling of the 1925 Scopes Monkey trial, named for John Scopes, a science teacher in Tennessee tried and convicted for teaching Darwin’s theory of evolution in violation of a state law forbidding the teaching of any theory that conflicted with the biblical account of divine creation. The fiery case pitted famed defense attorney Clarence Darrow against three-time presidential candidate William Jennings Bryan.
The fictional defense lawyer, Henry Drummond, played to perfection by Christopher Plummer, knows human nature when he asks his young client, “You don’t believe this kind of thing is ever finished, do you?” He wants Bert Cates (Benjamin Walker) to fight for the right to teach evolution as a way of opening doors for the next person to do so. And yes, people are still fighting this fight.
Even if the issue weren’t so relevant today, this revival of “Inherit the Wind” would be well worth seeing. The two hours flew by, filled with strong performances across the board -- Brian Dennehy plays Matthew Harrison Brady, Mr. Plummer’s sparring partner -- great staging that includes seating audience members on stage to give the appearance of a full courtroom and a lively gospel quartet that had us clapping along before the show began.
As it happens, this production is both well staged and timely. When people are afraid to hear something counter to what they’ve always believed -- then or now -- they react strongly. “The right to think is not on trial here,” the judge, played by Terry Beaver, says.
“The right to think is very much on trial here,” Drummond shoots back.
But Brady is unmoved. “I do not think about things I do not think about,” he says smugly. He is supported wholeheartedly in his fight against the teaching of evolution by the townsfolk, who carry signs proclaiming “Take Back America for Christ.” I’ve received phone calls and mail expressing this same message.
I wonder what the authors, Jerome Lawrence and Robert E. Lee, would have thought if they could have peeked into the future and seen their story still playing out today. Would they have bothered to write the play? Theater, after all, is meant to make people think, but too many people don’t think about what they don’t think about.
One person in town does understand, Rachel Brown (Maggie Lacey), Cates’ girlfriend and fellow teacher. “It’s not as simple as that, black or white, good or bad,” she says.
She’s right, but one has to think to understand this. The others are too busy accepting unquestioningly what they’ve always heard. Drummond understands the reason. When Brady dies at the end of the trial, Drummond defends him as a great man who “got lost looking for God too far up and far away.”
As do so many people, which is why “Inherit the Wind” will likely have a future full of timely revivals. An even older source than this 52-year-old play tells us so. It’s from Proverbs, chapter 11 verse 29: “He that troubleth his own house shall inherit the wind: and the fool shall be servant to the wise of heart.”
Posted by Retta Blaney at 8:56 AM No comments:

A Moon for the Misbegotten

One would think the subtitle of this revival was “Comedy Tonight” the way the audience laughed heartily throughout. But Eugene O’Neill wrote only one comedy, and “A Moon for the Misbegotten” isn’t it.
Laughter is appropriate, of course, in the first act. It’s the natural reaction to the shenanigans of Josie and her father as delightfully enacted by Eve Best and Colm Meaney. It’s tremendously fun to watch them, especially in the scene where they make sport of T. Stedman Harder (Billy Carter), the neighbor who despises them.
The second act, however, is not funny. This is where a broken man, overcome by alcoholism and guilt, pours out his grief to the woman whom he secretly loves and who has secretly loved him for years, and she offers him forgiveness. It is the only O’Neill play in which a tortured character actually receives absolution. “I am the one person who loves you enough to forgive you,” Josie says. It should evoke a sense of connection to this man’s -- and woman’s -- pain and loneliness. But at the performance I saw Friday night the audience laughed almost continually. The only reason I can figure for this inappropriate response is Kevin Spacey’s take on the role of Jim Tyrone. He had an almost vaudeville-like delivery; I half expected him to hold up a pretend cigar Groucho Marx-style as he raced through his lines. But Jim’s despair is not the stuff of comedy. “I knew I was lost with all hope gone,” he tells Josie. “All I could do was drink myself to death.” That kind of hopelessness shouldn’t draw a laugh.
I have seen this play at least two times before, once at Baltimore’s Center Stage, where excellence is the norm, and again when it was last revived on Broadway in 2000 with Cherry Jones and Gabriel Byrne, and I’ve seen the Colleen Dewhurst and Jason Robards version on video. Each time I was able to come to a sense of sadness for Jim and Josie, but his time I only felt it for Josie. Ms. Best shines as Josie in the second act, portraying her vulnerability and the virginal quality that I felt with Ms. Jones but not Ms. Dewhurst.
While Ms. Best was fabulous with this side of Josie, I had more trouble with her in the first act. It was hard to see this acclaimed British actress as the great cow of a woman O’Neill envisioned. Besides being physically far from a great cow, she seemed too wholesome and girlish to bring off Josie’s tough false bravado. Ms. Jones achieved this balance better than either Ms. Best or Ms. Dewhurst. (Both Mr. Byrne and Mr. Robards were right on the mark as Jim. I don’t remember the names of the actors I saw at Center Stage, but they were solid.)
I enjoyed this performance in spite of my problems with Mr. Spacey’s Jim because I cherish this play and I tried to focus on the characters, and actors, I loved instead of this one actor’s unfortunate portrayal. My desire for this interpretation of Jim is similar to Josie’s desire for her Jim: “May you have your wish and die in your sleep soon, Jim darling. May you rest forever in forgiveness and peace.”
Amen!
Posted by Retta Blaney at 10:48 AM No comments: