When your brain won’t cooperate, you have to get creative 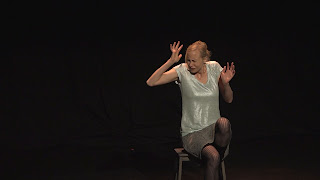 Rhonda Badonda wants to function normally… Her brain has other ideas.

Dive into the shape-shifting landscape of the mind as Rhonda unscrambles a hidden medical mystery and encounters the truth of her baffling and bewildering world.

When your brain won’t cooperate, you have to get creative.

Rhonda Badonda:
The Adventures of a Girl with a Pain in Her Brain
Written & Performed by Rhonda S. Musak & Directed by Gareth Hendee
2 Performances: October 23 & 24

Presented as part of Theaterlab’s TLabShares Program, Rhonda Badonda: The Adventures of a Girl with a Pain in Her Brain (solo show) at Theaterlab, 357 W. 36th Street, 3rd FL (between 8 & 9 Avenues) for 2 performances Monday, October 23, 7:30 PM & Tuesday, October 24, 7:30 PM. Each performance will be followed by a short talkback. Tickets are $21 and can be purchased at www.TheaterlabNYC.com.

From the time she was a child and far into adulthood, Rhonda was squeaking by. Is she dumb? Or is it something else that is holding her back and making life so challenging? Why does she need so many self-help books and even a dating coach? At the heart of Rhonda Badonda are themes of determination and persistence tied together with a medical mystery. It is an often-hilarious autobiographical story of one woman's journey dealing with the learning disabilities that impact every area of her life—learning disabilities that had gone undiscovered.

Audiences will venture with Rhonda inside her brain, a bizarro-world terrain that shape-shifts continually leaving her lost, confused and ultimately more and more determined to get to the bottom of what's wrong with her.

"Beautiful…a credit to the solo show format. Rhonda Musak…fills the stage with motion and personality. She slips into her many characters with ease…lovingly crafted and portrayed…a story she tells with glowing wit and humor. Rhonda Badonda shines in its expression of the beauty and strangeness of the mind." Plank Magazine