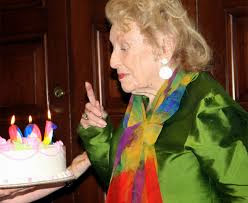 We lost another beloved Dutch Treat Club member, Bel Kaufman, who died at her home Thursday at the age of 103. Bel was the author of the best seller Up the Down Staircase and a ball of fire almost to the end.

I loved her 100th birthday celebration on May 10, 2011. We all stood as she walked into our dining room at the National Arts Club and sang “Happy Birthday.” We saluted her with champagne and KT Sullivan, cabaret superstar and DTC president at the time, led us in singing “Young at Heart.”

Bel was the speaker that day. (Each week our Dutch Treat Club luncheons feature a singer and a speaker.)  Bel stood at the podium for about 45 minutes talking about her remarkable life. Her mind was as sharp as could be. It had to be — she was also teaching a college literature class.

Her body was sharp as well. She was taking tango lessons — at 100.

She continued coming to lunches at 101. God bless you, Bel. I hope you find a good tango partner in that great beyond.

And please, God, don’t take anymore DTC members for awhile. Three in one week is too many. First Kay Arnold on Tuesday, then Peggy Burton and now Bel. Leave us alone for awhile, OK?
Posted by Retta Blaney at 12:19 PM No comments:

Kay Arnold dies -- she will be greatly missed 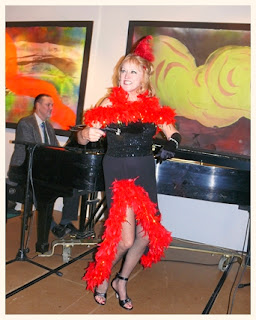 One great big shining star left our showbiz world on Tuesday, singer and actor Kay Arnold. It is a shock to all of us who loved her. She had to have been the happiest person I ever met. I always headed straight to her when I saw her in the room.

I knew Kay through the Dutch Treat Club and the Episcopal Actors’ Guild and loved spending time with her. She had an infectious laugh and always seemed to be having fun. I never saw her act and she never achieved the fame of her nephew Tom (although she had a recurring role on his then wife's TV show as Roesanne’s father’s girlfriend), but I heard her sing at the DTC holiday galas and EAG events. She had a personality that just wouldn’t quit, as you can see in this photo at the National Arts Club where she was entertaining us DTC-ers.

Details of her passing are few and no memorial has been finalized. Please keep her in your prayers.

I will miss you, Kay. You were a joy to be around. God bless you.
Posted by Retta Blaney at 3:22 PM 1 comment:

The Pianist of Willesden Lane 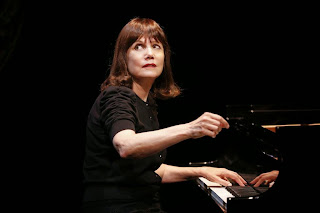 I think I have just seen the highlight of the 2014-2015 theatre season. I can’t imagine I will be as touched by any show between now and May as I was by The Pianist of Willesden Lane, which opened last night at 59E59 Theaters.

For most of the hour and 45 intermissionless-minutes I was unaware of even being in a theatre, so immersed was I in the story and the music and the performer who brought them to life. I was transported to Nazi-occupied Vienna and war-ravaged London, experiencing that world with a cast of characters who were as real to me as if I had known them.

Mona Golabek is not an actor, but she doesn’t need to be. Her passion for her story is nothing that could be learned. It has been lived by her family, most especially her mother, concert pianist Lisa Jura.

Adapted and directed by Hershey Felder, based on the book The Children of Willesden Lane: Beyond the Kindertransport: A Memoir of Music, Love, and Survival by Mona Golabek and Lee Cohen, this one-woman play begins in 1938 Vienna where 14-year-old Lisa lives for her Friday afternoon piano lesson with her master teacher. She has inherited her love for music from her mother, also a pianist.

I admire Golabek for sharing their story. Solo plays are always hard, but I can’t imagine what it must be like to portray so much trauma from her family’s history, night after night. Wisely, she steers clear of heightened emotions, avoiding expression of anger, judgment or sentimentality. The story holds all the emotion one needs and she serves it well by her straightforward, gentle telling. I was not the only one crying at end. I could hear people sniffling and blowing their nose all around the theatre.

Alone onstage with only a Steinway grand, Golabek assumes the voice of her mother to tell the story. Young Lisa dreams of making her concert debut playing Grieg’s Piano Concerto at Vienna's storied Musikverein concert hall as she makes her way by streetcar to her beloved piano teacher. But she learns that her lessons are to be no more; he sadly tells her that because of new ordinances under the Nazi regime, teaching a Jewish child is now forbidden. Assuming the voice of the professor, Golabek recounts his regret that he is “not a brave man” as he bids his student farewell.

“You have a remarkable gift, and no matter what happens in your life, please never forget that. Good luck, Lisa. And Lisa, go with God.”

Shortly after, Lisa’s parents make the difficult decision to send her to England with the one Kindertransport ticket her father has been able to secure. Her older and younger sisters will remain. It is because of her musical gift that she is chosen. At the train station, her mother imprints on her the reason to live.

This charge propels Lisa to leave the grand English country estate where she is sent as a seamstress after she is forbidden to play the owner’s piano. She takes a train to London, finds her way to the organizers of the Kindertransport at Bloomsbury House and secures a two-week stay at a hostel run by a kindly woman named Mrs. Cohen.

The hostel is overflowing with refugee children, but Lisa is barely inside the door when she spots a piano and knows she has found her home. She goes over and begins to play the second movement of the Grieg concerto.

“Mrs. Cohen sat down in a chair, in disbelief. Through the living room window, I could see the neighbors outside. They put down their gardening tools and listened as the music drifted toward them.

"And one by one, the children came out of their rooms. There were dozens of them. They stool on the staircase in silence, listening.”

Lisa did indeed find a home there, and family with Mrs. Cohen and the children. She worked long hours sewing in a factory and playing the piano at night, even staying behind alone to play as the others fled to bomb shelters during the Blitz. Golabek brings all of these characters to life vividly.

Throughout the recounting of her mother’s life, Golabek plays appropriate works from Beethoven, Debussy, Chopin, Bach and, of course, Grieg. And she tells an affirming story of life and love and beauty that Lisa found through her music in spite of all the pain and loss that surrounded her.

I won’t give away the ending of what happened to Lisa’s parents and sisters, but will say that thanks to the encouragement and support of Mrs. Cohen and the hostel children, Lisa earned a scholarship to the London Royal Academy of Music and became the concert pianist she had dreamed of becoming as a child in Vienna.

Golabek has followed in her footsteps, having performed at the Hollywood Bowl, the Kennedy Center and the Royal Festival Hall. Standing ovations are automatic on Broadway these days, and rarely merited, but as the stage darkened after The Pianist of Willesden Lane, I was one of the first to rise for Golabek.

This limited engagement at 59E59 Theaters, through Aug. 24, marks the show’s New York City premiere, following critically acclaimed, sold-out runs in Chicago, Boston, Berkeley, and Los Angeles. As I walked home up Park Avenue, I considered myself blessed to have seen it.
Posted by Retta Blaney at 6:15 AM 1 comment: