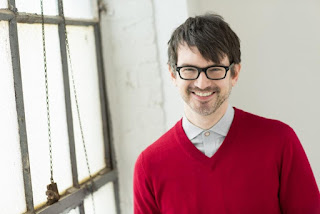 As a junior at Bucknell University, Ken Urban was only vaguely aware of the 1994 Rwandan genocide, but that horror happening a world away would have a strong impact on his future. The trigger came years later, when Urban read Philip Gourevitch's We Wish To Inform You That Tomorrow We Will Be Killed With Our Families: Stories from Rwanda.
The book haunted him and prompted him to read more. Implications of the Roman Catholic church's involvement especially drew him in: Urban was raised in the tradition, with 12 years of Catholic education. The playwright in him saw dramatic possibilities, but it took many years and many drafts to bring him to where he is now, sitting on a stool at the closed bar in Manhattan's 59E59 Theaters, where his play "Sense of an Ending" will have its U.S. premiere Aug. 20 and will run through Sept. 6.
"It feels like the right time to tell this story," he said. "It's not about race in America, but it's a story of race in the world."
At the center of the play are two Hutu Benedictine nuns, Sister Justina and Sister Alice, who have been in prison for five years, suspected of complicity with Hutu extremists in the massacre of thousands of Tutsis, burned to death in a church where they had taken refuge.  As the play opens, the sisters prepare to be send to Belgium for trial for war crimes committed during the genocide in Rwanda, a colony of Belgium’s at the time.
Sister Justina and Sister Alice were inspired by two real-life sisters, Sister Gertrude and Sister Maria Kisito, who in 2001 were sentenced to 15 and 12 years in prison, respectively. Urban said their story needed some tweaking.
"They were so clearly guilty that it didn't give me many places to go as a writer," he said.
He found that the key to dramatizing all the tragedy he was researching was to release his adherence to the facts and blend them with fiction. "Then it crystalized."
"It was more dramatically satisfying to let go of the facts and make the truth more ambiguous."
Truth and its illusiveness are the dominant themes of the play, carried out through the main character, Charles, a New York Times reporter who has lost his credibility with his editors because of plagiarism. He needs to redeem himself and thinks a story proving that the sisters are actually innocent would do that. He arrives in Rwanda for an exclusive interview and sets about to write the story he wants rather than searching for the truth until a survivor comes forth to challenge his quest.
"Americans are really frustrated with moral ambiguity," Urban said.
In crafting his characters, Urban didn't consult any nuns, trusting instead in his Catholic background. Although he is no longer practicing, much of his family is, and his mother recently retired after teaching third-grade religion for more than 25 years at St. Mary of the Lakes School in Medford, N.J.
"The material kind of spoke to me," he said. "I felt I had been educated enough by nuns that I had a good feeling for them."
He said he also didn't consult experts on the genocide and didn't visit the country because airfare was too expensive.
"It was me alone doing lots of research," Urban said.
Part of that research included becoming intimately acquainted with a video interview of a survivor of the church massacre. "I would watch it over and over until I made myself physically sick."
He compared it to the way he remembers experiencing the Stations of the Cross as a child, putting himself in Jesus' shoes.
"I was walking through their steps. That's what theater does," he said. "It was a radical act of empathizing."
But it had its consequences.
"I found myself having terrible nightmares, waking up screaming. I felt I was being murdered by the Hutu militia," he said.
The play received good reviews in its London premiere in the spring, often drawing waiting lists of as many as 45 people for the 60-seat Theatre503. Some survivors told him he had truthfully captured their experience.
"That was gratifying because I haven't lived through it," he said.
As the play explores the role of faith and responsibility in the face of violence, no character is either completely full of blame or blameless.
"They're all deeply human," Urban said. "We would hope that faith makes you responsible to try to stop violence. Is killing people the same thing as not trying to stop killings? Are both morally culpable? It's because I didn't have the answers that I wrote the play."
In addition to writing plays, Urban, who holds a doctorate in English literature from Rutgers University, also teaches the subject, formerly at Harvard and now at Princeton. The London production of "Sense of an Ending" was the result of connections he made in 2011 as a fellow at one of the city's prestigious theatres, the Donmar Warehouse.
As a storyteller, he relates to protagonist Charles, who, as a journalist, is supposed to be a seeker after truth. But in the play, as in life, finding it is not easy.
"It's hard for someone to believe in the truth," Urban said. "The more he goes into it, the more it seems an illusion. The truth is not ever going to be clear. If truth is not possible, what does that mean about forgiveness?"
Charles, who moves from certainty to uncertainty as the play progresses, sums up the quandary well: "What do I do? Tell truths, tell lies, tell what I know, or what I think I know. Tell the readers, our bosses, what they want to know to save my own skin. Maybe the problem is these categories -- truth, lies -- they just don't make sense anymore. Maybe they never did."
Posted by Retta Blaney at 12:12 PM No comments: