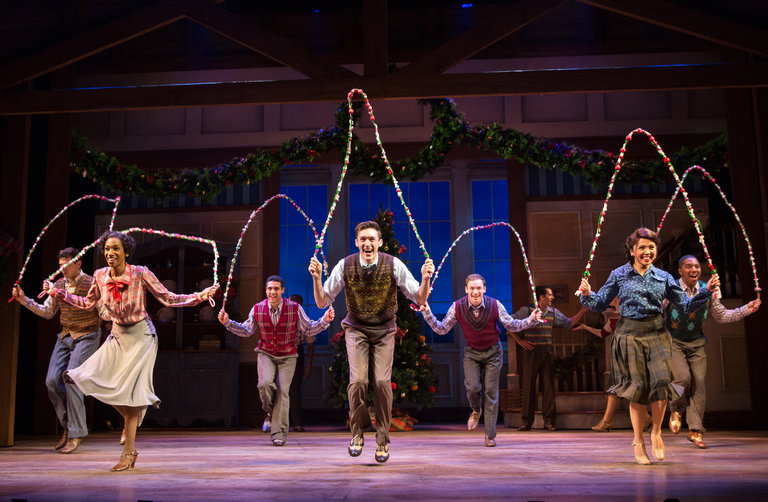 The recently opened Holiday Inn has a subtitle, The New Irving Berlin Musical. Using the word new is a bit of a stretch — the songs are classics and the story was first told in an Oscar-winning 1942 movie. This lack of originality didn’t bother me at all, however, because the Roundabout Theatre Company’s production at Studio 54 is such a shimmering delight. I was happy to sit back and enjoy the old-fashioned entertainment.

Besides featuring some of the best music of the 20th century — close to two dozen Berlin songs, including “Blue Skies,” “Heat Wave,” “Be Careful, It’s My Heart,” “Cheek to Cheek” and “White Christmas” — it’s a visual delight as well, with Denis Jones’ intricate choreography (lots of tap!) and Alejo Vietti’s glittering costumes. Director Gordon Greenberg brings them together in a fast-paced journey into the kind of “putting on a show” musical of yesteryear.

Greenberg and Chad Hodge penned the witty, though predictable, book, which tells the story of Jim Hardy, a likable Bryce Pinkham taking on the Bing Crosby role, who chooses to forsake show business for life on a farm in Connecticut. In doing so he loses his fiancé, Lila Dixon (Megan Sikora), who craves stardom, and for whom one visit to the farm is enough. “I can live with a lot of things,” she tells him, “but I can’t live out here with all these vegetable.”

Before she leaves, though, we do have a fun scene of her being pushed around in a wheel barrow while she, Jim and Louise (Megan Lawrence), the dependable farmhand, sing “It’s a Lovely Day Today.”

Lila’s departure from his life opens the door for Jim to find his true love in a local girl, Linda Mason, played with charm and gorgeous voice by Lora Lee Gayer. The broken-down farmhouse Jim bought had belonged to Linda’s family, but as an unmarried elementary school teacher she could no longer keep it.

Even with his zeal for country life, which he sings about in “Blue Skies,” Jim finds he has no gift for it. His first choice for a crop was bananas. But when his New York friends come to visit he is inspired to combine worlds and he and Linda, a singer who had given up on show business, see an opportunity to turn the farmhouse into an inn where shows are performed for all holidays, which is when his friends are free. Anna Louizos’ sets make beautiful transitions from Thanksgiving, to Christmas, to Easter and the Fourth of July.

As the inn evolves, the dance numbers heat up. With the place decorated for Christmas, Louise and the ensemble sing “Shaking the Blues Away” while tapping up a storm and jumping rope with strands of garland. This is definitely a feel-good musical.

The jokes are cute too. When Jim announces to his agent, Danny (Lee Wilkof), that he’s moving to Connecticut, Danny warns him he’ll “end up wearing plaid and repressing your feelings.” Visiting the farm doesn’t change his mind. “I’m feeling out of place out here,” he tells Jim. “I think I just got stung by a wasp.”

The state is the butt of another joke, this time from Ted Hanover (Corbin Bleu), Jim’s old showbiz partner. When Ted wakes up at the farm hungover and is told of his disgraceful behavior the night before, he is horrified — to learn he’s in Connecticut.

Holiday Inn is a simple story told in rich detail of song, dance and costumes. Its run has been extended until Jan. 15, but I wish it could be longer. I would like to go again.
Posted by Retta Blaney at 1:36 PM No comments: