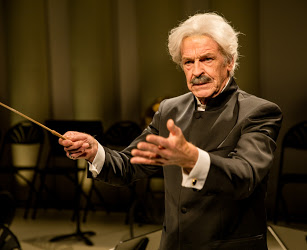 As a concert, Maestro is a lovely show.  As a play, though, it falls far short.  This one-character work about conductor Arturo Toscanini, which opened last night at The Duke on 42nd Street, is missing not just one but three of the major ingredients of a good production.

The first missing element is a strong, convincing lead character.  As Toscanini, John Noble displays none of the  passion of the great conductor.  When he recounts memories of his life and world events he sounds almost bored.

Second, the play — and I use that term loosely — by Eve Wolf lacks a script.  Set within the gloriously performed onstage music of a string quartet and pianist, the words, largely drawn from letters the composer sent to his lover, sound like commentary to supplement the chamber music of Toscanini contemporaries — Respighi, Martucci, Finzi and Castelnuovo-Tedesco.

Finally, under the helm of Donald T. Sanders, the show lacks direction.  It is only the music, which luckily makes up nearly half of the evening, that stands out.

The show begins in 1938 when the 71-year-old Toscanini is exiled in New York and working as the conductor of the NBC Symphony Orchestra.  It flashes back to his life in Italy and Paris, his love life — his lover, Italian pianist Ada Mainardi who is half his age, and a wife with whom he hasn’t slept in decades — his opposition to Fascism and Nazism, which results in his refusal to perform in Italy and Germany, and career highlights, such as conducting an orchestra of Jewish refugees, “the finest musicians of Europe,” in Palestine.

It’s hard to believe such a fascinating life could result in such a  dull play, but Noble is so lacking in energy that it slips by.   What saves the evening is the music, performed by Mari Lee, Henry Wang and Matthew Cohen on violin, Ari Evan on cello, Zhenni Li on piano and Maximillian Morel on trumpet.  They are excellent.

Maesto, produced by the Ensemble for the Romantic Century, plays a limited run through Feb. 9.
Posted by Retta Blaney at 9:36 AM No comments: