'Epiphany' could use an epiphany 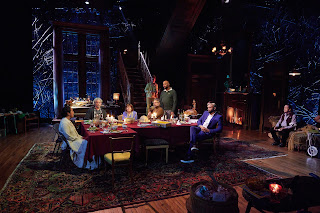 Visually, Epiphany, at the Mitzi E. Newhouse Theatre, is an A+.   Unfortunately Brian Watkins’ play is not.  Obscure is a word I would use.  That might be one of my kindest descriptions.

John Lee Beatty’s set readied me to get into the show, at least I thought it did.  The Playbill describes the setting as a “very old house, on the banks of a large river, just north of a big city.”  Beatty captured this through wood paneled walls, a fireplace with a comfy fire, slightly worn Oriental rugs, an upright piano, side tables holding glasses and candles, a well-stocked bar cart and stairs going to the dark, unseen upstairs and the unseen front door downstairs.

Peaceful, though, doesn’t follow into the play, which is directed by Tyne Rafaeli.  Morkan (Marylouise Burke), an elderly woman about 4’ 10” (if that) is nervously awaiting guests for her Epiphany party, although she doesn’t know what the feast of Epiphany is and, it will come out, neither do her guests.  The time is described as “now, for the most part” but these people must not have heard of Google.  Didn’t they have any curiosity about what kind of party they were going to?

Morkan has recruited Loren (Colby Minifie), a woman in her 20s, to help.  Both are in perpetual motion, with Loren running down the stairs every time the doorbell rings.  Morkan can hardly wait for Gabriel, her nephew, to get there, and as the guests begin arriving, we learn they feel the same way.  This does create an element of suspense but that feeling ends in disappointment.

The guests, who don’t know each other, start a wide variety of pretentious conversations that they don’t finish, which is OK because they aren’t interesting.  Their attention is never far from the eagerly anticipated Gabriel, but when the doorbell rings for the final time and they expect he has arrived at last, a mysterious woman (Carmen Zilles) enters and introduces herself a Aran, Gabriel’s partner.  She tells them Gabriel is suffering from depression and won’t be coming.

Aran brings another of the lovely visual elements of the show, her simple but dramatic outfit — full, flowing winter white pants with a winter white long knit jacket and a torso-filling burgundy scarf (costumes by Montana Levi Blanco).  She has a bit of an ethereal air and offers pseudo-philosophical comments.

The group eventually puts the tables together for their roasted goose dinner.  They light all of the candles and the effect is beautiful.  Morkan soon spoils this atmosphere, though, with a shocking confession.  The final scene is even more bizarre.  If there’s an epiphany in Epiphany I never found it.

All of the cast members do the best with what they’ve been given.  Completing the cast are: C.J. Wilson, as a teacher who drinks too much; Heather Burns, a pianist; Francois Battiste, a lawyer; Omar Metwally, a psychiatrist; David Ryan Smith, his husband and Jonathan Hadary, an old friend of Morkan.

The show runs two hours without an intermission, which is wise because I’m sure quite a few people would have headed out the door.  As it was, a large number of seats were empty at the start.  That could be attributed to summer, or it could be word of mouth.

Posted by Retta Blaney at 3:25 PM No comments: 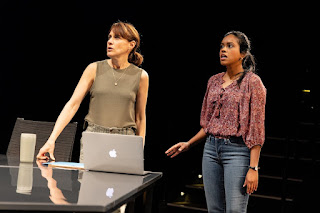 Queen, my first show of the new season, was a delight.    Playwright Madhuri Shekar hits all the right notes with her plot, character development and dialogue.  She turns a story about scientific research into an involving ethical discourse, presented within a well-paced one hour and 45 minutes, at the A.R.T./New York Mezzanine Theatre.

Aneesha Kudtarkar seamlessly directs the excellent cast of four so I felt I was in the lab with these people, watching the drama unfold.  I liked the two main characters, Sanam Shah (Avanthika Srinivasan, right in photo) and Ariel Spiegel (Stephanie Janssen, left), Ph.D. candidates at the University of California Santa Cruz who have spent six years researching what has been killing an alarming number of honey bees.  They are ready to name pesticides produced by The Monsanto Company, an agrochemical manufacturer, as the culprit.  They’re at the final stage of their findings, which are scheduled to be published in a cover story for Nature, the most respected scientific journal in the country.  They will be able to write their own tickets after graduation.

Until Sanam’s final data negates all of their work until then and they don’t have the result they had planned to present.   These two close friends, their professor who heads the project, Dr. Philip Hays (Ben Livingston), and Sanam’s new boyfriend, Arvind Patel (Keshav Moodliar), face the moral decision of what to do with this damning new information.

This is the kind of ethical dilemma I’ve always enjoyed in the plays of Ibsen and Miller.  As performed by these actors, the characters are never preachy or shrill.  They are believable people with a lot at stake.

A subplot to the academic research story is the relationship between Sanam and Arvind, a Wall Street analyst she meets on a blind date arranged by her parents in India who want her to settle down with a successful Indian man.  They are clearly mismatched as she sits looking bored and he talks nonstop.  Finally, too distracted by her research findings, she says she’s going to the lab and, on impulse, invites him back to look at her calculations.  He’s eager, thinking that’s some kind of code for a sexual encounter but she’s only interested in his analyst’s brain because her results are no longer significant.

“If they’re not significant, we have nothing,” she says.

That’s unacceptable to her so he gives it some thought.

“So, if you’ve been getting significant results all this time, until, just now . . . sounds like . . . well, sounds like the threshold effect.”

He stands and points at her.

Who wouldn’t be tempted to fudge a bit when the work of six years and all the expected glory it was to produce are threatened?

The production focuses completely on the characters and story.  Scenic designer Junghyun Georgia Lee wisely keeps the sets to a minimum, little more than lab tables forming a honeycomb that are reconfigured when needed.  Yuki Nakase Link’s lighting greatly enhances the atmosphere with its fluorescent vibe.

I hope Queen will move to one of the city’s major Off-Broadway theatres, with this cast.  It’s worthy of a step up.

Posted by Retta Blaney at 12:38 PM No comments: