Choreographer Lawrence M. Jackson scores the highest points in the New York premiere of Seth Panitch’s Separate and Equal, which opened this afternoon at 59E59 Theaters.  In this play about a racially charged basketball game in Birmingham, AL, in 1951, the three black and three white teenage players flow back and forth across the performance space in what appears to be a slow motion modern dance.  No ball is used; the moves are all pantomimed.  Jackson is given a nice assist by Tom Wolfe who composed original jazz to set the mood and intensify the action.

Unfortunately the player in this creative effort who is responsible for the greatest foul is Panitch.  His 85-minute script, which he directs, is more a sketch than a developed play, and he manages to slam-dunk every racial stereotype of the south in that era.  You’ll hear the expected name calling, like nigger and cracker, see the standard characters like the long-suffering black mother who works as a maid for the superior -acting white lady, and an elderly black man who is called Uncle by the bigoted white police officer.  Those elements were part of the segregated South, of course, but they are overplayed in this short work, which was inspired by testimonials from the Oral History Project at the Birmingham Civil Rights Institute.  Attempts to fill out the story come from flashbacks, during which the non-involved characters lie on the floor while the action is spotlighted.  The one involving a lynching is nicely stylized, but all of these efforts fall short of real plot development. The show felt much, much longer than 85 minutes.

Production designer Matthew Reynolds has made good use of the small Theater B, with seating surrounding the performance space to form a rectangle and give a gym-like sense.  Two blank “backboards” are at opposite ends of the “court” and media designer Maya Champion makes good use of them, starting with the signs that greet the audience before the play — on one a drinking fountain with the word COLORED and the other an identical fountain with the word WHITE.  The division is established from the start.  When video is added, nets appear, with a white hand or black sinking a shot.  It’s easy to feel a game is being played.  In this case, the game just happens to be illegal because whites and blacks were forbidden to play on the same court.

The cast manages to give good performances in spite of the weak script.  I checked the program to see how many of the players were dancers and didn’t see dance in any of their bios.  They have the fluidity and timing of pros.  Their game sequences were the highlight of the show.

Separate and Equal is produced by the University of Alabama in partnership with the Birmingham Civil Rights Museum and the Birmingham Metro NAACP.  It plays a limited engagement through Sept. 30.
Posted by Retta Blaney at 2:06 PM No comments: 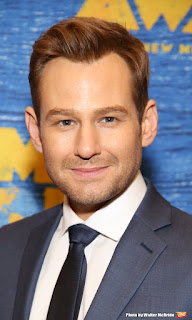 Broadway veteran actor/singer Chad Kimball will headline the 21st annual Broadway Blessing, the interfaith service of song, dance and story that brings the theatre community together every September to celebrate the spirit of the new season. Join us for this free event at 7 p.m. Monday, Sept. 17 at St. Malachy's Church/The Actors' Chapel on 49th Street between Eighth Avenue and Broadway. No reservations are necessary.

I founded Broadway Blessing and produced it for the first 16 years. Last year Kathryn Fisher, a longtime member of the Broadway Blessing Choir, took over as producer and filled the house at St. Malachy’s for a joyful 20th anniversary celebration.

Under the direction of Stephen Fraser, the event will include favorite music from new and classic shows as well as an appearance by Kimball, who is currently charming packed houses in the Broadway smash Come From Away. That musical tells the true stories of the kindness of the citizens of tiny Gander, Newfoundland, to the nearly 7,000 people from around the world who landed in their town unexpectedly on Sept. 11, 2001, after the Federal Aviation Administration stopped all air traffic over the United States following the terrorist attacks. Among the characters Kimball plays is Kevin Tuerff, one of the stranded passengers. Tueff will appear with Kimball.

The entertainment continues as the cast of Desperate Measures offers a peek at this rollicking, good-fun Off-Broadway musical.

The evening will include surprises and participation by Fr. John Fraser, St. Malachy’s pastor, and Rabbi Jill Hausman from the Actors' Temple.

Fr. George Drance, SJ, artistic director of Magis Theatre Company and artist-in-residence at Fordham University, will serve as emcee for the evening. He and Ashley Griffin will share a few moments from Griffin's play Trial, which is directed by Lori Petty.
Posted by Retta Blaney at 12:45 PM No comments: