“You were made and set here to give voice to this: your own astonishment.”
—Annie Dillard
Posted by Retta Blaney at 10:44 AM No comments:

Bill Clinton and Thousands of Others Say Farewell to Marvin Hamlisch

So many tender moments during Marvin Hamlisch’s 90-minute funeral today. His numerous awards -- Pulitzer, Tony, Oscars, etc. -- were mentioned frequently, but what speaker after speaker, including former President Bill Clinton, remembered the composer for most was his big heart. He was, as Clinton said, the “people’s composer” and the humanitarian who couldn’t say no to any request for help.

Hamlisch’s farewell drew a full house -- close to 2,000 people at Temple Emanu-El on Fifth Avenue, among them Liza Minnelli, Richard Gere, Bette Midler, Kelli O’Hara, Diane Sawyer and Bernadette Peters. The choir of 600 included his Broadway friends singer/actress Lucie Arnez, lyricist Sheldon Harnick and orchestrator Jonathan Tunick. Beginning with “The Way We Were,” they sang Hamlisch’s songs from stage and film. We in the audience rose to join them for “What I Did for Love.”

But the most moving tribute was from his wife, Terre, who started out bravely but ended in tears. It was just last week that she lost her partner of 26 years when he dropped dead unexpectedly at the age of 68 after a brief illness.

She remembered the large man with the big smile who lived by the rule “if you can’t say something good about someone, then don’t say anything.” When she was feeling down, he would pull out all the stops to restore her spirits, such as the morning he woke her -- far earlier than she would have liked -- by jumping onto the bed and singing and playing all the parts of a musical (she didn’t say which one), complete with choreography, for the whole show.

And he kept that enthusiasm to the end. She told how it had yet to be announced that he was to take over this fall as director of the Philadelphia Pops. Another friend shared Hamlisch’s pride in the reviews of his latest musical, The Nutty Professor, based on the Jerry Lewis movie. That show, for which Hamlisch wrote the music and which Lewis is directing, is playing in Nashville.

After finishing her remarks, Terre Hamlisch walked over to her husband’s coffin, draped in yellow flowers, for a moment, reaching out to touch it before returning to her seat. It was painful to see her grief, and then again as she walked down the center aisle behind that coffin, tears streaming down her face.

Rest in peace, Marvin Hamlisch. From all that was said, it is clear you were indeed one singular sensation.
Posted by Retta Blaney at 3:49 PM No comments: 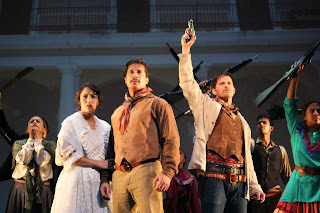 Revolution continues to ferment in musical theatre, at least as engaging subject matter. First came Les Miz, then A Tale of Two Cities, and now Zapata! the Musical, a promising new show which just completed its world premiere at the Pershing Square Signature Center as part of the New York Musical Theatre Festival.

Inspired by the life of Emiliano Zapata (1877–1919), hero of the Mexican revolution, the two-hour show offers a fight for justice, a love story, colorful costumes, lively dancing and songs that capture the soul of each scene.

Director Elizabeth Lucas and choreographer Luis Salgado had to work hard to fit it all on the off-Broadway stage. Even with no scenery except projections and a few props, the 17-member cast, plus the larger-than life story, seemed crowded in the space. I like small musicals, but this isn’t one of them. It needs a Broadway theatre and I hope it gets one.

The strong (for the most part) cast is headed by Enrique Acevedo (third from left in photo) as Zapata, with standout performances by Maria Eberline (second from left) as Josefa, his girlfriend and then wife, and Natalie Toro (left) as his mother-in-law, Senora Espejo. (Zapata! is Toro’s second recent theatrical revolution; several years ago she took command of a Broadway stage as Madame DeFarge in A Tale of Two Cities.)

I found Zapata’s story compelling, but was thrown off by the modern day story of a young Occupy Wall Street member (Andrew Call, fourth from left) that frames it. The young man travels back in time to participate in Zapata’s movement, but if I hadn’t read the press release I’m not sure I would have understood what that was all about. It doesn’t fit well with the rest of the drama, which is certainly strong enough to play on its own.

(Interestingly, this is at least the second time Zapata has found his way into musical theatre. At the end of Ragtime, as Edgar is recounting what has happened to his family members, he mentions that Younger Brother fled south to join “the great peasant revolutionary Emiliano Zapata.”)

This Zapata! features music and lyrics by Peter Edwards and a book by Peter Edwards and Ana Edwards. The songs are rousing or festive, depending on the scene, and Emiliano and Josefa have a couple lovely duets. I was startled several times, though, to hear strains of Jesus Christ Superstar and Evita in the score, almost to the point of what sounded law suit provoking.

While the music was appealing, the sound was not. The show was horribly overly amplified, which was unnecessary in that small theatre and with belters like Toro. This really detracted from the quality of the production. Jesse Vargas provided musical arrangements and orchestrations. Kenneth Gartman was the musical director for the onstage (but unseen) band of eight musicians.

Visually, though, all was well. Asa Benally’s colorful costumes were delightful and Herrick Goldman’s lighting excellent. The show is off to a good start with this production, and I really do hope to be seeing it again on Broadway. It was a high-quality production for the bargain basement New York Musical Theatre Festival rate of $25.

Now in its ninth year, the Festival is the largest annual musical theatre event in America and is widely regarded as the essential source for new material and talent discovery, earning it the name the "Sundance of Musical Theatre."
Posted by Retta Blaney at 12:45 PM No comments:

The 7 Joys of Life 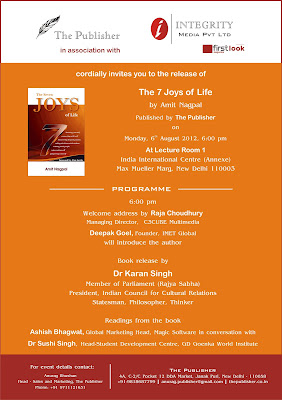 I am proud to be a part of this new book with my contribution, "The Joy of Arts and Theatre."
Posted by Retta Blaney at 4:06 PM No comments: