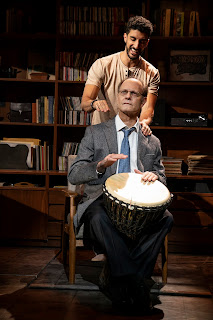 When I read that The Public Theater had in its fall programming a play called The Visitor I wondered if it could possibly be a staged version of the tender and sad 2007 independent film that had touched me deeply.  When I found out it was I was intrigued, until I learned it was a musical and then I was skeptical.

As I was right to be.  This moving story of an immigrant’s experience in New York is ill-served by singing and, even more, by dancing, with a dozen ensemble members nearly colliding with each other on the small stage of the Newman Theater.

People attending the show who haven’t seen the film, which I saw twice because I was so affected by it the first time, may have a different reaction because the same involving story is there.  Walter, a white, late middle-aged economic professor played perfectly by David Hyde Pierce, has more or less given up on life.  He has contempt for his students, which he expresses angrily in “Wake Up,” he has taught the same course for 20 years and hates doing so and is on semi-sabbatical, teaching only the one course, so he can write a book that seems to be about as lifeless as he is.  “The only thing that changes is the day,” he sings despondently.

A widower, everything about him screams bland — his gray suit (costumes by Toni-Leslie James), gray balding hair and wire-rim glasses.  He spends most of his time living in Connecticut but at the play’s opening he makes a rare appearance at his New York City apartment and that’s when his life starts to change.  He walks in to find a young couple, Tarek (Ahmad Maksoud) and Zainab (Alysha Deslorieux), living there.  Undocumented immigrants, from Syria and Senegal respectively, they have been trying to hide under the radar of detection.  When Walter walks in Tarek attacks him, thinking he is an intruder ready to harm Zainab.  After a frightened Walter convinces them it is his apartment, they realize they have been swindled by a conman who somehow got Walter’s keys and, knowing he was mostly absent, rented the apartment to them.

They beg Walter not to call the police, gather their things quickly and leave.  But luckily for them they have left behind a photo album.  Walter runs after them to return it and finds them looking scared and realizes they have nowhere to go.  He surprises himself by inviting them back to stay with him.  That’s when the beautiful story, and Walter’s transformation, begin.

Tarek is a musician who plays his two African drums in the living room.  It’s a delight to watch Hyde Pierce’s Walter eye one of them before tentatively banging out a few sounds, not knowing Tarek is in the bedroom and can hear him.  He’s embarrassed when Tarek appears and encourages him to learn a few notes that he demonstrates on the other drum.  “Feel the beat in your blood,” Tarek tells him and before long they are playing happily, and well, together.  (Music composed by Tom Kitt).  The once uptight Walter even joins Tarek and his fellow drummers playing in the park, boldly soloing in the center of the circle.  Life is good.

Until it isn’t.  Coming home from playing one day Tarek pays his subway fare but his drum gets in his way before he makes it through the turnstile.  Rather than pay another fare, he jumps over the bars and is promptly arrested by two police officers, even though Walter explains that he had paid.  The police release him into the custody of ICE and he is sent to a squalid detention center.

I won’t give away the ending except to say that Tarek’s mother, Mouna (Jacqueline Antaramian), arrives from Michigan where she has lived since she left Syria with Tarek when he was a baby.  She and Walter bond as they try to free Tarek with the help of the immigration attorney Walter hires.

Director Daniel Sullivan keeps the story moving until a song (lyrics by Brian Yorkey) or dance (choreography by Lorin Latarro) interrupt.  I’ve seen other musicals adapted from small films I’ve liked — Once comes to mind — and haven’t felt the singing and dancing were intrusive but I did here.

The show’s book writer, Kwame Kwei-Armah, said in the program notes that he wanted the power of the human gaze “to focus that gaze for the length of the piece, and, we hope, a little beyond, on the power we have collectively to change course, to advocate for justice and to enlarge everyone’s portion, no matter of station or privilege.”  As the book writer, he has been successful in this.

Oskar Eustis, The Public’s artistic director, also commented on the importance of this story:  “The movie on which our musical is based, Tom McCarthy’s powerful 2007 film, “The Visitor,” was created in the shadow of 9/11.  It sought to shake America’s conscience, to combat the anti-immigrant and anti-Arab ugliness that was taking deeper root in our culture, and to wake us to the moral obligations we had to the world.”

Sadly the anti-immigrant and anti-Arab ugliness are still with us.  If this musical works for people as strongly as the movie did for so many of us, then we can be grateful.

Posted by Retta Blaney at 9:25 AM No comments: 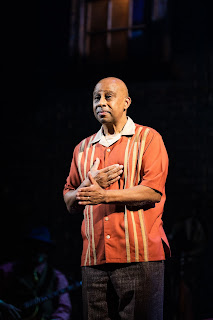 Yesterday I did something I haven’t done in 18 months.  I attended a Broadway show.  And what a gift this first one back turned out to be.  Ruben Santiago-Hudson’s Lackawanna Blues is a loving tribute to the woman who raised him.  It is also a tribute to the man he grew to be as the playwright, director and star of this one-man autobiographical play at the Samuel J. Friedman Theatre.

“Nanny treated me better than my own mother,” Santiago-Hudson says as he opens the play.  For the next 90 intermission-less minutes he portrays Rachel Crosby, better known as Nanny, and the world of her boarding house in Lackawanna, NY, outside of Buffalo, in the middle of the last century.  This world is populated by more than two dozen down-on-their-luck inhabitants, brought to life by Santiago-Hudson with kindness and humor.  “Nanny treated everyone like a human being.”

Nanny was a Black woman from the South who found the freedom and prosperity of western New York so appealing that she encouraged all of her family members and friends to join her, paying for their tickets if necessary to get them out of the Jim Crow south and finding them jobs when they arrived.

“Nanny was like the government, if it really worked,”  Santiago-Hudson tells the audience.

She worked hard enough to own three boarding houses, a taxi service and a restaurant.  It was to one of those houses that the child Ruben arrived, finding far more than just a place to live after his mother, a barmaid who worked nights, largely abandoned him.  He found a surrogate mother.

Scenic designer Michael Carnahan wisely leaves the set bare except for three stools, a small table and a straight-back chair.  The effect of this simplicity, coupled with lighting designer Jen Schriever alteration of light and dark, is to focus all attention on one remarkable storyteller.  The atmosphere is further enhanced through original jazz and blues music by the late Bill Sims Jr. and performed onstage throughout by guitarist Junior Mack.  Santiago-Hudson also livens things up or slows them down with his harmonica playing.

This 64-year-old performer, who received a featured actor Tony Award in 1996 for his role in August Wilson’s Seven Guitars, slides from character to character, using no props, just a change in his voice and facial expressions.  His storytelling feels fresh, especially when he improvises.  When a member of the audience was heard expressing recognition of Nanny’s love of having her scalp rubbed with grease, Santiago-Hudson turned to the audience and said, “This is some Black culture here for you all.”

In the larger theatre world this is the season for Black culture.  If the pandemic doesn’t cause another shutdown, at least seven shows by Black writers will open on Broadway.  The season before Covid, only two plays from Black playwrights were presented, and one of those was a revival.  The prior year featured only one and the year before that none.  Broadway has been criticized for years for its lack of diversity.

Lackawanna Blues was first produced at The Public Theater in 2001.  Santiago-Hudson then adapted it for a 2005 HBO film, with the characters being played by different actors.  It was nominated for an  Emmy Award.

His love for Nanny remains palpable.  When the boy Ruben tells her he wants to die before she does so he won’t have to live without her, she assures him that death is a part of life and that when she dies Jesus will hold out his arms to her and say, “Well done, my good and faithful servant.”

Toward the end of the play he describes Nanny as someone who could “take fragments and make them whole.  That’s just who she was.”

In his final scene he marks Nanny’s passing by looking to the right and up and saying quietly, “Well done,” before soulfully playing his harmonica.  That’s when my tears started, and they continued to fall through the long and well-deserved standing ovation and as I walked up the aisle.  Thank you, Ruben Santiago-Hudson, for such a moving afternoon of theatre.  You blessed my soul.  Now I say to you, well done.

Posted by Retta Blaney at 4:04 PM No comments: