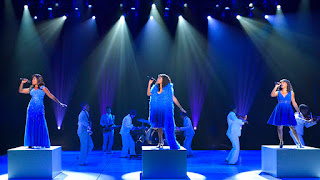 Summer: The Donna Summer Musical lacks one of the major elements that made that singer a superstar — heat.  Her interpretation of songs was hot, but as performed by the three actresses who play her, and as directed by Des McAnuff, they are only lukewarm, making her more the Queen of Easy Listening than the Queen of Disco.  Nothing even begins to sizzle until about a third of the way in when she sings “MacArthur Park,” a song that wasn’t even one of her hits.

An equally major problem for a show that is supposed to be biographical is the weak book by Colman Domingo, Robert Cary and McAnuff, which offers highlights of Summer’s troubled life without much development, sort of like headlines appearing one after the other on a news ticker but with no story to fill them out.  I knew nothing about Summer before I went in and I left feeling I had only vaguely encountered her.  But then how much can you develop a show with two dozen musical numbers— and tell a life story — in only 100 minutes?

Adding to the list of flaws are choreographer Sergio Trujillo’s sexless dance numbers that seem more like a cardio-dance class at the gym — for middle-aged people.

Biographical jukebox musicals like Jersey Boys and Beautiful: The Carole King Musical, and to a lesser degree On Your Feet about Gloria Estefan, might not offer original songs the way new musicals used to, but they tell good stories about the lives of people we’ve been listening to for years.

That should have been the case with Summer, now at Broadway’s Lunt-Fontanne Theatre.  Certainly enough happened in her life to make an involving plot — she was sexually abused for five years by her pastor as a child, she experienced, at 18, being “the only black woman in Munich” while touring Europe with Hair, had a failed marriage, recorded 20 albums and became wildly successful, turned religious and died of lung cancer at 63.  After all, it was the events of her life that inspired her to write all those hit songs.

When I had read that three actresses would be portraying Summer at different stages, I expected a developed life.  LaChanze, as Diva Donna, Ariana DeBose as Disco Donna and Storm Lever as Duckling Donna all sing and act well, but they are held back by the weak script.

They do get to wear beautiful costumes designed by Paul Tazewell, but he goes overboard in being true to Summer’s signature color — blue.  I like that color but I got sick of seeing it in scene after scene, on all three actresses.  It’s a relief when Summer has a rare change of look in a black dress for a funeral and later a striking white pants suit with silver sequins for her “Last Dance” number.

But about that funeral, which was for her former producer and early supporter whom she had abandoned for a new recording label.  While I was relieved to see her in something other than blue, the scene is the weakest by that point.  (Another to come was even worse.)  The lighting, by Howell Binkley, is low.  Summer is center stage surrounded by mourners farther behind her.  They were holding something I couldn’t quite see and I thought, Oh, God, are they lilies?  As they moved forward, I saw that they were.  How cheesy.

It gets even worse, though, when Summer slowly and mournfully sings one of her greatest disco hit, “Dim All the Lights,” turning that great dance song into a funeral hymn.  Question for McAnuff and Ron Melrose (music supervision and arrangements), What were you thinking?

Now for the rock bottom:  Summer, feeling she needs to get back to the religion of her childhood, has a come-to-Jesus scene that finds her singing “I Believe in Jesus,” ending with her hand raised in an evangelical praise salute.  It is awful.

The show concludes with her at Studio 54 singing “Last Dance.”  Reflecting on her life she says, “I wasn’t just at the party, I was the party.”  If her party — career — had been a dud like this we’d never know her name because she wouldn’t have gotten far.

Fortunately she didn’t live to see this memorialization.  Before her death she had been developing an auto-biographical musical, Ordinary Girl, in which she planned to star.  That work became the basis of Summer.  If only she had lived, we might have had a show worthy of her life and talent.
Posted by Retta Blaney at 10:12 AM No comments: