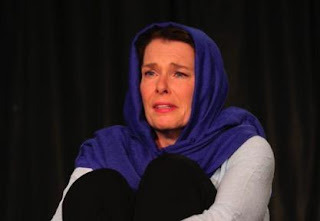 With a baby on her hip and a toddler scurrying around, Susanne Sulby was mixing brownie batter when the television brought 9/11 into her suburban Pennsylvania kitchen. Like many people, she wanted to do something but as a stay-at-home mom she felt limited.

She started doing what she could, though, small acts such as donating clothes to charities, sending packages overseas to soldiers and working on food drives. Then it dawned on her that as an actress and dialect coach she could use her specific gifts and experience to work on something larger.  That was the seed that spurred her to write Sanctuary, her one-woman play about the impact of war on women that will have its New York premiere at Off-Broadway’s Theatre Row Jan. 3 through 23.  Sulby takes on all the characters, dominant of which are housewives, a TV war correspondent modeled after Chrisiane Amanpour and a P.O.W. in Kosovo.

“I recognized that one person’s voice can make a difference either way,” she said.

Wearing black stretch pants, a black T-shirt and running shoes, with her long brown hair pulled into a pony tail and glasses perched atop her head, Sulby, 52, sat on a metal folding chair in a bare rehearsal studio and discussed her journey to this theatre.  Sanctuary first took form a decade ago and received overwhelmingly positive responses when Sulby performed it in workshops and at festivals.  Two years ago she felt called to redraft it and get it back into the world. That redrafting process has continued as she included ISIS and the terrorist attacks in Paris.

“There’s so much going on in the world we needed to add,” she said.

The 80-minute play spans many conflicts — the two world wars, Vietnam, those in the Middle East — and are reported on by the same TV correspondent, Donya Namdar, an anachronistic element that helps highlight the repetitiveness of war and violence. Projections of news footage and period scenes aid the transition. The housewives who watch are nameless, reflecting their archetypal nature.

“We’ve got to stop it before it begins,” Sulby says.  “The rhetoric going on in our country now is almost the same.  It’s the luck of the draw that I was born here where I can have high quality problems.  My hope is that people will come to see the play and be inspired themselves. What it’s about is individual evolution that ends up being social evolution.  We need to not just give money but to say collectively that we’ve got to find a way to stop this.  A tiny shift in thinking can make a massive difference.”

Sulby chose the title for its literal and figurative meanings.  Sanctuaries are found in houses of worship and also in ourselves.

“Sanctuary to me means peace inside yourself.”

Besides the news footage, Sulby has incorporated work from the 13th century Persian poet Rumi, poems from World War I, excerpts from soldiers’ journals and emails from the soldiers in Iraq to whom she sent packages.

“It’s exactly what’s happening now,” she says.  “We pretend this is some new thing but it’s been since the beginning of time.  We need to become a vocal majority in the world instead of a silent majority.”

This idea is highlighted by commentary throughout the play the by Valkyries, female figures from Norse mythology who chose who would live and die in battle. As one says, “And the ritual would continue until that decision maker would want to stop. Until he could stop because the reason for killing didn’t matter any more – he would have to stop because he was spent. Then he would know that it’s one thing to give the order to go to battle and it is another thing entirely to kill someone.”

Sulby mentions Steven Pinker’s Better Angels of Our Nature as having a strong influence in her thinking.  Pinker makes the case that humanity is actually at its most peaceful time in world history.

“The truth is we are actually evolving,” she says.  “If we can catch onto that optimism we will be fuel for the nation.”
Posted by Retta Blaney at 12:28 PM No comments: 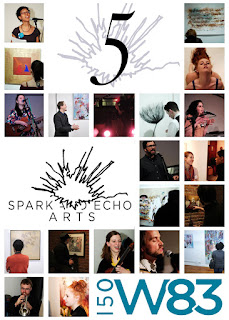 Spark and Echo Arts, an arts non-profit dedicated to illuminating the entire Bible through the arts, will commemorate its fifth anniversary with a celebration of visual and performing arts at W83, a community center owned and operated by Redeemer Presbyterian Church of New York City. The celebration includes an exhibition entitled “The Word Illuminated” running from Jan. 14 through Feb. 5 and an evening of live performances on Thursday, Jan. 28. Visual art, music, poetry, dance, theatre, and film from the project’s five-year history will be honored in a beautiful setting.

The exhibition, open daily from 8AM to 9PM, is curated by Blake Ruehrwein and features outstanding 2D and 3D works created for the project. Included will be meditations from award-winning pastelist Nicora Gangi, photography from Artist-in-Residence Melissa Beck, animated video art by Jessie Brugger, conceptual map-art by Emmitt Klein-Stropnicky, text-based visual art from Janna Luttrell, and more.

The evening of performances on January 28th will include live music from jazz composer Benje Danemen and songwriter Mara Measor, spoken word by Ren Jackson and Emily Ruth Hazel, film by Zhubin Pahrang and Chris Knight, dance, theatre, guest speakers, and more. Handmade food by Heather Isiminger will also be available. Curators, project leaders, and Spark and Echo artists past, present, and future will be among the audience.

Spark and Echo Arts is committed to engaging artists from diverse backgrounds by challenging them to respond to Scripture using their talents. To date the non-profit has commissioned 176 artists, who have responded to 2,650 verses in the Bible. Artists are encouraged to respond honestly to each passage, in their voice. Their works are presented so the artists’ talents and the Bible’s continued relevance shines through. See, hear, and experience the fruits of this project, five years in the making, by visiting the gallery and performance.


W83 is a five-story multi-function community and cultural center, located in the Upper West Side, NYC, owned and operated by Redeemer Presbyterian Church. W83 aims to serve as a meeting place of accessibility and affordability for our neighbors in the Upper West Side and beyond, providing space for the cultivation of community and cultural activities.
Posted by Retta Blaney at 12:01 PM No comments: