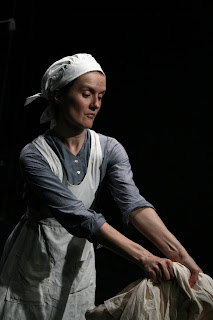 More than a decade ago, the lyrics of a Joni Mitchell song called “Magdalen Laundries” struck a cord with Erin Layton.

These bloodless brides of Jesus/If they had just once glimpsed their groom/Then they’d know, and they’d drop the stones/concealed behind their rosaries.

Wondering what a Magdalen Laundry was, Layton did some research and found out about the Catholic convents in Ireland where unwed mothers, orphans, disabled girls, prostitutes and even merely high-spirited young women were sent to live and work in servitude to, as it was thought, atone for their sins. The commercial laundries operated from 1830 until 1996.

Layton was shocked by what she read, both by the treatment of the women from the nuns and that she had never heard of the laundries. The images stayed with her as she pursued her acting career. Then, in 2010, as Layton was hoping to develop a one-woman project, she thought of the dramatic possibilities of portraying the lives of those women. She booked a trip to Dublin, her first to the land of her father’s forbearers, to visit what was left of the laundries and try to find people with memories of those days.

Now, five years after that visit, she will be heading back across the Atlantic. This time she will be the one educating people about this black mark in Irish Catholic history with her one-woman play, Magdalen, at the Edinburgh Festival Fringe in Scotland, the world’s largest arts festival. In August, she will join more than 3,300 performers, presenting her show 27 times.

“My hope is to be a voice,” she said. “I want to put it on to the best of my ability and get people to wake up and listen.”

Layton, 37, talked about her journey from hearing a Joni Mitchell song — she jokingly calls Mitchell her co-writer — to preparing for the famous arts festival while sitting in the second floor lobby of 59E59 Theaters. She had been chosen as one of 19 performers to be part of this year’s East to Edinburgh series. Hosted each year by the Off-Broadway theatre as a way to help shows get on their feet before flying off to Scotland, East to Edinburgh simulates the same production constraints that all shows experience during the Edinburgh Festival Fringe, while giving them a nurturing space to fine-tune their productions. New Yorkers also get the opportunity to see some of the most adventurous theater from around the city and across the United States.

“As an actress, the voice of the outcast has always been of interest to me,” Layton said. “I’m interested in people who don’t have anything. We can learn from them.”

An estimated 30,000 women were confined in these institutions in Ireland over the years. In 1993, a mass grave containing 155 corpses was uncovered in the convent grounds of one of the laundries. A decade later, following an 18-month inquiry that found significant state collusion in admitting women to the institutions, a formal state apology was issued, with a plan to compensate survivors. The Catholic church has not contributed to this fund nor apologized.

For her play, which runs “a fast 60 minutes,” Layton drew from Frances Finnegan’s Do Penance or Perish: Magdalen Asylums in Ireland to help her create the 10 characters. She collaborated with director Julie Kline to develop a script. She also worked with Justice for the Magdalens, which has an office in Philadelphia, to get a listing of the sites in Ireland and listened to recordings of different Irish dialects so she could differentiate her characters as being from various parts of the country.

The play is set in a Magdalen laundry in North Dublin, transitioning in time between 1948 and 1998. It has been published by Indie Theater Now in its Best of Fringe 2012 (from the New York Fringe where her play premiered that year) and its Plays by Women collection.

Layton, who grew up Catholic and is now a Presbyterian, estimates she has performed the show nearly 40 times in the last three years.  She says audience response has been overwhelmingly positive.

“People are stunned, shocked. A lot of people had no sense this had happened,” she said.

“The play could be about any oppression of women. We see it all the time. This is a universal issue, women incarcerated for being weak. The material sells itself.”