Celebrating Ella Fitzgerald in 'Me & Ella' 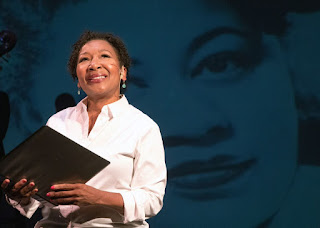 Andrea Frierson is an enthusiastic performer with a golden voice.  What she needs now for her one-woman play, Me & Ella, which opened last night as part of the York Theatre Company’s New2NY Series, is some heavy-duty editing and rewriting.

With a love for Ella Fitzgerald that began when she was a child and first saw the great singer on TV, Frierson tells Fitzgerald’’s story paralleled with her own.

“I was too young to understand what the words were saying, but I felt them,” she says.

The idea is good but the execution is not.  Although only 80 minutes, the show began to drag for me two-thirds of the way through. I always loved Frierson’s singing, but her personal story was filled with too many details about the lives of her parents, both of whom struggled for singing careers, making it seem she was presenting two separate plays at she same time.  The show is co-directed by the Tony Award-winning team of Murphy Cross and Paul Kreppel.

Frierson, who has appeared in several Broadway productions including The Lion King and Once on This Island, has the range to interpret Fitzgerald well. Her “How High the Moon” is jazzy, her “A Tisket and Tasket” is playful, “I’ve Got It Bad” is soulful, “I’m Old Fashioned” is romantic and her “Lady Be Good” is swinging.  She even looks a bit like Fitzgerald, only shorter.

It’s clear Frierson has a passion for her project and I hope she can develop it further. That is the purpose of York’s New2NY Series, which focuses on new musicals, giving them a place to grow between developmental lab and full production.  In Transit, which opened last season on Broadway, was part of an earlier Series.  Me & Ella was featured last season as part of the York's Developmental Reading Series and commemorates the centennial of the legendary First Lady of Song.

The informality of the Series allows performers and creative teams to concentrate on the show without the trappings of a full production.  Frierson was on-book and dressed casually in black slacks, a large white shirt and black flats.

One thing I hope Frierson will retain as she moves forward is her outstanding band —  Richie Goods on bass, Rex Benincasa on percussion and on piano, Ron Abel, who also is the music director/arranger.

I was fortunate to hear Ella Fitzgerald in concert with the Baltimore Symphony Orchestra in the mid-1980s on a pier at the city's Inner Harbor.  She was fabulous, and graciously continued singing after the Orchestra, governed by union rules on time, had stopped playing. They sat in their places and she sang on.  It was a wonderful evening that I have never forgotten.

Me & Ella will play through July 23 at The York Theatre Company at Saint Peter's (619 Lexington Ave., entrance on East 54th Street).
Posted by Retta Blaney at 1:42 PM No comments: