I wrote this feature for the Feb. 3, 2013 issue of The Living Church magazine.

The church has been slow to account for the abuse of indigenous children in Canada’s church-run residential schools because words for such atrocities don’t exist, says the Rt. Rev. Mark MacDonald. But he has hope that the injustices will finally be addressed.

"The primary obstacle to Canada and the church’s understanding of what happened is that we do not have a language that describes such horrific evil,” said the Anglican Church of Canada’s first National Indigenous Bishop. “The schools became magnets for pedophiles. A huge percentage of the children were sexually abused, physically abused.”

With his long graying hair in a pony tail and wearing colorful beads over his clerical garb, Bishop MacDonald delivered the opening keynote address to 40 participants at Practical Peacebuilding, a new joint program of Candler School of Theology and The General Theological Seminary (GTS). He spoke at a dinner held Jan. 10 in GTS’s majestic dining hall.

From 1870 to 1996, 130 different residential school, most run by churches, including the Anglican, were crafted on military models, he said. Indigenous children were taken from their families at about 5 years old and returned when they were 16 or 17.

“The purpose was to destroy the family bond, the connection to culture and language and to make it impossible for indigenous life to continue into the future,” he said. “It was for indigenous people to die out.”

The death rate from TB and other diseases at some schools was 30 to 50 percent death, he said.

“The prominent feature was the graveyard. Now in Canada they’re spending thousands of dollars to find out how they died.”

Those who made it through the schools call themselves “survivors,” he said.

“The Christian church said its strategy is to make you disappear. Nobody tried to hide that.”

Altogether 150,000 indigenous children went through the schools; 80,000 are still living, the Bishop said. The church’s reaction is “a case study in when evil so swamps and floods a group of people they will deny it,” he said. “The church doesn't have the capacity to describe or accept within itself what happened. There’s a tremendous amount of denial.”

Scripture, with words like powers and principalities, is better able than psychology to describe such “systemic evil,” he said.

“We are so wedded to our delusion of individual autonomy that when evil swamps our personal commitment, our piety, we don’t have adequate ways to describe it. Even people of kindness can become complicit in the worst type of evil.”

The first thing we as Christians must find is a way to speak about systemic evil, he said, because it still exists in issues of racism and sexism.

“We have to find a way to speak of a future that’s more than just a Christian future. Our task is to find a language that will translate our concerns to a broader public, the language of the land, ecology, and our relationship with land. There’s an ongoing dispossession of the land. It’s no longer the Calvary and John Wayne. It’s the oil companies and mining companies with a precision and effectiveness John Wayne could only wish he had.

“When you can find the language you can create forward movement.”

Canada’s Truth and Reconciliation Commission is trying to make all citizens understand the poverty, suicide rate and multilayered trauma in the country’s indigenous communities, he said, “to get them to understand it through the eyes of a child.” He estimated about 25 Truth and Reconciliation Commissions have formed worldwide, but says Canada’s is the first exclusively about children and the first exclusively about indigenous people.

“I’m living in a lot of hope now. God is working among us. We have to develop the capacity to see what God is doing. People are beginning to listen, and listen big time.”

“I’ve seen more change in the past year or two than in my whole life.”

The church moves slowly, he said, mentioning that the first time Canada’s Anglican church discussed having an indigenous bishop was in 1854. His appointment in 2007 is significant he said, because a bishop is the symbol of his or her people.

“It took awhile, 150 years actually, but it happened,” he said. “I entered this job as a kind of midwife for a self-determining indigenous Anglican church.”

Lindy Bunch, a seminar participant who came from Weslyan Seminary in Washington, D.C., said she had known a bit about the abuse of indigenous children before hearing the Bishop’s talk.

“Being a white American Christian woman it’s really powerful to hear these stories of how our nation was built,” she said. “We really need to struggle with that.”

Georgette Ledgister, a Candler graduate who came from Atlanta for the program, found it insightful on a personal level, being originally from the Democratic Republic of Congo. She said the church needs to learn lessons from the indigenous experiences in Canada to not act in a colonial manner and take over authentic traditions.

“That hit most closely to home,” she said.
Posted by Retta Blaney at 5:39 PM 1 comment:

Scarlett Johansson stars in "Cat on a Hot Tin Roof" 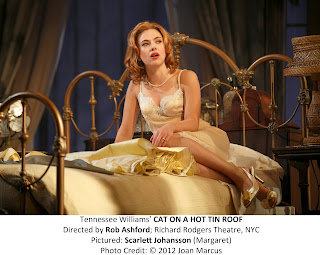 I’m sure one of the first things you’ll want to know about the latest Broadway revival of Cat on a Hot Tin Roof is, How is Scarlett Johansson as Maggie? Quite good, thank you for asking. The sexy part comes naturally to her, of course, but she also conveys the edgy nerves of this tightly wound southern beauty. Her Maggie is ready to burst with sexual frustration over a husband who won’t sleep with her and her fear of returning to the near poverty of her youth.

I’ve seen quite a few Maggies by which to compare Johansson’s. Tennessee Williams’s classic, which won the Pulitzer Prize for drama in 1955, has been revived on Broadway three times in the last decade alone. And I was fortunate to see the 1974 production with Elizabeth Ashley, the revival that many people still speak of with awe, and rightly so.

Rob Ashford directs this latest offering, which is at the Richard Rodgers Theatre for a 15-week engagement. The cast includes Benjamin Walker as Maggie’s alcoholic husband, Brick, and an excellent Ciaran Hinds as her father-in-law, Big Daddy Pollitt, a crude, obese man who through his own hard work and wits has become the richest cotton planter in the Mississippi Delta.

The first of the three acts belongs to Maggie, and Johansson, in only her second appearance on Broadway, convincingly carries off her character’s nonstop wrought and frequently humorous commentary on her bratty nieces and nephews, whom she calls the “no-neck monsters,” her husband’s shunning of her and their resulting childlessness and her fear that Big Daddy will leave his estate to Brick’s older brother, Gooper.

Although I wasn’t impressed with Johansson’s Tony-winning turn in A View from the Bridge in 2010, I found her Maggie to be far superior to the other two recent portrayals, those by Anika Noni Rose in the 2008 all African-American cast production and Ashley Judd in 2003.

Walker is not quite as strong, but his Brick is fine. If ever a young actor had pressure on him it would be Walker -- stepping into a classic role, playing opposite a Hollywood star who won a Tony her first time on Broadway, and knowing his mother-in-law, who just happens to be Meryl Streep, would be in the audience at some point. But he handles the part well, the drunken indifference as well as the passionate fights with Maggie over his love for his former classmate and football teammate Skipper and with Big Daddy over his drinking.

Debra Monk captures Big Mama’s strength and well as her flightiness. Emily Bergl as Maggie’s fertile (five no-neck monsters and one on the way) sister-in-law, Mae, and Michael Park as Gooper are fun as they bow and scrape to Big Daddy in their attempts to take over his estate, 28,000 acres of the finest land in the south, as Big Daddy likes to boast.

All have gathered at the Pollitt plantation to celebrate Big Daddy’s 65th birthday. But the lies -- the “mendacity” -- can only stay buried so long. Williams poignantly reveals them one by one.

As always, Maggie and Brick’s bed is the dominant feature of the set, which this time has been designed effectively by Christopher Oram. (As Big Mama says, when a marriage goes on the rocks, that’s where it starts.) Neil Austin’s lighting provides a brooding gothic quality in keeping with the play’s theme of things being darker than they appear on the surface. Julie Weiss designed the costumes, including that slip Maggie is famous for parading around in throughout Act One after one of the no-neck monsters ruins her dress by hurling a buttered roll at her.

I don’t think I could ever grow tired of a well-done Cat on a Hot Tin Roof. If three revivals in 10 years is excessive, at least in this case the third time is the charm.
Posted by Retta Blaney at 4:38 PM No comments: 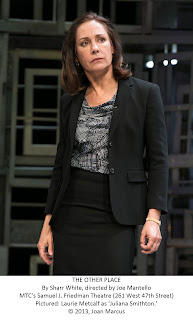 Laurie Metcalf’s portrayal of a deeply troubled middle-aged woman in Sharr White’s play The Other Place is so real it’s painful at times to watch. As her character, Juliana, careens between illusion and reality, Metcalf builds suspense that left me curious to learn the truth in this tight 70-minute drama at the Samuel J. Friedman Theatre.

The three supporting characters are strong as well -- Daniel Stern as her husband, Ian; Zoe Perry, who plays several roles, including that of her estranged daughter (they are mother and daughter in real life); and John Schiappa, as a former colleague. We learn the truth behind the mother/daughter alienation and Juliana’s illusions in the heartbreaking final scene.

As for the play itself, which is directed by Joe Mantello, I liked it better the next day when I thought about it. Juliana’s hysteria -- aimed at her husband whom she suspects of having affairs and about the brain tumor she thinks she has -- wore on me after awhile. But for the most part it held my interest as I tried to work out Juliana’s truth.

Initially we see her as a medical researcher turned pharmaceutical promoter giving a lecture to a group of doctors. Our first indication that all is not as it seems comes when she begins obsessing about a young woman in a yellow bikini seated in the audience, a figure no one else seems to see. Scenes fade from one to another as we begin to question Juliana’s sanity.

The way she sees it, she is divorcing her husband over infidelity, and their daughter, who ran away as a teenager, is now a young mother married to her former colleague and back in touch by telephone. Ian tries to point out other realities, that they are not divorcing and that their daughter got into a car with a stranger a decade ago and is now likely dead.

The play’s title refers to a house on Cape Cod the family used to own. It is here the truth is revealed, and Metcalf has built her performance to perfectly unveil the climax. You may not be surprised, but you will surely be affected.
Posted by Retta Blaney at 5:42 PM No comments:

This being human is a guest house.
Every morning a new arrival.

A joy, a depression, a meanness,
some momentary awareness comes
as an unexpected visitor.

Welcome and entertain them all!
Even if they’re a crowd of sorrow,
who violently sweep your house
empty of its furniture,
still, treat each guest honorably.
He may be clearing you out for some new delight.

The dark thought, the shame, the malice,
meet them at the door laughing,
and invite them in.

Be grateful for whoever comes,
because each has been sent
as a guide from beyond.