Cat on a Hot Tin Roof revival will leave you asking Why? 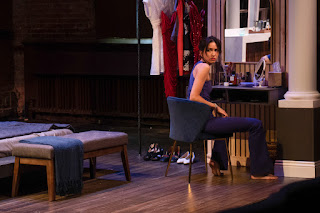 No director’s note is included in the Playbill for the Ruth Stage revival of Cat on a Hot Tin Roof, which opened last night at Theatre at St. Clement’s.  This is unfortunate because I would love to know Joe Rosario’s thinking behind his choices.  I sat there wondering over and over, Why?

My biggest and most significant question is why he set this play about the Deep South in the 1950s in the present.  The heart of the play is about Brick’s anguish over his homosexuality and his love for his high school friend, Skipper, which drives him to drink and away from his wife, Maggie.  This is 2022.  Brick and Skipper could be married and living happily ever after.  They could even have their union blessed in many religious traditions.  No guilt.  No alcoholism.  No Maggie.  No story and no moving Tennessee Williams play.

Another major question is why was Sonoya Mizuno cast as Maggie.  She’s skinny and flat-chested and has zero sex appeal.  We checked the program after the first act and read that she was a ballet dancer before “making the transition to acting.”  That explains the body, which is a beautiful dancer’s body.  It also says this is her New York City stage acting debut.  That could account for her unrecognizable Maggie, with a southern accent that left Williams’ witty and highly charged dialogue incomprehensible a great deal of the time.  No dialect coach is mentioned in the program.  That would have been money well spent for all of the actors.  (Maybe there actually was one who is uncredited in the bios.  The playwright is also not listed in the bios.  Did they forget about him?  He did, after all, win a Pulitzer Prize for the play in 1955.)

Another question is why present the show with such a low rent appearance.  Brick (Matt de Rogatis) has tattoos all over his arms and onto his chest.  With her big blond hair, grosely over made-up face and gaudy jewelry, Big Mama (Alison Fraser) looks like Ivana Trump resurrected.  Matthew Imhoff’s set could be depicting a trailer park or cheap motel room.  And Xandra Smith’s costumes look straight out of Target.  Instead of slinking around in a classic white slip like the one made famous by Elizabeth Taylor in the 1958 movie version of Cat, Mizuno gallops about in an ugly gray glorified teddy.  I was fortunate to see Elizabeth Ashley as Maggie in the 1974 Broadway revival.  What a contrast. She filled that white slip beautifully too.

The Pollitts are supposed to be wealthy.  Big Daddy (Christian Jules Le Blanc) is a crude, self-made man but the rest of his family, with the exception of Brick, are climbers.  They might be tacky underneath but they should be displaying their wealth on their Mississippi estate.

I wonder what Williams would think of this interpretation of the play that was his favorite.  Or his distant cousin the Rev. Sidney Lanier who, as the rector of St. Clement’s Episcopal Church, gutted the sanctuary in 1963 and build an Off-Broadway theatre.  The parish and theatre continue to share the building on West 46th Street.  I don’t think either would be pleased.

Posted by Retta Blaney at 1:44 PM No comments: 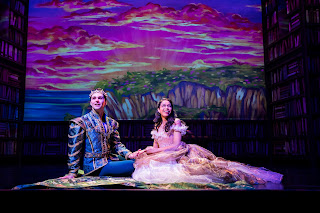 An unhappy 17-year-old girl finds refuge in reading until one book, a fairytale, changes her life in Between the Lines, the new children’s musical that opened last night at the Tony Kiser Theater.  The two stories collide in the magical way children love but the charm didn’t extend to this adult, or my guest who left at intermission.

We were in the minority in this regard at Friday’s preview performance.  Few children were there, probably because with an 8 p.m. curtain for a show that runs two hours and 20 minutes, with a long intermission, it would be a late night out for little ones.  The theatre was filled with adults who loved the show from beginning to end, laughing and voicing their enthusiasm throughout, so much so that I wondered if the audience had been packed with family and friends of the cast.  Just as likely, though, they were fans of Jodi Picoult, the best-selling chick-lit author whose book Between the Lines, written with her daughter, Samatha Van Leer, inspired the musical.

That appreciative crowd didn’t seem to mind that every character in the real-life plot was stereotypical, something that is just fine with children because they love familiarity.  And they obviously didn’t find the fairytale plot overdone and tedious, as I did.

Jeff Calhoun directs the cast of 10.  Elyssa Samsel and Kate Anderson wrote the music and lyrics for the 20 songs and Timothy Allen McDonald wrote the book.

Arielle Jacobs is winning in the lead role of Delilah, who has moved with her mother (Julia Murney) to, as the program says, "the kind of town 17 year olds dream of escaping.”  Her world was upended after her father left her mother for a young yoga teacher.  Now her mother cleans the houses of her classmates and goes to school at night, leaving Delilah to fend for herself.  Her days are rough too.  Having transferred into a new school as a junior, she is bullied by the mean girl, Allie (understudy Aubrey Matalon performing for Hillary Fisher) and her friends.  To escape her loneliness Delilah crawls out onto her roof at night to read.

“Between the lines, there’s a place I feel free,” she sings.  “That’s where I want to go.”

One night, having already read Dostoevsky, comic books and The Great Gatsby, which she dismisses as “a telenovela for the 1 percent,” Delilah opens a picture book she brought home from the school library and is smitten by the handsome Prince Oliver (Jake David Smith).  He soon speaks to her from the page and they develop a relationship.  Before long, he steps into her world and, eventually, she falls into his.

This is the kind of plot young children like but for me, other than Delilah the only interesting character is Jules (Wren Rivera), the nonbinary student who befriends her.  They always have a sharp comment.  “If Allie was on fire and I had a glass of water, I’d drink it,” they say.  And, “Acting like a dick won’t make yours any bigger.”  Unfortunately their role is minimal.  (Gender and sexuality consultant, Celeste Lecesne).

Having a nonbinary character was one of the few elements that made this show seem even remotely contemporary.  Picoult’s and Van Leer’s hardcover book was published a decade ago, but much of the play’s dialogue sounds like 1990s Oprah show commentary.  When Delilah is told to “live the story you want if it’s not the story you’re in,” the audience let out the sound of a collective Wow, as if hearing a profound pronouncement.

Tobin Ost’s set serves the story well.  Packed bookcases on either side disappear into the heights beyond view and smaller shelves frame a wall where the storybook projections appear.  (Projection designer, Caite Hevner).  A small portion of the floor lifts on a slant to create Delilah’s rooftop getaway and minimal bedroom, living room and school furniture slide on as needed.

Paul McGill’s choreography is unimaginative, although the tap dancing dog (Will Burton) is cute.

Between the Lines had its world premiere at Kansas City Rep where it broke box office records in the fall of 2017.   A sold-out concert version was performed at 92Y in Manhattan in January 2018.

A word of warning for all of you who plan to see this show, wear long pants and take a jacket.  The theatre was freezing Friday night.  I thought of the few little girls I saw earlier going into the theatre in their spaghetti strap dresses, their legs bare, and I wondered how many were taken home at intermission.  Their parents should have asked for a refund.  It could almost have been considered a form of child abuse to make them stay there all that time.

Posted by Retta Blaney at 9:29 AM No comments: