Not a ghost of a chance 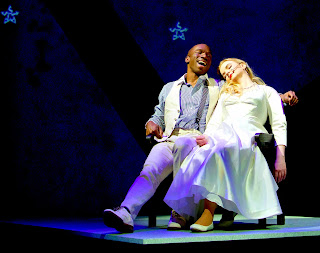 Oscar Hammerstein II was one of the geniuses behind the creation of American musical theatre.  Besides such wonderful songs as "Oh, What a Beautiful Mornin'," "Some Enchanted Evening," "My Favorite Things" and "You'll Never Walk Alone," he left behind commentary on the inspiration for some of our greatest musicals from the Golden Age of Broadway.  So why in the world would anyone who wanted to develop a theatrical work about the man and his music decide to use a 3D hologram to represent him instead of a dynamic actor?

That's what you get in Sincerely, Oscar at the Acorn Theatre on Theatre Row.  Doreen Taylor wrote the book for the 90-minute show and was the one who envisioned turning Hammerstein into what looks like a creepy ghost onstage.  Even the nearly 30 songs performed by Taylor and Azudi Onyejekwe can't save this ill-conceived work.

The hologram -- I refuse to call him Hammerstein -- has a voice recorded by Bob Meenan.  What should have been interesting storytelling is lost in the just plain weird concept of this artificial creature sitting at a desk with a recorded voice telling his tale.

Director Dugg McDonough didn't seem to know what to with all of this.  He is not helped by Jason Simms unimaginative set, which is just several platforms that the singers climb as they sing.  The performers look really uncomfortable trying to bring some life into this bland setting.

The color in the production comes from the cartoonish projections by Brittany Merenda that accompany the songs.  These feature words like Fringe for that famous song or hearts and lips for "Make Believe."  They look ridiculous.

Taylor's "inspiration" for this show followed a benefit concert she was involved with several years ago for the Oscar Hammerstein Museum & Theater Education Center.  After working with all those beautiful songs, she thought it would be great to put the writer himself onstage to talk about them.  Nice idea.  She couldn't have the man himself, of course, but why did she think a hologram of him would be entertaining theatre?

Adding to the feeling that we were in a theatrical disaster was the fact that the microphones kept malfunctioning, even though the show opened earlier this month following previews.  About an hour into the performance they stopped working yet again and the entire stage went dark.  No one appeared and no announcement was made about what to expect.  It was at that point I turned to my friend to see how she was doing.  She had a headache going into the show and was in misery by that point.  We opted to sneak out, as did others.  The theatre had many, many empty seat even before the show began.  Word of mouth, probably, and, I'm sure, horrible reviews.  (I don't read reviews before I writer mine but I can't imagine they would be favorable.)

A press release proclaimed that this show was introducing the first use of holographic technology Off-Broadway.  It might have worked for an imaginary character, but for a flesh and blood master like Oscar Hammerstein, it is a sorry portrayal of a man who deserves so much better.
Posted by Retta Blaney at 6:07 AM No comments:

'Oklahoma!,' or so the program says 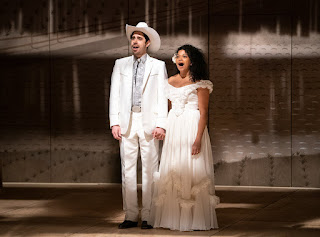 For days before I saw the current Broadway revival of Rodgers and Hammerstein's Oklahoma!, I was singing "Oh, What a Beautiful Mornin'" in my head.  I certainly wasn't singing when I left the theatre, though.  I had been too bored for three hours by director Daniel Fish's greatly re-imagined staging and disgusted by the violent, blood-splattered ending.

This unusual production was a hit during its run Off-Broadway at St. Ann's Warehouse last fall, prompting the move to the Great White Way.  The appeal escapes me.

I could accept the country-western interpretations of the songs, even though I prefer the lyricism of the traditional versions.  I was also OK with forfeiting a lush orchestra for a seven-piece onstage band, even though the songs never achieved their soaring beauty.  Orchestrator and arranger Daniel Kluger's choice certainly makes the show sound more like pre-statehood Oklahoma.

But I didn't like having the house lights on the whole time, except for the precious few moments of drama or romance.  (Lighting by Scott Zielinski).   This was probably considered a way to make the audience feel a part of the community, but it was distracting to me.

Except for Ali Stroker as Ado Annie, I found the actors lacking.  Their performances were lifeless and their singing voices downright irritating at times.

Rebecca Naomi Jones as Laurey was the greatest miscasting. She had none of the girlishness this character should have.  She is way beyond girlhood days.  She's a fully developed woman who looks as if she's seen her fair share of rodeos.  This is problematic because the plot, such as it is, involves the courtship of a young girl who doesn't want to admit she is smitten with Curly (Damon Daunno), the cowboy who is wooing her.

This could be why their courtship lacks any spark.  The only spark seemed to occur between Curly and Jud Fry (Patrick Vaill) in what is always the show's darkest moment.  (In this production, the ending is even darker.)  Curly, threatened by Jud's pursuit of Laurey, suggests he should hang himself so he could achieve in death what he hasn't in life, sympathy and approval from the locals who look down on him.

I never liked that scene before, but I found Fish's staging to be intriguing.  The house goes dark and a black and white projection of Jud's face fills the back wall and we witness his facial expression as he considers Curly's horrible suggestion.  It's quite effective until Curly's face appears and shares the screen.  While his words are hateful, the scene feels intimate and it almost seems as if the two men are going to kiss.  Strange.

Another change is Laurey's dream sequence, which is usually a ballet.  In this production, with choreography by John Heginbotham, a young bald woman, Gabrielle Hamilton, wearing only a thigh-length white sequined T-shirt with the words DREAM BABY DREAM in black letters, performs an explosive modern dance, accompanied by a recording of electric guitars playing "Oh, What a Beautiful Mornin'" and then other songs from the score in more toned down versions.  I liked this change.

Set designer Laura Jellinek has turned the Circle in the Square into a small town meeting place, with light wood planks and shotguns on the walls and wood planks on the stage floor.  Green, purple, red, pink and yellow streamers hang from the ceiling and long tables hold ears of corn and red pots for the cooking.  In an especially nice gesture, the audience is invited onstage at intermission for chili and cornbread.  That’s the one part of the show I can definitely give a rave.
Posted by Retta Blaney at 1:39 PM No comments:

I was blessed last month with the gift of another CD from Gloriae Dei Cantores, the Massachusetts-based choir that has been restoring my soul since I discovered their recordings nearly two decades ago.  “Josef Gabriel Rheinberger: Motets, Masses and Hymns” is having the same effect.

The music this choir sings is sacred, as is the way they sing it.  I feel them praying in song.  While I listen to their recordings often, they are my absolute go-to staples when I am troubled or tired.  I feel transported from my apartment or rental car into a monastery or cathedral, and I absorb the music down to my cellular level.  It heals me in the way my twice daily centering prayer does.

The 40-member Gloriae Dei Cantores, under the direction of Elizabeth C. Patterson, gifts us in this recording with a repertoire that is largely unavailable elsewhere of music from the 19th century German composer and teacher.  Rheinberger wrote works reminiscent of those of Brahms and Schumann, but with a unique lyricism.  The recording includes his eight-part a cappella “Mass in E-flat Major,” “Mass in F for Male Choir” and “Mass in G Minor for Female Choir,” as well as three of his motets.

I was fortunate to hear this choir live when they toured New York many years ago.  I hope they come back soon.  In the meantime, their CDs will lift me when I’m down and remind me that the world is filled with beauty and mystery and, most of all, God.
Posted by Retta Blaney at 2:08 PM No comments: