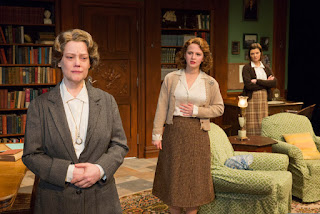 The teachers’ lounge at the Malyn Park Private School looks cozy, with its stuffed armchairs before the fireplace and books filling the shelves that surround the room. But tensions are easily sparked among the women who frequent this refuge in Hazel Ellis’s Women Without Men, which opened last night in its American premiere at New York City Center Stage II.


Beautifully brought to life by the Mint Theater in its ongoing mission to produce the work of forgotten women dramatists, the play, last produced by Ireland’s Gate Theatre in 1938, takes us on a journey into the lives of women who feel trapped in their jobs as teachers with little hope of their situations ever changing.

Under Jenn Thompson’s direction, the pace moves briskly as we get to know each woman and her own personal disappointment at ending up teaching year after year at this girls’ boarding school in 1930s Ireland They have their ways of coping — Miss Marjorie Strong (Mary Bacon, right in photo) has developed a resigned acceptance after 18 years at the school; Miss Ruby Ridgeway (Kate Middleton) keeps going by currying attention and favor from the girls and Miss Connor (Kellie Overbey, left) has spent 20 years doggedly working on a history of “beautiful acts” through the ages that she finally feels is ready for publication. (No first name is given to this most dour member of the faculty.) Among the others are a weary, aged French teacher, Mademoiselle Vernier (Dee Pelletier).

Into the mix comes Miss Jean Wade (Emily Watson, center), an idealistic young teachers (aren’t the new teachers always idealistic and young?). But it isn’t long before the jabs and pettiness of the other teachers dampen her enthusiasm.

“All day, every day, it's bicker, bicker, bicker,” she complains to Marjorie. “Everyone talking maliciously about the others all in turn. There isn't one of them I haven't wanted to murder - except you.”

Marjorie explains her method of coping. “After eighteen years of it, one manages to become detached from one's surroundings.”

She bleakly sums up the reason for the frustration that has turned the women so sour. “Look at us. A small group of women all cooped up together with no release from each other save in the privacy of our bedrooms. Women brought together not by choice, not by liking, but by the necessity of earning our living. No outside interests, no outside friends, nothing to talk about but the pettifogging details of the school and all that therein is. . . dullness, dullness, dullness, and the blighting knowledge that you'll never get any further, that your life will continue for ever in the same old round and the most you can hope for is to save enough to keep you from want in your old age.”

Practicing Marjorie’s detachment proves hardest for Jean in relation to Miss Connor. Almost from the start the two clash. When Jean politely asks Miss Connor about her decades-in-the-making manuscript, she receives yet another putdown: “I’m afraid it will be a bit above your head, Miss Wade. Not, of course that it is difficult to understand, but the sentiments would be so opposed to your own.”

Working on the book and feeling superior to her fellow teachers is what has kept Miss Connor going. “It hardly seems credible,” she says dreamily. “I’ve been working on it all these years, and now my task is nearly completed. People may laugh and sneer at me now. But then they will know - they will hail me as an artist, as one of those who exist to help the sublimity of life, by diffusing the beauty of their very souls. My time is coming - glory and radiance are waiting for me soon.”

Her hope is dashed, though, when her much labored-over manuscript is discovered in shreds. It isn’t long before suspicion widely turns to Jean. As the truth is gradually revealed in the twists and turns of the second act, the characters’ darkest natures are revealed as well.

It’s amazing to me that this engaging play has only been produced once before, and that was 78 years ago in Ireland. Although it was acclaimed at the time, it was never published or revived. We — and Hazel Ellis — have the Mint’s artistic director, Jonathan Bank, to thank for this resurrection. The play’s title caught his eye as he was scanning the catalog of the Dublin Gate Theatre Archives at Northwestern University. After reading the play he knew it needed to be added to the Mint’s list of “extraordinary — but shamefully neglected — female playwrights.”

Ellis’s earlier drama, Portrait in Marble, also had met with great success in 1936, but those two plays were the extent of her playwriting career. She disappeared from the Dublin stage at 30, settling in to the first of her two unhappy marriages. She died of jaundice at the age of 83 in 1986.

But now she has reappeared on West 55th Street in Manhattan. As theatre historian Maya Cantu wrote, “In 2016, Hazel Ellis can be reclaimed not only as a vibrant contributor to Irish theater history and Dublin’s legendary Gate Theatre, but to the expanding repertoire of Irish female playwrights still fighting to be heard in the present.”
Posted by Retta Blaney at 6:56 AM No comments: