'Merrily We Roll Along' Plod along is more like it 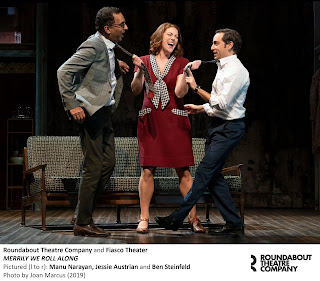 One of the disadvantages of being a critic, sitting in house seats up front in the center of the theatre, is that the actors can see us when we yawn with boredom.  I did that a lot during the revival of Merrily We Roll Along, the Stephen Sondheim/George Furth musical at the Laura Pels Theatre.

After sitting through this Roundabout Theatre Company production, directed by Noah Brody, I can see why the show was troubled from the start.  The original 1981 Broadway production lasted for only 16 performances.

A major obstacle is Furth’s book.  The plot, such as it is, centers around three creative people -- Frank, a composer (Ben Steinfeld), Charley, a lyricist (Manu Narayan) and Mary, a novelist (Jessie Austrian) — and the assorted spouses and others in their lives.  At one time, decades before the start of the play, they were close friends, fired up with the expectancy of their futures.

But that was long ago.  The play begins in 1980 and works its way back to that time in 1957.  It's a pretty dull journey, with cast members who don’t ever really connect with one another.  Considering this is supposed to be a play about relationships, romantic and professional, that is a problem.  Lorin Latarro’s choreography does little to bring them together in a convincingly personal way.  The closest they come is in singing “Old Friends” in Frank’s New York apartment in 1968 but the spark is dim.

The characters themselves never engaged me, and while two of my favorite Sondheim songs are featured -- “Good Thing Going" and “Not a Day Goes By" -- they are sung with so little passion they slip right by.  Passion is missing throughout the show, which also features Brittany Bradford, Paul L. Coffey and Emily Young.  Music direction and orchestration for the eight-piece, off-stage band is provided by Alexander Gemignani.

Even Frank’s desire to get rich, which causes him to abandon his songwriting partnership with Charley for a career as a movie producer, lacks the driving greed it should have.

“Why do you have to be poor to write a good show,” he asks, reasonably enough.

A 75-minute play about unhappy, betraying people isn’t my idea of entertainment.

The only real glimpse we get of those good times is in the final scene, on a rooftop in 1957, when a young Frank, Charley and Mary sing of their enthusiasm about the future in “Our Time.”

Adding to the dreariness is set designer Derek McLane’s odd backdrop.  When I first walked into the theatre and saw it, I thought it was supposed to represent a junk shop.  Then, considering it’s a musical about show business, I figured it is supposed to be either backstage or a movie studio prop department.  The program doesn’t say.  At any rate, it’s an ugly clustering of lamps, books, figurines and clothes.  As a set piece, it has little to do with the action, which takes place mostly in apartments that are represented simply through a few pieces of furniture and props.

This production is a collaboration between Roundabout and its Company-in-Residence, Fiasco Theater, and incorporates additional material from the 1934 George S. Kaufman and Moss Hart play on which the musical is loosely based.


A better approach to staging this as a full musical would have been to do a concert version, which would highlight the show’s strengths — Sondheim’s words and lyrics.  I wouldn’t yawn through that.
Posted by Retta Blaney at 11:38 AM No comments:

'This is my life' 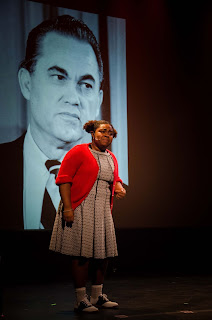 Six young people walk on the stage of The Riverside Theatre in New York singing a gospel song, “Woke Up this Morning (with My Mind Set on Freedom).”  At the end, one girl steps forward to address the audience.  “By the time I was15, I had been in jail nine times,” she says.  It’s an attention-grabbing beginning, but while this is a play, it’s not make-believe.

Turning 15 on the Road to Freedom: My Story of the 1965 Selma Voting Rights March portrays the struggles, courage and final triumph of Lynda Blackmon Lowery, the youngest person to make the complete journey to Montgomery in that historic march.  Lowery’s book by the same name, co-authored by Elspeth Leacock and Susan Buckley, has been adapted for the stage by actor, author and teacher Ally Sheed.

Lynda learned early what being black in the South in the 50s and 60s meant.  The oldest of four, she lost her mother when she was 7 when the white Baptist Hospital refused to give her mother blood following the birth of her last child.

“‘Negro blood’ had to be sent for from Birmingham, 96 miles away by Trailways bus,” she says.

By the time the blood arrived, her mother had died.  “Fifteen minutes too late,” is how her father described it.  “He said that til the day he died.”

By 1965 when Martin Luther King, Jr. was rallying people to organize for the right to vote, Lynda was more than ready to join the effort.  Because black southerns could lose their jobs for just trying to register, organizers recruited children.  These children were then arrested.  With projections of historic black and white photos shown throughout the show, this episode is chillingly depicted as elementary school-aged children are pictured lined up for transport to prison camps.

“We were pretty sure our parents didn’t know where we were,” Lynda says of her experience.  She was taken by yellow school bus to one prison camp for three days and then another for three more before local leaders found out where the children were and returned them to their homes.  Singing “We Shall Overcome” while imprisoned helped them beat down “the fear and the hate and the racism.”

While it had been a frightening experience, Lynda remained committed.  She knew she had a role to play.

“White people could fire black people whenever and however they wanted.  That’s why civil rights leaders needed us children to march.  They couldn’t fire us because we didn’t have jobs.”

As bad as the prison camps were, Lynda and her fellow protestors hadn’t yet encountered the worst abuse.  That would occur on March 7, the day of the group’s first attempt to cross the Edmund Pettus Bridge, a day that became known as Bloody Sunday.

“I told myself I’d be OK because there were so many of us,” she says, but then out came the tear gas, followed by the beatings.

“I’d never really been beaten,” she says, but she was that day, resulting in 28 stitches in the back of her head, with an additional seven over her eye.

Spurred on by Bloody Sunday, an even larger crowd — close to 3,000 people — gathered on March 21 under King’s leadership to march the more than 50 miles to the state capital.  Most had to return to Selma after five or six miles because only 300 were permitted to travel the whole way.  Lynda was one of the 300.

“I was just one day short of my 15th birthday,” she says proudly.

This time they cross the bridge, with no state troopers or people waving Confederate flags and “calling out those ugly words.”

And on the morning of March 25, they entered Montgomery.

“I had really done it,” Lynda said.  “I was there.  I fell down on the ground and just cried and cried and cried.  I couldn’t stop crying until I let it all out.  And then it was gone.”

It’s a powerful story, passionately portrayed.  Besides the projections, the storytelling is enhanced by gospel hymns and songs of the civil rights era performed throughout by the cast, headed by Damaras Obi as Lynda, with Brian Baylor, LaRon Grant, Queade Norah, Chanté Odom, Claxton Rabb, Renée Reid.   The director is Fracaswell Hyman.

The four performances in January at The Riverside Theatre launched Turning 15’s national tour.  It will play in Millersville, PA, and Little Rock in March for Women’s History Month before gearing up over the summer for a more extensive tour this fall.

Riverside Church, on the King holiday weekend celebrating his 90th birthday, was an appropriate place to begin.  The civil rights leader delivered five sermons at the church, which for decades has invited leaders from around the world to speak on social and political issues.  It was there that on April 4, 1967, exactly one year before his assignation, King delivered his “Beyond Vietnam: A Time to Break Silence” sermon.

The Saturday and Sunday matinees at the church’s theatre opened with performances by the 55-member Riverside Inspirational Choir.  After the play on each of those afternoons Pastor Amy Butler held talkbacks with Lowery and others from the civil rights movement.  On Sunday, Jan. 20, they were joined by a member of the congregation, Emily Anderson, who worked for desegregation while in college in Orangeburg, SC, in 1963.

Butler started by asking them to speak about the importance of churches in the civil rights movement.

“The church was a safe place to train, a good place to eat and we knew we were loved and cared for at the church,” Lowery said about Selma’s Brown Chapel where her movement was based.  “The church was like a second home.”

Butler wanted to know if they thought the church was sufficiently “showing up” now.

Anderson said Riverside has consistently stood for justice but “what we need is to really look at how do we engage the community in the struggle.  There’s an intractable persistence of poverty.  How do we attack that?  The church needs to find a way to bring everybody else along.”

Lowery said when she was growing up the church shared the people’s pain.  “I think churches have gotten away from that in a big way.  They don’t talk about the political climate that’s out there now.  I don’t think churches encourage people to speak up.”

What does this story have to say to those who were born later, Butler asked.

“This is my life,” Lowery said.  “This is what I lived.  It’s telling young people you have a voice too.  I didn’t realize it would be this meaningful.  What we did back then was what we were supposed to do.

“I get emotional in parts of the play.  Sometimes I cry from beginning to end.  Fifty-four years later a lot of things still hurt.  We haven’t changed what we need to change for humanity.  We went to jail day after day and it took us three months to get the voting rights act passed.  You can’t start and stop.  You’ve got to be consistent.”
Posted by Retta Blaney at 8:53 AM No comments: