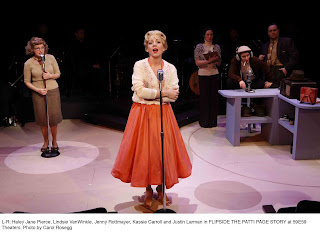 Flipside: The Patti Page Story, which opened last night at 59E59 Theaters, is misnamed. It should be called Patti Page Songs because precious little personal story is told in this show, written and directed by Greg White, that is more a revue of 28 of the songs she made famous.

This latest of what have come to be called jukebox musicals is mostly all jukebox, lacking the drama or comedy that would make it theatrical enough to be called a musical. The most interesting details of Page’s life are recounted in the closing address to the audience, and then they’re mostly just career facts.

We do learn she had adopted two children. So what did this mean in her life? Had she wanted to have children of her own but couldn’t? Was there any heartache about that?

She had two failed marriages. Could we see some of the romance of the courting and drama of the breakups? Neither the husbands nor the children are in The Patti Page Story. How could they be left out of someone’s story?

From what we hear at the end -- that she had 111 hits on the Billboard charts and sold more than 100 million records -- we know she had a wildly successful career, but from what we see onstage her life would seem to be the most placid in show business history. The piece is only 95 minutes long but I was bored well before it was over -- too many novelty songs like “Doggie in the Window” and “Boogie Woogie Santa Claus.”

White uses a familiar devise to unveil what he does of Page’s life -- the older star looking back. Clara Ann Fowler (Haley Jane Pierce, left in photo), a short, bespeckled woman with light brown hair in a drab brown suit and tan sweater, returns to the radio station in Tulsa, OK, where she got her start and begins to reflect on her swift assent to fame as Patti Page (Lindsie VanWinkle). In fabulous full-skirted 50s style dresses and glamorous gowns (costumes by Corey Martin), a platinum-haired VanWinkle sings hits accompanied by an eight-piece onstage orchestra in scenes of Page’s nightclub days as “The Singing Rage.” Pierce sings as well; I particularly liked her “Tennessee Waltz.”

But the flashbacks should be more than just a song. We need conflict and interactions. Page hints at some dissatisfaction with fame, describing a celebrity as not a human being but “the combination of a human -- and the audience that observers her.” But then she goes on to pile one success on top of another.

One of her career highlights has become one of her legacies. On New Year’s Eve 1947, unable to hire back-up singers, Page became the first to “sing a duet with herself” when she recorded “Confess,” singing the main vocals first and then recording the back-up, a trick that was her idea. This earned her lots of publicity and set her apart from the other “Girl Singers.”

“We didn’t know we were doin’ somethin’ innovative,” Clara Ann says, addressing the audience. “Makin’ recordin’ history. We just wanted to record a good song. But that night, there at Mercury studios in Chicago, I was the first singer to ever double her own voice on a recordin’. Overdubbing they called it. Nobody had ever done it before!”

At the end, VanWinkle lets us know her eight-decade career is still humming.

“Today Patti Page is 84 years old,” she says. “She continues to record and perform on a regular basis. Her heart belongs to her audiences who have given her so much love over the years.”

All’s well that ends well, it would seem.

Flipside premiered in Page’s home state of Oklahoma and toured to Washington, D.C. for the Kennedy Center Theater Festival, where it won several awards, including Outstanding Production of a Musical.  Its New York run closes Dec. 30.
Posted by Retta Blaney at 10:06 AM No comments: 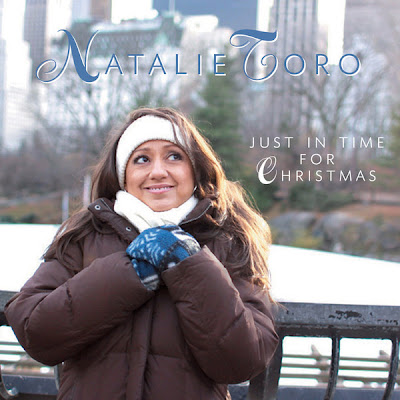 Congratulations to Natalie Toro on the release of her new single, “Just in Time for Christmas.” She brings light, energy and joy to this song made famous by Nancy LaMott on her 1994 Christmas CD.

Toro has been developing her rich voice since she was 5 years old and made her debut at the Apollo Theater. I first encountered her as Madame DeFarge in Broadway’s A Tale of Two Cities several years ago, and most recently this past summer in the New York Theatre Festival’s Zapata! The Musical.  In between I was delighted to have her sing “Where Is It Written?" from her Natalie Toro CD at Broadway Blessing 2011.

Take a listen to her latest and view the video at natalietoro.com.
Posted by Retta Blaney at 11:27 AM No comments:

Don't own your challenges

"Commune with your successes, not your failures. Don't own your challenges. They've only come for a season and one that will add to your growth, so pass through it and keep moving. Don't keep company with your challenges, since anything you dwell on will take over. I don't know any successful people who got where they are without overcoming some serious challenge."
-- Mikki Taylor
Posted by Retta Blaney at 10:33 AM No comments:

Peter Strauss and Michael Learned Star in The Outgoing Tide 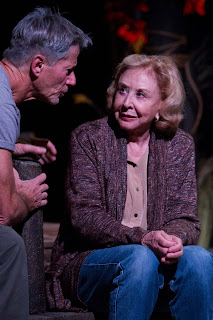 Playwright Bruce Graham creates a moral quandary for his character Peg that sucked me in and left me questioning what I would do after seeing the New York premiere of his powerful play The Outgoing Tide at 59E59 Theaters.

Peg (Michael Learned) is worn out at the start. In retirement she and her husband of 50 years, Gunner (a superb Peter Strauss), have moved from South Philly to their summer cabin on the Chesapeake Bay (nice set by Dirk Durossette). Gunner’s pronounced mental decline has prompted her to consider yet another move -- to an assisted living community, something that in his lucid moments Gunner opposes vehemently, picturing a future lying in bed, wearing diapers and not knowing who or where he is. He has other ideas for his future.

The Delaware Theatre Company's production, under the direction of Bud Martin, also stars Ian Lithgow as their adult son, Jack. We get to know each of them through their current end-of-life trauma and in flashbacks, both enhanced by James Leitner’s lighting.

The subject matter is bleak, especially for someone like me whose mother ended her life in bed, wearing diapers and not knowing who or where she was. Luckily Graham presents the situation with sensitivity and plenty of sharp wit. And sound designer David O'Connor keeps it authentic with his sounds of migrating geese and the tide, at least according to my friend Karen Jensen who lives on the Eastern Shore of Maryland and found much that was familiar in the two-hour drama.

Act One dragged a bit for me, but at the end when we learn what Gunner has in mind, I was eager to learn what would happen. Realizing that his life insurance policy would be worth twice as much if he died by accident, Gunner plans to stage an accidental fall from his boat, after downed a $250 bottle of booze to enhance the believability. He is perfectly at peace with this escape from old-age senility, but the challenge for Peg is that he will not do it without her approval.

The tension mounts in Act Two as we wonder if Peg will give her blessing -- he pleads passionately and makes a strong case -- and if he will go through with it with or without her consent. Both being Irish Catholics, they know the consequences. When Peg points out that suicide is a mortal sin and he will go to hell, Gunner counters that he’ll have plenty of good company with all the pedophile priests.

Graham makes Peg and Gunner and their situation real, so I cared about them and was moved by the conclusion. The Outgoing Tide, which runs through Dec. 16, is well worth seeing.
Posted by Retta Blaney at 12:42 PM No comments: