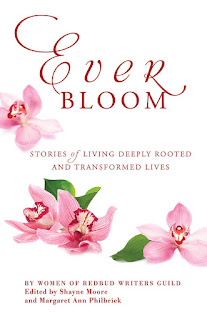 I took Everbloom: Stories of Deeply Rooted and Transformed Lives with me on a women’s retreat last month and it proved to be the perfect companion.  I’ve not finished it because I like savoring the stories one at a time whenever my spirits need a boost or my mind needs to journey.  I don’t want to rush it.

Edited by Shayne Moore and Margaret Ann Philbrick, Everbloom is a collect of women’s voices sharing 40 stories of politics, faith, journeys and growth. The authors are part of the Women of Rosebud Writers Guild, authors, lawyers, pastors and doctors with stories to share. Whether global, such as a trip to Kenya to learn more about the HIV/AIDS epidemic, or intimately personal, the stories remind us that God’s grace can redeem anything in our lives and in this world.

The Rosebud Writers Guild is a group of Christian women who create in community to influence culture and faith, striving to “change the word with words.”  The editors express this well in their dedication: “Dedicated to all women who have yet to find freedom in Christ in order to embrace their story and share it with the world.  We believe in you, and we pray this book will help you ‘walk right up to him and get what he is ready to give. 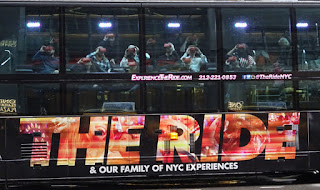 I ran into George Washington Thursday afternoon in front of Federal Hall. At least it was easy to pretend I did during The Downtown Experience, the most creative tour of lower Manhattan I have ever taken. For 90 minutes, through expert storytelling and modern day virtual reality, history came to life as we navigated the streets in a bus specially equipped with theatre seating and floor through ceiling windows.

“Downtown is special because it’s where history and the present come together,” Devin, our tour guide/storyteller, told us. “It’s where innovation met commerce.”

The Downtown Experience nicely combines history and the present, with virtual reality (VR) headsets featuring 360 degree “views” used a half dozen times, just enough to help transport passengers from the present day world they are seeing into the former times they are learning about, starting with Manhattan island’s early days with the Native Americans and their domed huts by the river, thought the coming of the Dutch and English, right up to today.

We experienced the arrival of Irish immigrants on ships as they stand in awe of the Statue of Liberty through VR, then met up with a real-life rapper on the street who sang a tribute to the events of 9/11 while “America” played on the bus’s stereo system.  It was respectful and appropriate before we again put on headsets to journey to the top of the new World Trade Center.

At Wall Street, we traveled back in time with our headsets to get a feeling for that fateful day in 1929 when the stock market crashed and not just lower Manhattan but the entire country felt the effect.  This was especially moving.

I’ve taken several downtown walking tours that covered the same territory and history, but this addition of VR makes the experience more vivid.  Beginning at 200 Water St. overlooking New York Harbor, we traveled the historic blocks of the Seaport and lower Manhattan, the streets where not just New York began but where a free America was launched. It’s a fun brush up on history for Americans and would be a good intro for foreigners. My three visitors from Maryland enjoyed it, and so did I as a longtime New Yorker.  This tour may also be the only way people with trouble walking could cover so much space in comfort.  An elderly woman with a cane was helped on and off the bus by our friendly driver.

The Downtown Experience was conceived, written and directed by Richard Humphrey, CEO and CCO of The Ride, LLC, an interactive tour of midtown that was nominated for a Drama Desk Unique Theatrical Experience Award in 2013.  Humphrey, who has developed original work on and off Broadway, has more than three decades of experience bridging the performing arts, entertainment and business communities. 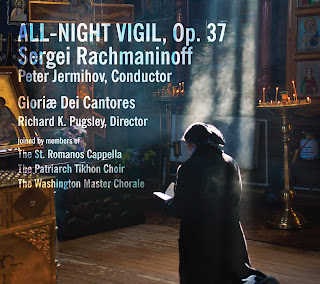 Reverent is a word that comes to mind as I listen to “All-Night Vigil, Op. 37,” the latest recording from my favorite performers of sacred choral music, Gloriae Dei Cantores. Conducted by Peter Jermihov, an internationally recognized specialist in Russian and Orthodox liturgical music, Sergei Rachmaninoff’s deeply spiritual hymns, canticles and ancient chants achieve a level of beauty and mysticism that comforts and restores my soul, as the music of this choir as done for more than a decade.

“All-Night Vigil,” created from two divine services — vespers and matins — was first performed in 1915, two years before the composer fled his beloved Russia in the wake of the revolution. One hundred years later it has been given glorious new life by singers for whom Christian life is a daily practice, and that faith is heard, and felt, in every word.
Jermihov describes in program notes what makes this choir so different. “The key element in the search for authenticity is direct empathy with the word, not merely by accomplished professionals but by believing Christians. The word, imbibed through the mind and heart, leads the singer to find suitable tone and emotional underpinning. This process requires not only full comprehension of but also direct empathy with each word and phrase.”
“All-Night Vigil” is produced by Gloriae Dei Cantores’s director Richard K. Pugsley and was recorded in the Church of the Transfiguration in Orleans, MA.  I have been gifted with many of this Cape Cod-based choir’s recordings over the years and was fortunate to hear them during a New York tour. I have always been touched by this spiritual quality.  For this new recording they have been joined by The St. Romanos Cappella, The Patriarch Tikhon Choir and The Washington Master Chorale.  Seventy-seven singers take part in this collaboration, including soloists Dmitry Ivanchenko and Mariya Berezovska of the National Opera of Ukraine in Kiev.

I like to listen to this recording before bed.  It calms me and makes me feel I am praying the the choirs.  What a blessing.
Posted by Retta Blaney at 10:29 AM No comments: 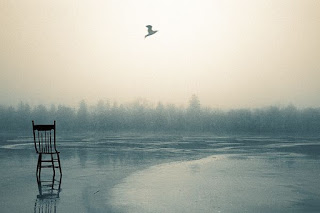 Everyone should be born into this world happy
and loving everything.
But in truth it rarely works that way.
For myself, I have spent my life clamoring toward it.
Halleluiah, anyway I'm not where I started!

And have you too been trudging like that, sometimes
almost forgetting how wondrous the world is
and how miraculously kind some people can be?
And have you too decided that probably nothing important
is ever easy?
Not, say, for the first sixty years.

Halleluiah, I'm sixty now, and even a little more,
and some days I feel I have wings.