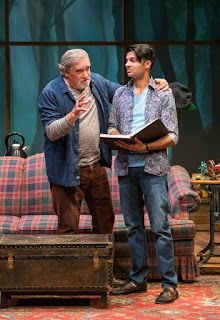 When we left The Stone Witch at the Westside Theatre my friend Dina and I felt we had attended a workshop rather than an Off-Broadway production.  Nothing about it had come together to make a compelling play.

The plot is familiar.  A young aspirant, in this case a children’s book writer but it could also be a singer, actress — fill in the blank — goes to work for aging idol and the two develop a relationship that is either cutthroat or nurturing.

The familiarity of the storyline isn’t the problem.  It’s that the two men, Dan Lauria as the elderly children’s book author and illustrator Simon Grindberg and Rupak Ginn as Peter Chandler, a young man with a manuscript of his own he’d like to get published, have no chemistry together, either positive or negative. It’s as if they are two actors just getting together to work on a show, rather than having been through rehearsals and previews.  Whether this is the fault of their acting, Steve Zuckerman’s directing or Shem Bitterman’s play is hard to pinpoint.  Maybe a combination of all three.

The two characters are brought together by Clair Forlorni (Carolyn McCormick), Simon’s literary agent whom he describes as “a barracuda in Armani.”  Peter had hoped she would publish his children’s book, The Stone Witch, but when he arrives at her office he discovers she is interested in him for another reason.  She wants to hire him to help Simon finish his long overdue — by 12 years — next manuscript.  Peter will receive $10,000 but remain uncredited in the finished work.  Simon had been beloved worldwide for his books, but in his old age has become reclusive and blocked.  He’s also shifts into demented states, leaving him unable to carry on a sensible conversation much less finish a book.

Peter journeys out to Simon’s cabin in the woods, manuscript in hand, to find the person whose work he so admires is a difficult old man.  This is a problem for Peter at first and was a problem for me throughout.  I didn’t like Simon, even when it is revealed that his writer’s block stems from his lack of hope. He seems human briefly, but then returns to being a bore. Actually I didn’t care much for the other two characters either because they also came off as one-dimensional.

The two elements of the production that are fully developed, and quite nicely so, are Yael Pardess’s scenic and projection art designs and Betsy Adams’s lighting.  Simon’s cabin has the standard cozy look, with the addition of large Maurice Sendak-like cartoon animals lining the upper walls.  Through the windows we see a dense forest, giving the feeling of remoteness.  The cabin is transformed into Clair’s office and a bar with little noticeable effort, thanks to the cleverness of the set design and lights.  It’s delightful to watch the woods darken and what seems like skywriting — or children’s book illustrating — drawing a Manhattan skyline in lights out the window of what becomes Clair’s office.

If only that transformative magic could be found in the rest of the show, which was produced in 2016 by the Berkshire Theatre Croup starring Judd Hirsch.
Posted by Retta Blaney at 8:07 AM No comments: 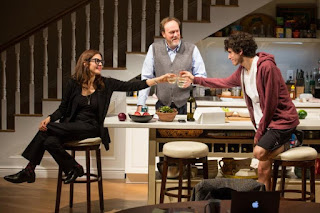 First up, the good thing about this production, the really good thing, is that it stars Jessica Hecht, one of New York’s strongest, most versatile actors.  She is always a standout, even when she’s in a small television role as she was several years ago playing the divorcing wife of a sleazy state’s attorney for one episode of “The Good Wife.”

Now she is holding stage as Sherri Rosen-Mason, the admissions director of an elite New England prep school.  Her drive to diversify the nearly all-white institution is an obsession.  In her 15 years on the job she has increased minority enrollment to 18 percent from six percent.

“If no one fixates on it nothing would change,” she says to Roberta (Ann McDonough), an administrator in the development office who has accused her of seeing race rather than students.

But her liberal world of white privilege is shaken when her 17-year-old son, Charlie (Ben Edelman), her only child, is the one excluded, having been put on the deferred list for Yale while his best friend, Perry, who is biracial, is accepted.  Charlie’s situation pits her maternal drive against her ideals as she has to face the truth that she has turned away plenty of Charlies for Perrys, and question what matters most, racial balance or individuals.

The questions raised are good ones, but I was hindered from fully entering their world by the casting — and overacting — of Edelman.  I never for one moment felt I was looking at a high school senior.  A college senior would have been a stretch.  He looked like a 25-year-old man, which I found out later when I Googled him is more or less the case.  His bio says he graduated from Carnegie Mellon in 2015.

With all the talented teenagers in New York, why did Aukin cast such an age-inappropriate actor?  And then allow him to nearly foam at the mouth with racist anger in the pivotal scene when he learns his fate?  All I saw was an obnoxious, overbearing young man rather than a hurt and angry high school student.

“It looks like we successfully raised a Republican,” he says. But his views change too after Charlie makes an abrupt, extremely liberal decision about his future.

While the questions raised are heavy, Harmon lightens them with lots of humor.  My favorite scenes were those between Sherri and Roberta as they prepared the new school catalogue.  Sherri chastises Roberta for choosing photos featuring only white students, which she feels will hinder her quest to admit even more minorities.

“If they don’t see anyone who looks like them they won’t apply,” she says.

Roberta tries again, this time including a photo of Perry, but Sherri doesn’t think he looks black enough.  Roberta then pours through the course lists and finds an English class with two black girls in it.  She arranges for the photographer and tells the teacher to expect him, only to arrive in the classroom and find that one of the girls is out sick.  She has to make an excuse of why the photo can’t be taken that day.  Sherri finally tells her to stage the photos. Hecht and McDonough play against each other well, with poor Roberta becoming ever more frustrated by her unrelenting boss.

Sally Murphy completes the cast as Ginnie, Perry’s mother and Sherri’s longtime friend who has her own experiences of both sides of the racial question in being married to a black man who is only a teacher at the school while Sherri’s husband, with lesser credentials, is the headmaster.
Posted by Retta Blaney at 4:41 PM No comments: 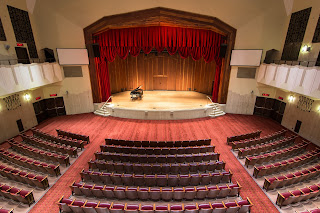 
Long before Manhattan began moving uptown, the theatre district made its home on 14th Street, where performance halls provided magnificent shows, just as they do today in Times Square. A little part of those glory days will be returning now to 14th Street as the beautiful art-deco Centennial Memorial Temple (CMT) opens its doors for rentals.

With a dozen subway stops and the PATH train all within a two-block walk, the 1,347-seat CMT is easily accessed from the Upper East and Upper West Sides, downtown, the outer boroughs and northern New Jersey.

CMT’s technical staff members bring to every event a wealth of experience from their work in all facets of the media and entertainment industries. They have won Grammy Awards, worked on the Oscars, served on crews for top recording artists, like Sting and the Foo Fighters, toured with Broadway shows and staffed production crews at major TV studios. They know how to make your event an unforgettable experience and will handle the details and the pressure so that you can have peace of mind.

Need a more intimate space for fewer people? Railton Hall, located under the auditorium, can host up to 100 guests for any kind of event and Mumford Hall, right below Railton, is the perfect place to host groups of up to 220 for an intimate luncheon, corporate meeting or staff training.

If you are unable to attend the Open House, we would be happy to arrange a private tour for you. CMT is owned by The Salvation Army and was built in 1929 to honor the 100th anniversary of its founder, William Booth. This state-of-the-art performance hall was designated a New York City landmark in 2017.

To join us for the Open House, arrange a tour or find out how CMT and our other spaces can create a landmark event for your organization, please call (212) 337-7339 or visit our website at www.salvationarmyny.org/openhouse

All proceeds from the rental of our spaces are used to support The Salvation Army’s more than 100 programs and services in the Greater New York area, which serve more than a million at-risk adults, children, and families each year.
Posted by Retta Blaney at 8:25 AM No comments: 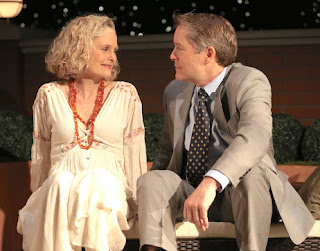 Will love finally bloom for a middle-aged woman and man who met and flirted briefly three decades earlier and now find themselves together again at a party on a terrace overlooking Boston harbor? That is the question that drives A.R. Gurney’s Later Life in the Keen Company’s 25th anniversary production, which opened last night at The Clurman Theatre under the direction of Jonathan Silverstein.

Ruth (Barbara Garrick) has harbored memories all these years of her evening with Austin (Laurence Lau), a service man on leave in Capri where she was vacationing. They had enjoyed each other’s company, but when she invited him to her room for the night he declined. When they meet again on the terrace, he doesn’t remember her.

What follows in this wistful little play is moderately involving. Ruth is the more interesting of the two because she is more of a free spirit, or at least as free spirited as a character gets in a Gurney play. Austin is more representative of a Gurney character, a New England WASP, banker, graduate of prestigious private schools who married the boss’s daughter and is now divorced with two grown children.

All his life, Austin has been convinced that something terrible is going to happen to him. Gurney wrote in an Author’s Note to Later Life that he was inspired by the man in Henry James’ “The Beast in the Jungle” who has a similar fear and so lives his life in such a sheltered way that he finally discovers he hasn’t lived at all, thus fulfilling his prophecy. Austin is not that extreme, but he has lived in a buttoned-down, controlled way.

Jodie Markell and Liam Craig play a variety of party guests, which Gurney wrote is a way of conveying that we can all take on a variety of roles, even in middle age. I hadn’t picked up on that. I saw it as a casting cost-saving measure, with the characters’ main function seeming to be to interrupt the getting reacquainted process of Ruth and Austin. They come and go on the terrace, which has been romantically designed by Steven Kemp featuring the lights of Boston in the background and a star-filled sky. I gasped in delight when I first saw that set.

Austin seems ready for some romance this time around, even though he has gotten used to living alone, which, among the advantages he lists, allows him to fart when he wants. As for whether the two finally become one, you will need to head to Theatre Row before the show’s April 14 closing to find out.
Posted by Retta Blaney at 4:09 AM No comments: