Hugh Jackman and 'The Music Man' finally make it to Broadway 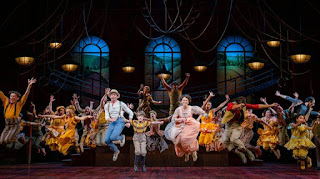 When it was announced in our pre-pandemic world that a revival of The Music Man starring Hugh Jackman and Sutton Foster was coming to Broadway, musical theatre lovers cheered.  But then all live performances shut down, and then stayed shut down, and the show became, to borrow from Tennessee Williams, “the long-delayed but always expected something that we live for.”

And now it’s here, in an exuberant production at the Winter Garden Theatre.  Director Jerry Zaks and choreographer Warren Carlyle give us the kind of high-energy, big song and dance musical that made so many of us fall in love with the form as children.  This presentation of Meredith Willson’s book, music and lyrics — with its cast of 42! — is just what we need now.

Jackson’s mega-watt smile and charm go full blast throughout the two hours and 45 minutes.  He’s 53 but as limber as a 20-year-old as he leaps up onto desks, tables or anything else nearby.  His age is beginning to show in his face, though, so I couldn’t help but think the Professor Harold Hill character he portrays would have been in jail because his con artist ways would have caught up with him. He also didn’t convince me he was a deceitful schemer.  He was too darn likable.  But who wants realism?  This is musical theatre — and Jackman.

I didn’t feel this same joy with Foster’s Marian Paroo.  I had been skeptical about that casting from the start.  She’s a Broadway belter if ever there was one.  Luckily either Zaks contained her or she toned herself down because Marian, a small town Iowa woman in 1912, should not be a belter.

While she moderated her voice I still wasn’t sold on her interpretation of Marian.  Through her gestures and facial expressions she imbues Marian with a kind of comic sensibility that is only a few degrees away from Lucille Ball at times.  And she sings “My White Knight” way too fast, missing its lovely sense of longing and hope.

I’ve seen Foster put this kind of spin on characters before.  Most unforgivable for me was her portrayal of Jo March in Little Women many years ago.  She gave full reign to her belt and comic antics.  In no way did she bring to life the 19th century New England girl I had loved as a child when I read the novel.  I did like her in Thoroughly Modern Millie because that part, a spunky 1920s New York City career woman, was perfect for her talents.  She also gave one of the most powerful and moving performances I have ever seen when she starred Off-Broadway in Sweet Charity.  I wished that show had gone to Broadway so more people could have seen her.

Another problem I had was the lack of chemistry between Jackman and Foster in regard to romance.  I didn’t feel they were two people who had fallen madly in love.  I didn’t see what would attract one to the other, or at least what he would see in her.

Having said that, I can say again, who cares?  I wasn’t  there for realism, I was there for a big, optimistic, good time musical and that’s what I got because everyone of the musical numbers was spectacular.  Scenic designer Santo Loquasto, who also designed the  lovely costumes, wisely keeps the sets to a minimum to make room for full stage dancing.  The sets he does provide include the elegant train car of the opening number, a fairytale-like cottage for Marian, her mother (Marie Mullen) and her little brother, Winthrop (Benjamin Pajek), and a well-stocked library.  He uses the side of a red barn that fills the stage from top to bottom as a backdrop that can open its doors in part to frame little scenes that play against drops painted like those of Iowa painter Grant Wood.  The barn disappears entirely for the large numbers.

One rousing song follows another as we delight in all of those we love so much — “Ya Got Trouble,” “Seventy-six Trombones,” “Marian the Librarian,” and “Wells Fargo Wagon.”  Mercifully the orchestra, with orchestrations by Jonathan Tunick, is not overly amplified.  I had gotten out my earplugs before the show started, thinking I would need them as I do at practically every Broadway musical, and some Off-Broadway, but I put them away unused.

More needs to be said about other performers.  Pajek, in his Broadway debut, steals every scene he’s in as Marian’s shy younger brother with a lisp.  You won’t be disappointed in his “Gary, Indiana” or anything else he does.  Mullen, who is 68, is a strange choice to play the mother of an 8 or 10-year-old boy.  When the family is together they look like three generations, the grandmother, mother and child.  The vast difference in age between Marian and Winthrop is also odd.  Perhaps this is meant to usher in age blindness just the way color blindness, which is a part of this production as well, took hold at least two decades ago.

For comedy, the always-reliable Jefferson Mays and Jayne Houdyshell ham it up as the Mayor and his wife.

As we were leaving the theatre my friend Amy heard a woman say, “Now I can die.”  I was definitely happy too.  This long-delayed show is a gem.

Posted by Retta Blaney at 2:59 PM No comments:

'Intimate Apparel: A New Opera' makes me long for the original play 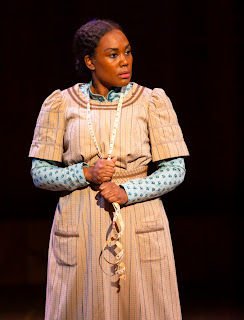 Lynn Nottage’s 2004 play Intimate Apparel has been reimagined as an opera, now playing at the Mitzi E. Newhouse.  My reaction to the two shows couldn’t be more different.

I loved the original, which starred Viola Davis as Esther, a 35-year-old Black spinster seamstress longing for love in 1905 New York City.  It was a simple yet lovely story that made me fall in love with Esther and want her to be happy.

She was strong, but she felt left out of life.  Over the years she attended nearly two dozen parties at her boardinghouse for the other women who were getting married, each time thinking “Why ain’t it me?”

The Esther in the new production, played by Kearstin Piper Brown, asks the same question, only in song, singing, “Love is a music I ain’t ‘ever heard.”   The difference is that the tenderness of the original that made me care deeply about Esther is gone.

Intimate Apparel, A New Opera, for which Nottage wrote the libretto, has a cast of 16 crowding the small stage.  It is busy almost to the point of frenetic.  Under the direction of Bartlett Sher, with choreography by Dianne McIntyre, cast members go back and forth, back and forth, and in circles in scene after scene and when they’re not moving, Michael Yeargan’s set revolves.

The original was enchanting.  I cheered for Esther with her no-nonsense attitude and her refusal to settle just for the sake of getting married, and I worried as I watched her fall under the spell of a mysterious stranger who courts her by letter from Panama where he is a laborer on the Canal, working beside the son of her church’s deacon.  Esther had put away money year after year — $100 for every year she’d been at her sewing machine — to open a beauty parlor for colored ladies.  I waited tensely to see how she would end up.

I was too distracted by the busyness of the opera and the constant need to look up at the subtitles and not the stage.  These two things, plus having the entire story sung in a form I don’t enjoy distanced me from the character I had loved so much.  I felt no involvement in her life, so when the mysterious stranger, George Armstrong (Justin Austin), showed up in New York, I didn’t care.

What I did like, besides Catherine Zuber’s rich period costumes, was Ricky Ian Gordon’s music, a blending of ragtime and other early 20th century American music.  It is performed on two pianos, elevated on platforms on either side of the stage, under the direction of Steven Osgood.

When Intimate Apparel first played in New York, many in theatre circles thought it would win the Pulitzer, but that honor went to Doug Wright’s I Am My Own Wife.  Nottage went on to make history as the first woman to win two Pulitzer Prizes for Drama, for Ruined in 2009 and Sweat in 2017.

Posted by Retta Blaney at 12:49 PM No comments:

Drinking from the well of theatre "Theatre has taken on so many different responsibilities.  It's been sacred, and it's been banned, but throughout all of history, it has had a purpose.  And all people come to it to drink from that well."

Posted by Retta Blaney at 8:45 AM No comments: