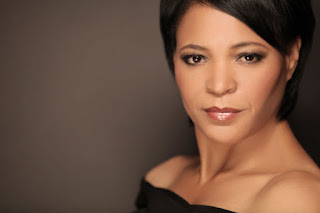 Can you name three African-American women who lived before 1865?  Valerie M. Joyce asks this question to people young and old and rarely finds anyone who can meet the challenge.

Joyce, an associate professor in Villanova University’s theatre department, first asked herself this question five years ago while doing historical research in an unrelated field.  Reading a book of laws, she came upon a reference to an indentured servant in the Virginia Colony in 1649 who was forced to stand in a white shroud and recite a psalm of repentance for having fornicated with a white man.

In a moment of inspiration, she pictured her graduate acting student Kimberly S. Fairbanks bringing that woman and her public shaming to life.  Although she is white and had never written a play, Joyce felt called to tell the story of that long ago black woman in dramatic form. Through extensive research of slave narratives, memoirs, diaries, court records, poems, public addresses and newspaper advertisements she fashioned “I Will Speak for Myself,” a play giving voice to the stories of 16 women who were nurses, slaves, educators and activists in America from the Colonial days to the Civil War.  Fairbanks portrays them all.

“This had nothing to do with my education or dissertation,” Joyce said.  “I had no African-American history.  I saw a vision of Kimberly wrapped in that white sheet and I didn't look back.”

Joyce and Fairbanks sat at the empty bar in 59E59 Theaters where “I Will Speak for Myself” was being presented before heading to the Edinburgh Festival Fringe [Note: It is Festival Fringe rather than fringe festival], the world’s largest arts festival, where it will be performed Aug. 22 through 27.

“These were real women I did not know and I feel honored and blessed and that they are speaking through me,” Fairbanks said.  “As an actress I don’t often get to research people and allow them to be heard.  I feel them before I go out and I say, ‘Please be with me.’”

The show presented in New York had been pared to 45 minutes from 81 to meet the requirements for Edinburgh. Five women’s stories had to be sacrificed and others shortened. The staging, under Joyce’s direction, is simple, just a few props for Fairbanks to use.  Projections of old photos showing little girls in party dresses and elderly women with weary faces effectively set the scene before the show begins and provide the name, date and location for each new woman portrayed.

Joyce used the women’s own words when available and chose whom to portray based on “if I could imagine a moment of dramatic conflict in their life, a very specify actable moment.”

Some of the women express their faith, although Joyce says this wasn’t planned.

“It is there, the deep faith and spirituality just came.  It was not an agenda.”

Fairbanks thinks this is to be expected.

“How else could they survive?  They had to have faith.”

Joyce and Fairbanks say they each have “a lot of faith,” although they aren’t part of any congregation.  Joyce calls herself “a believing Catholic” who attended Villanova for graduate and undergraduate school and “ran back as fast as I could to be a professor there.”  Fairbanks says she “a believing Episcopalian” who grew up in that tradition in Wallingford, PA.  “Before every performance I thank God and my angels,” she said.

It was actually the misuse of religion that gave birth to the play.  Joyce was struck by the injustice of making the young indentured servant, Mary, do public penance for something she had no control over.  She would have been forcefully brought to a country that wasn’t her own, abused by her master, then made to speak with everyone looking at her in a language that wasn’t hers and profess in a faith that wasn’t hers.

She portrays this by showing Mary in her white robe, holding a rod and standing in front of a chapel beside the Elizabeth River in Virginia Colony. “Have mercy upon me, o God, according to thy loving kindness: according to the multitude of thy compassions put away mine iniquities. Wash me thoroughly from mine iniquity, and cleanse me from my sin.”

The prayer continues in a recording of Mary’s voice while the angry words of her heart are expressed simultaneously, with an African drum beating insistently. “Master Cornelius, you made me forsake my gods and baptized me in the Church of England. Your wife taught me this psalm of penitence.  You know William Watts is not my lover. Our ‘filth sin” was not of my desire. You know he comes into the barn at night and forces me to comply.  With a knife at my throat so I don’t make a sound.”

Both voices come together again to conclude: “The sacrifices of God are a contrite spirit: a contrite & a broken heart, o God, thou wilt not despise.”

The racial hatred of the characters’ era is not as extreme now, but it is still quite present, Fairbanks says.

“We’re able to see it now,” she said, mentioning the influence of social media.  “There’s still a fear of someone else.  It’s been learned, the thought that someone else is not worthy.  Now you can see it.”

She said she was “not surprised at all” that the Ku Klux Klan became a factor in the presidential race.  “Racism needs to stop.  We’re too educated to hold onto those beliefs.”

Perhaps, though, we are not educated enough in some areas.  When Joyce asks her “Can you name . . .” question, some people mention Harriet Tubman and Sojourner Truth, but are hard pressed to think of a third black woman from the era.

“I’m fascinated that we can’t name more,” she says.  “We can all name the white men but never the black women.  There’s a complete blind spot in our education. They’re not in the textbooks. No one was writing about them and they couldn’t write for themselves.  I hope people will come away with knowing 11 more now.”
Posted by Retta Blaney at 6:41 AM 1 comment:

Alice in Black and White 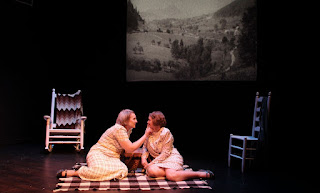 From what I have read about her, the Victorian era photographer Alice Austen was a fascinating woman.  Unfortunately, as presented in Robin Rice’s disjointed play Alice in Black and White, which opened last night at 59E59 Theaters, she comes off as rather bland and frivolous.

Rice introduces us to Alice as an 11 year old in 1876 living an upper middle class life in the family home, Clear Comfort Farm, on Staten Island with her transcendentalist grandfather (Ted Lesley) and her mother (Shannon Woolley Allison), an angry woman who has been abandoned by her husband, Alice’s father.  Jennifer Thalman Kepler (left in photo), under the direction of Kathi E.B. Ellis, bounces around trying unsuccessfully to look and sound like a child.  This is the first of many misdirections by Ellis.

It is at this age that Alice develops her interest in photography, an interest that would lead into a life as a bold street photographer, something unheard of for a woman of her time.  Rather than focusing on her career — and her love affair with Gertrude Tate (Laura Ellis, right), a woman who would become her life partner — Rice dilutes Alice’s story with secondary plots that keep intruding.

In the one, set in 1951, that most often overtakes Alice’s story, Rice gives us Oliver Jensen (Joseph Hatfield), the historian who searched for her negatives to publish them.  This might have worked if it were less obtrusively developed, but Rice blows this plot line into a battle of the sexes as Oliver spars with the prim Historical Society receptionist Sally Lally (Trina Fischer). Their unconvincing story interprets Alice’s repeatedly.

The play won the StageWrite Women's Theatre Initiative Award and received its world premiere in Louisville, produced by Looking for Lilith Theatre Company, which revived its production for the occasion of the 150th anniversary of Alice's birth.  I’m sorry to say that as staged at 59E59, the writing, direction and acting all come off as an amateur production.

Too bad for Austen, who deserves a better presentation.   Photography was an exotic enterprise when when she began pursuing it.  Her life spanned two centuries — from 1866 to 1952 — and in that time she lived on her terms, capturing more than 8,000 images.   Thirty-five hundred of these are known to exist today.  They include family portraits and documentary-style shots of workers in New York.  She also spent years at quarantine stations photographing immigrants.  I got no sense of this depth from Rice’s offering, although scenic designer Christé Lunsford makes nice use of Austen’s photos in projections around the stage.

The most involved I felt in Alice’s life was at the end of the play when she is destitute and disabled, living in a home for the indigent.  Kepler speaks no words, but conveys Alice’s humanity in her silent dignity sitting alone in her wheelchair. This is a relief after all the busyness of the production.

At the start of the play Rice has Alice define her life’s purpose.  I hope one day this will be better dramatized.

“I’m a preservationist,” she says.  “My photographs might find their way to an historical museum some day, but they’re history, not art.  That vase was brought from Germany wrapped in this quilt over 100 years ago by Granpa’s sister.  The story is what matters, not what the vase could bring at auction.  Preserving the past, that’s what matters. Money comes, money goes.  A dollar today will be a penny tomorrow, but that vase has intrinsic value.  I won’t waste time on stupid stuff.”

Austen’s childhood home on Staten Island has been turned into a museum, the Alice Austen House, devoted to her life and work.  I’d like to visit it, then I would like to see Austen’s life done as a one-woman play.  Secondary characters could be conveyed by a change in voice, but the story would remain centered on this strong woman who lived against the grain in her choice of career and life partner.
Posted by Retta Blaney at 11:18 AM No comments: