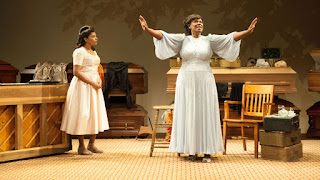 My third biographical play of last week, the world premiere of George Brant’s Marie and Rosetta, was another involving afternoon in the theatre thanks to the powerhouse voices of Kecia Lewis and Rebecca Naomi Jones and Brant’s witty and ultimately poignant script. The Atlantic Theatre Company production, under the direction of Neil Pepe, offers a visit with the late gospel singer Sister Rosetta Tharpe (Lewis) as she prepares for a performance and tour in 1946 Mississippi.

“You’ve got to know what your gifts are worth,” she tells Marie Knight (Jones), the 23-year-old singer she has just plucked out of backup work to be her performing partner.

Lewis’s Rosetta knows her worth, and she shares her singing techniques and life lessons with Marie as the two prepare in a funeral home, the only place Rosetta says is open to black entertainers in the Deep South. This will not only be where they rehearse; they are to sleep there that night as well. Marie is spooked (pun intended) by the caskets, but Rosetta assures her “they’re nothing but a bunch of souls gone to glory.”

Their stage that evening will be in a warehouse. “We ain’t playing no Carnegie Hall tonight,” Rosetta says with resigned acceptance. By that time she was a big star, a contemporary of Mahalia Jackson, “Saint Mahalia,” she sarcastically calls her rival for her “high church” singing. Rosetta prefers to add some “swinging hips” to her performances.

During the 90 minutes with no intermission, Rosetta wins over Marie, who at first is horrified by the older singer’s attempts to get her to drop her own high church singing and put some swing into her gospel. “Your joy has hips,” Marie says reproachfully.

But Rosetta is determined to loosen up her protégé, in her piano accompaniment as well as her singing. “Your piano’s an old maid with a gray tabby on her lap,” she scolds.

Rosetta makes her a deal. “You swing it for me and I’ll church it up for you. It’s hips or the highway.”

In real life the two women were a hugely successful performing duo. Rosetta had already achieved fame in the 1930s and 40s, singing with the likes of Jimmy Dorsey, Duke Ellington and Cab Calloway. She was also considered the queen of “race records” and was admired for her guitar playing and electric guitar playing as well as her singing. Elvis and Jimi Hendrix credited her as inspiring their careers.

I first heard Lewis (right in photo) when she sang with the Paul Winter Consort. She nearly blew the dome off of the Cathedral Church of St. John the Divine, the world’s largest cathedral. After she finished singing "His Eye is on the Sparrow," Winter said he didn’t know anything on land that could compete with that so he followed with a recording of whales. That was nearly 30 years ago and she’s still got the pipes. As does Jones. They treated us to about a half dozen gospel and blues numbers — I really loved “I Want a Tall, Skinny Papa” as well as “Were You There When They Crucified My Lord?” I felt I was one of the souls gone to glory. Although they are the only two characters, their voices have the effect of a mighty chorus of gospel voices.

Marie and Rosetta features some mean piano and guitar playing. Although the actresses do a good job of faking it, at least for the piano, the real musicians are revealed at the curtain call — Deah Harriott on piano and Felicia Collins on guitar.

The other two biographical shows I saw last week were Maestro, about Leonard Bernstein, and Fiorello!, about the former mayor of New York. I recommend all three.
Posted by Retta Blaney at 4:16 PM No comments: 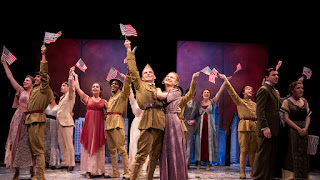 Whatever character flaws Fiorella LaGuardia had, you won’t find them in Fiorello!, the Jerry Bock, Sheldon Harnick, George Abbott and Jerome Weidman’s musical about New York’s pint-sized former mayor. But you will find lots of heart and fun in The Berkshire Theatre Group’s revival of this Pulitzer Prize and Tony Award-winning musical, now at The East 13th Street Theater.

Directed by Bob Moss, this is the first full-scale New York City and Off-Broadway revival of the hit musical, which was last seen on Broadway in 1959. Its enthusiastic cast, headed by Austin Scott Lombardi (photo, center), tells the story of a son of Italian immigrants, the man known as the “Little Flower” (his first name in Italian), a lawyer who fought for the poor and disenfranchised, “working on the side of the angels.” He became a Congressman from New York who bravely took on the corruption of Tammany Hall, then was a distinguished soldier in World War I and, after an initial defeat, the city’s mayor.

The show is two and a half hours but, with its spirit of an old-time musical and the energy of the young cast, it never drags. Carl Sprague has designed a set made up largely of cutouts of famous NYC buildings and a few tables and chairs, all of which can be pushed on an off stage easily, and replicas of old newspapers cover the stage floor.

David Murin’s costumes are a delight, especially when we move into the 1920s — love those black and rhinestone flapper dresses.

Michael Callahan has choreographed lively dancing that fills the small stage. I especially liked the ballroom dancing for “Till Tomorrow,” a moving number marking Fiorello’s departure for the war.

The singing is strong and clear. Rebecca Brudner, playing Fiorello’s first wife, Thea (in photo with Lombardi), gives an exquisite performance of “When Did I Fall in Love,” probably the show’s best-known song, where she reveals her surprise at how deeply she has fallen in love with her husband over the years.

I also appreciated Chelsea Cree Groen who plays Dora, a striking factory worker Fiorello helps early in his career. She has a beautiful voice and good comic timing.

Music director Evan Zavada has arranged the score for two pianos and a violin, and this simplicity works just fine.

It’s a treat to go to a show about a good guy who stays good, with cheery music and actors who break into song and dance without a moment’s notice. As I said, a truly old-fashioned musical. In this season of vile politics with not a good guy to be seen, it’s refreshing to have this fantasy.
Posted by Retta Blaney at 3:23 PM No comments: 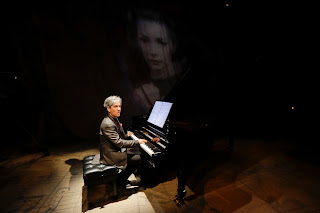 He entered from the back of the theatre, a cigarette in one hand and a drink in the other. Then Hershey Felder turned to the audience at 59E59 Theaters and for the next hour and 45 minutes straight brought Leonard Bernstein’s life and talent to life in his one-man biographical play with music Maestro, which opened yesterday and runs through Oct. 16.

Felder brought such passion to his performance that it was easy to think we were actually being addressed by the great conductor and composer himself. The show, directed by Joel Zwick with a book by Felder, brings together brilliant storytelling and piano performances of the music of Bernstein and others.

From Francois-Pierre Couture’s set consisting of little more than a grand piano, Felder takes on— often comically — the roles of Bernstein’s Russian immigrant father and the artists who inspired him, and he tells stories about his family’s background, his wife, Felicia Montealegre, and his numerous homosexual relationships. Classical compositions and singing, especially songs from Bernstein’s Broadway shows like West Side Story and On the Town, accent the storytelling.

We learn that Bernstein met his fate when he was about 10 and his aunt gave her upright piano to his family. As soon as he put his fingers to the ivories he was enchanted.

“I went over to touch a note, and a second and a third, and somehow, by some miracle, I managed to find a chord, and I feel in love.”

He was able to play by ear songs he heard at school, much to the dismay of his father who thought he should use his hands to make money so they wouldn't have to “live like poor immigrants, chasing away from bill collectors.”

Leonard pursued his music anyway, taking $1 piano lessons from a neighbor with money he earned “with these little jobs I had for myself.” After a year, though. she told him she had taught him all she could and recommended he study at the New England Conservatory. But his father refused to pay the $3 per lesson, saying such a bright boy should grow up to be a rabbi, not a klezmer. Leonard earned the money this time by teaching piano to neighborhood children. His father later would discover how well this paid off.

After years of study and gaining recognition, a 25-year-old Bernstein, hungover from late night partying, received a 9 a.m. call that would change his life. Now an assistant conductor of the New York Philharmonic, he was to be a last-minute substitute for guest conducer Bruno Walter that afternoon at 3 — for a live national broadcast.

“Such a thing hadn’t happened before in anyone’s memory at the New York Philharmonic if it ever happened at all,” he says. “I was backstage, just before the performance, pacing like a madman, can you imagine? Twenty-five years old — the pressure — the whole nation and not even one rehearsal.”

A recording of the Schumann Manfred Overture plays and Felder conducts. I felt I was in a concert hall, one of the many times I was transported during this show.

“After Schumann’s Manfred Overture came Strauss’ ‘Don Quixote’ and I blew the roof off of Carnegie Hall. The next morning, the story calling me a ‘genius’, a natural, the first-ever born, bred, educated, all-American conductor, appeared on the front page of the New York Times and was picked up all over the world. . . a 25-year-old skinny Jewish kid from Lawrence, Massachusetts, conducting one of the greatest ensembles in the world.”

Over the years international success followed, although not in his personal life. In the end, though, Felder’s Bernstein rages that his legacy is to be known as a great conductor and not a composer. He lists his achievements, which include creating a symphony orchestra for the State of Israel and conducting the entire of Beethoven’s Ninth Symphony from the fall of the Berlin Wall in a globally televised broadcast, plus hundreds and hundreds of concerts all over the world, dozens upon dozens of recordings, and composition after composition.

“But you know what? No one gives a God-damn about conductors. The only ones they care about are composers. All of them have serious pieces, at least one serious work that every single one of you know, that each of you can sing the theme of . . . ‘ta-da-da-da.” He challenges the audience to a group sing of something from an opera or sonata of his or his Mass. The lack of response makes his point. He ends as he began, singing “Somewhere” from West Side Story.

Whatever regrets Bernstein may have had, I would hope if he saw Felder’s portrayal of him he would understand he was a great gift to the world. As is Felder in this production. I want to see more of his solo shows, which include George Gershwin Alone, Monsieur Chopin and Beethoven.

After his curtain call Felder returned to the stage and, in honor of yesterday’s 15th anniversary of the Sept. 11, 2001 terrorist attacks, paid tribute to another great American composer, Irving Berlin, leading the audience in singing “God Bless America.” It was a beautiful end to a beautiful afternoon.
Posted by Retta Blaney at 2:03 PM 1 comment: