Love, Noel: The Songs and Letters of Noel Coward 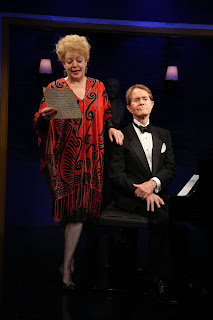 Lord Louis Mountbatten gave a speech at a 70th birthday party honoring his friend Noel Coward in which he said, “There are probably greater painters than Noel, greater novelists than Noel, greater librettists, greater composers of music” and went on to include singers, dancers, comedians, tragedians, stage producers, film directors, cabaret artists, TV stars.  “If there are,” he concluded, “they are 14 different people.”  A great many of these personas are brought to life by cabaret veterans Steve Ross and KT Sullivan in Love, Noel: The Songs and Letters of Noel Coward, the charming play with music devised and written by Barry Day, in production until Sunday at the Irish Repertory Theatre.

“I don’t think anyone has ever made a better summary of the man who bestrode the first three-quarters of the last century,”says Sullivan in her role as Woman.  “He did everything and knew everyone, as his letters testify.”

Under the direction of Charlotte Moore, Ross and Sullivan read many of those letters and sing two dozen of Coward’s songs during the chuck-full 80-minute show.  Coward wrote to his mother weekly when they were apart and she saved every letter for 50 years.  Fortunately many others were saved as well.

The letters and supporting material are presented in character — the debonair Ross is a worthy embodiment of the debonair Coward — or in dialogue as Man and Woman.  Many of the famous people who made up Coward’s orbit appear in delightful ways.  Sullivan is hilarious hamming it up as Elaine Stritch singing “Why Do the Wrong People Travel?”  She also does delicious takes on Marlene Dietrich and Greta Garbo.
At the start of the show I was startled by the stars’ appearances.  The older woman next to me said to her companion, “They’ve aged.”  That was my reaction.  I thought back to the last time I had seen either singer and realize it’s probably been a decade.  I should have expected they would have changed — I don’t even recognize myself in the mirror anymore — but I wasn’t prepared.

Then when they sang the opening number, “Where Are the Songs We Sung,” it seemed so lifeless I wondered if age had diminished their talent as well.  But not to worry.  In a short time they were lively storytellers and singers.  Sullivan occasionally spoke so fast I didn’t have time to take in all of the wonderful anecdotes she was spinning.  Only at first, though.

One thing not affected by time is Sullivan’s gorgeous soprano.   She has the same exquisite voice she has always had.  And Ross can play the piano as powerfully as ever.

It was nice to see these two together for an entire show.  I’ve seen them join for a song or two at the Dutch Treat Club but never for such an extended project.  They are both well established solo cabaret stars but they play together in Love, Noel as if they’ve been an act for years.  The mark of true professionals and true talent.

The creative team also offers talent and professionalism.  James Morgan has created a simple and tasteful set (doesn’t he always?) for the downstairs Studio Stage — a baby grand center stage before a royal blue backdrop and a bust of Coward.  Michael Gottlieb provides appropriate lighting.

The friend who accompanied me and I are both going through a really rough time but we left the theatre with greatly uplifted hearts.
Posted by Retta Blaney at 1:16 PM No comments: 
Designed as a program of song, dance and story to celebrate the spirit of the new theater season, BROADWAY BLESSING was founded in 1997 by Retta Blaney, who produced the event for the first 16 years. Produced now by Pat Addiss and Kathryn Fisher, BROADWAY BLESSING 2019 promises to be another exciting evening.


Chita Rivera is scheduled to give a special tribute to Hal Prince. Performances by other Broadway and Off-Broadway talent from Ain’t Too Proud, Fiddler on the Roof, Phantom of the Opera, Lion King, Desperate Measures and Hair will also perform, along with the Broadway Blessing Choir and Instrumentalists under the direction of Stephen Fraser. George Drance, SJ (La MaMa, Magis Theatre) will return as emcee. The evening will culminate with a moving candle-lighting ceremony led by clergy from various churches and Rabbi Jill Hausman from the Actors’ Temple.


ST. MALACHY’S was founded in 1902, and THE ACTORS’ CHAPEL was established in 1920. St. Malachy’s Church - The Actors’ Chapel is a spiritual oasis in New York’s heart for Broadway artists and fans alike. Chiming “There’s No Business Like Show Business” every day, a half hour before curtain, the chapel has welcomed such theater greats as George M. Cohen, Douglas Fairbanks, Rudolph Valentino. Florence Henderson, Elaine Stritch, Danny Thomas, Bob and Dolores Hope, Antonio Banderas, Liam Neeson and countless others. Under the leadership of Fr. John Fraser (pastor) and Stephen Fraser (director of music) it continues to offer programming to the Broadway community and develop the talent and work of the next generation of Broadway stars.
Posted by Retta Blaney at 9:40 AM No comments: 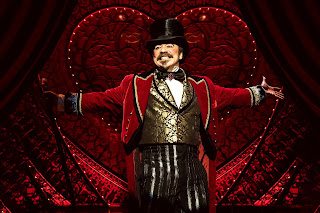 It's funny that a show about bohemians in 1899 Paris is the most lavish new musical on Broadway, produced for a whopping  $28 million.  The Al Hirschfeld Theatre is ablaze with color -- red! -- neon lights, golden pillars, a giant blue elephant and a windmill for Moulin Rouge!, the theatrical version of Baz Luhrmann's 2001 cult film. I've never seen anything like the number of people crowding the front of the house to snap photo after photo before the show began.  The curtain didn't need to rise for the entertainment to begin.  Derek McLane's nightclub set sees to to that.

For the most part, the spectacle continues.  I loved the songs.  In the playful spirit of the movie, songs or snippets of them -- more than 70 -- from the 1960s to the present are woven throughout.  The anachronism of hearing a struggling young composer in 19th century Montmartre breaking into "The hills are alive . . ." is a hoot.

Alex Timbers directs this big bustling show that is one of the hottest tickets in town.  Sonya Tayeh provides the lively choreography, and musical supervision, orchestrations, arrangements and additional lyrics are by Justin Levine. Those vibrant, sensuous costumes -- more than 200 corsets, bustiers, skimpy lingerie, cancan dresses and lush gowns -- are courtesy of Catherine Zuber and the bright lighting -- red! -- is by Justin Townsend.

All of this razzle-dazzle wasn't enough to keep the show from dragging for me, though.  The oft-told story -- book by John Logan -- doesn’t sustain for 2 hours and 35 minutes. Christian, a young composer nicely played by Aaron Tveit, comes to the Left Bank from Lima, Ohio, to bask in the artistic community and get his show produced.  He falls in love with a dying cabaret courtesan, Satine, played without much sizzle by Karen Olivo.  Satine is the star of the Moulin Rouge.  Or at least she's the onstage star.  The real star is the owner, Harold, delightfully played by Danny Burstein (in photo).  Throw in the Duke of Monroth (Tam Mutu) who sinisterly make it clear he owns both Satine and the nightclub and you can pretty much anticipate what will happen.

It's the music, credited to 161 writers from Rodgers and Hammerstein to Lady Gaga, and the dancing that carry the evening. With all those songs, what was the one that played in my head walking home, and is still playing in my head days later?  "Lady Marmalade" -- "Voulez-vous coucher avec moi ce soir."  Luckily I've always loved it.
Posted by Retta Blaney at 1:38 PM No comments: