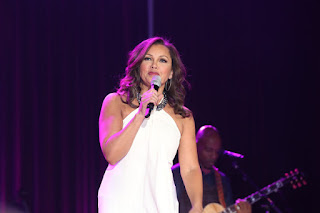 With the theme of Family, The Salvation Army Greater New York Division held its 68th Annual Gala December 8 in the Broadway Ballroom at the Marriott Marquis in Times Square, uniting old friends and new into the Army's family.  Hosted by former New York Giants offensive lineman David Diehl and broadcaster Bob Papa, the evening featured a Musical Invocation by Will & Anthony, a Christmas Message delivered by His Eminence, Timothy Cardinal Dolan, performances by The Army's Greater New York Youth Band & Chorus and a concert by Vanessa Williams.


Lt. Colonel Guy D. Klemanski presented the Army's highest honor, The Pinnacle of Achievement Award, in memoriam to the Wellington and Ann Mara Family. Owners of Giants, the Maras worked closely with The Salvation Army during their years of philanthropic giving.  "The Maras represent The New York Giants, of course, but they also have giant hearts, which they use to give back, creating immense positive changes for those around them," Colonel Klemanski said.  One of their 11 children, John Mara, the President and CEO of The Giants, accepted the award.


The Fire Department, City of New York, which like The Salvation Army is celebrating its 150th anniversary, was presented with The Army's Community Service Award.


The evening, attended by nearly 800 people, also kicked off The Salvation Army's annual Red Box Campaign, which provides what for some individuals and families might be the only gift they receive this Christmas, a box filled with food, warm clothes and toys.  Last year the Red Box Campaign generated more than $450,000 in support.

Posted by Retta Blaney at 11:29 AM No comments: 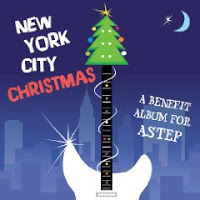 Back by popular demand, the evening will feature Broadway's most sought-after talent singing new and classic holiday songs. Expect fresh, original approaches — pop, soul, R&B, rock and more — to your favorite seasonal numbers, many of them captured on the Sh-KBoom/Ghostlight album "New York City Christmas," available for purchase at the concert.

Tickets are $100 each for premium seats, $75 each for general seating. ALL proceeds from tickets to the show and album sales go to supporting ASTEP's mission to connect performing and visual artists with underserved kids, awakening their imaginations, fostering critical thinking, and helping them break the cycle of poverty. ASTEP places volunteer artists in India, South Africa, the Dominican Republic, New York and Florida and supports the efforts of ASTEP Chapters in more than a dozen communities around the U.S.

A special silent auction will also be held during the concert, featuring sought-after items such as:

Tickets are available for purchase online through the Joe’s Pub website or at the box office at The Public Theater, 425 Lafayette Street. Seating is limited.

For more information about ASTEP visit www.astep.org or e-mail Davinia Troughton at  davinia@asteponline.org.

The album is available for purchase through iTunes, Amazon.com, and sh-k-boom.com.

ABOUT ASTEP
ASTEP was conceived by Broadway musical director Mary-Mitchell Campbell and Juilliard students to transform the lives of youth using the most powerful tool they had — their art. Today, ASTEP connects performing and visual artists with underserved youth in the U.S. and around the world to awaken their imaginations, foster critical thinking, and help them break the cycle of poverty.

Since 2003, ASTEP’s programs have engaged children ages 4-21 years old through collaborations with schools and community organizations. Our partner organizations help us tailor our programming to address specific needs and risks youth face in their communities, including HIV/AIDS, teen pregnancy, and abuse. In addition, our programs are research-based, employing accredited learning standards to train artists and create arts curricula. Youth attending ASTEP programs are not only inspired and supported emotionally and creatively, but also develop specific, important skills they use to make healthy and productive decisions.
For information on how to get involved or to donate, please visit www.astep.org. 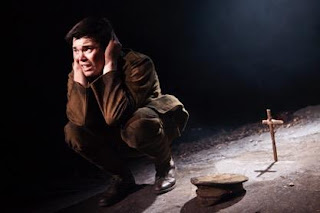 Seeking to enhance his performance in the one-man World War I play he had written, actor Alex Gwyther spent a night in a replica of a 1916 battlefield trench outside London. By morning, though, exhausted from having slept little on the chicken wire in the “officers’ quarters,” he was no longer thinking about his skills.

“What really struck me was I was dying for a bacon sandwich and a cup of tea, typical English,” he said, adding that he couldn’t imagine living that way for an extended time.  “What would it be like to be attacked or shelled?  Most of that I have to leave up to my imagination.”

During a telephone interview from his parents’ home in Surrey outside London, Gwyther, 29, explained how he came to write and star in a play about one particular episode in the four-year-long war.  World War I was part of his school curriculum growing up in England, but he felt the 1914 Christmas Truce was glossed over. In that event, English, French, Belgian  and German soldiers crawled out of their trenches on Dec. 25 to share small gifts like cigarettes, food, hats and buttons, to bury their dead and to play football.  Then the fighting resumed. In some places the trenches were so close, about 100 feet apart, one side could smell the other’s cooking.

“I always thought there must be more to the story than a football match,” he said.  “How crazy that they came together and then went back to fighting each other.”

Gwyther began researching the event and was surprised by what he found.  The result, developed with director Tom O’Brien, is Our Friends, the Enemy, which will have its American premiere at Off-Broadway’s Theatre Row Dec. 8 to 20. The 50-minute show played to sold-out houses in London, had two tours of the United Kingdom, totaling 11 weeks, where it was seen everywhere from “village halls to football stadiums,” as well as a month-long run at the prestigious 2013 Edinburgh Festival Fringe. It also has been heard on BBC radio.

“It’s one of the stories we know but we don’t know these details about.  I thought, ‘If only people knew about this.’”

What Gwyther had thought was crazy, men returning to kill each other after a day of fellowship, was not how the soldiers wanted it.  Many refused to fight the next day and for days after that.  It was those in command who, fearing a weakening of resolve, pushed the battle into full gear.  Some two-thirds of the troops, about 100,000 people, are believed to have participated in the legendary Truce.

“A lot of people didn’t know that both sides increased fighting massively after that.  They didn’t want soldiers fraternizing that way,” he said, adding that mustard gas was then introduced prematurely. “They didn’t want the soldiers to have that opportunity again.  That’s why there was not another Christmas Truce.

“It’s sad, but it’s inspiring that it actually happened.  I can’t imagine that happening in today’s world conflicts.”

Books and movies have captured this time in history, but to Gwyther’s knowledge no play has been written solely about the Christmas Truce, although it was featured as a scene in another play, Oh, What a Lovely War and the Royal Shakespeare Company staged an account with music.

For his play, Gwyther read books and diary accounts to make his stories authentic, but decided against using real names. Instead, he created Private James Boyce, a young English soldier, to act as narrator, sharing his diary entries as monologues for the audience, as well as providing narratives of different scenes happening spontaneously across the front lines.

“He’s like Scrooge, taking the audience across the western front and telling what was happening.”

As the audience enters, James is onstage, dressed in an authentic World War I uniform, cleaning his rifle, propping up sandbags and looking out toward the German trenches.  After the theatre door closes, the lights change to a single spotlight on James as he walks forward, drops to his knees and prays. After a brief blackout, he begins to tell his story and those of his fellow soldiers on either side of the divide.

Andy Robertshaw, a World War I “guru” who was Steven Spielberg’s military advisor for “War Horse,” filled that role for Gwyther, supplying him with his uniform and equipment and arranging for him to spend the night in the trench. During that Saturday night experience, around 1 or 2 in the morning, Gwyther looked into the clear sky and saw stars. “It was quite moving.  It’s what it must have been like after a week or so being attacked, to look at stars and think of home.”

Managing his heavy gear, listening to the intense shelling (firecrackers) and being “gassed,” Gwyther felt he better understood his characters and what they went through.  “Before, it felt phony trying to pretend I knew what it was like living in a trench.  I wanted the proper experience so I could be more truthful.  It helped me as an actor to get into the mindset of a soldier.”

He also realized he probably wouldn’t have survived since he didn’t get his mask on in time when the surprise canister of thick, putrid “gas” was lobbed.  He couldn’t see a thing and began choking on the fumes.   “I think I would easily have died.”

World War I, which claimed 15 million lives, was different because its reasons were not so clear, Gwyther says, and because it was fought by “ordinary people, doctors and school teachers,” not trained soldiers. “Neither wanted to be there.  They were fed propaganda.  After the Truce they realized these are decent guys.  We don’t want to be here.”

The people in power “sign-off,”  not seeing “these are individuals being sent to war,” Gwyther says.  The play “highlights the futility of war and shines a light on how easy it is to send people to war.”

Gwyther keeps photos of WWI soldiers backstage and looks at them before each performance.

“It gives me perspective.  How would they want their stories to be remembered?  It reminds me why I want to tell them.”
Posted by Retta Blaney at 11:13 AM No comments: