Harry Smith is just wild about The Salvation Army 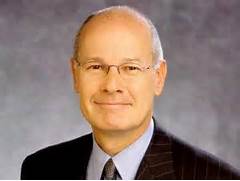 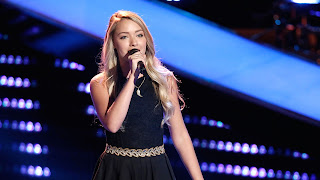 Our Salvation Army Gala at the Marriott Marquis was lovely last night, and we raised more than $1.1 million.  Emily Ann Roberts, a sweet 18-year-old former finalist on “The Voice,” sang Christmas songs, accompanying herself on guitar and with our Army band and choir.

The highlight of the evening of me, though, was when host Harry Smith went off script to talk about his experiences with The Salvation Army. Shortly after he had been asked to come to New York to join CBS 35 years ago, he was taken to 21 and was excited to be in such a big-time celebrity hot spot. While he was eating, some Salvation Army choir members came in and began singing Christmas carols. Since the words were well-known, people joined in.  He saw titans of industry and entertainment singing along with tears in their eyes.  He was told the Army choir did that every year so he decided to have them on his show. He also happened to play tuba so he played on air with the Army band. Last night he joined them onstage to play for us as well.  What a good sport.

He then said how for 40 years as a journalist whenever he was covering a disaster, he would arrive with his crew and they would travel down some dirt road and see destruction and people wandering around dazed and there to the side would be a Salvation Army truck handing out sandwiches and coffee.  He saw this too at the World Trade Center where the Army had set up a half dozen sites and maintained them throughout the long months of clean up, giving out coffee and sandwiches to all the workers.

Hearing those testimonies made me all the prouder to work for The SA at this time each year.  I am truly blessed and duly grateful.
Posted by Retta Blaney at 4:03 PM No comments: 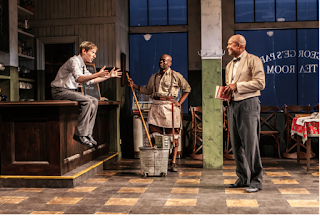 “Master Harold” . . . and the Boys is the most painful of Athol Fugard’s plays for me to journey through. One of our former priests at St. Bart’s who used to say, “Hurt people, hurt people” and that is certainly manifest in this play and the powerful revival it is receiving at The Pershing Square Signature Center, through Dec. 11.

The playwright directs his 1982 story of Hally, a lonely young white boy, and his friendship with Sam, a black man, in mid-20th century apartheid South Africa. The performances are heartbreakingly real, making the grief all the stronger when the friendship is abruptly ruptured, perhaps beyond repair.

Fugard is a white Southern African playwright, actor and director whose work is revered in his country (now), ours and England. He has used his playwriting gifts for more than half a century to highlight the injustices of the apartheid that ruled his country for so long.

The unjust system is given a human face in his plays, in this one especially touchingly. Hally (Noah Robbins) is a prep school boy of 17 when the play opens in 1950. His friendship with Sam (Leon Addison Brown) goes back to his short pants days when, living in a boarding house with his mother and drunken, invalid father, he used to find refuge in the small room Sam shared with Willie (Sahr Ngaujah), who also is black and in his 40s like Sam.

“Life felt right-sized in there,” Hally says wistfully one rainy afternoon as he reminisces with Sam in the St. George’s Park Tea Room, which is owned by his mother. (Scenic design by Christopher H. Barreca; lighting by Stephen Strawbridge). Sam works there as a waiter and Willie cleans the floors, when he’s not joking around with Sam or complaining about his girlfriend, whom he beats regularly. The feeling is of three people whose bond goes way back and who are comfortable together without racial division.

Through the years Hally has been educating Sam from his own schoolwork, teaching him geography and vocabulary. Sam is a willing recipient of this learning. It becomes clear, though, as the two talk that Sam’s main role in Hally’s life has been father figure. One particularly lovely memory the two share is of the day years earlier when Sam had made a kite for Hally and taught him how to fly it. It was a happy day for both, but it is only in the present that we learn why Sam had chosen to make the kite at that time. Hally’s father had passed out drunk in a bar and the boy was called upon to come get him. Hally had to ask permission for Sam to enter the bar, after which Sam carried the father home over his shoulder with the shamed child following behind. The father had soiled his pants and Sam and Hally had had to clean him and put him in bed. After that, Hally walked around with his eyes cast downward for days. Sam decide to make a kite so Hally could focus his eyes skyward. That is the kindness and love Hally had received from Sam, but in the present day Hally’s anger at his father causes him to turn on Sam in unbearable cruelness at the play’s climax.

All the performances are first rate. Hally and Sam commune with a natural ease, but when the tide turns, the tension is so deep the entire audience seemed to collectively hold its breath. The change in Hally’s mood is triggered by a call he receives from his mother saying she is bringing his father, who has been in the hospital, home. She then put his father on the phone and Hally tries to put up a jovial front. Robbins portrays a Hally transformed. He crumbles to the floor, anguish stiffening his face, as he tries to assure his father, “chum,” that he is looking forward to his return. He looks hollow, ghostly.

When Hally betrays Sam, Brown is a man wounded to his soul. I’ve never been as affected by that scene as I was seeing it performed by these two fine actors. The name of the play comes from Hally’s insistence that Sam now call him “Master Harold.” “You’re only a servant here and don’t you forget it,” he says. Cruel. Soul-cuttingly cruel.

Just before the conflict reaches this point, Sam implores Hally to “stop before it’s too late. Someone’s going to get hurt.”

“It’s not going to be me,” Hally says smugly.

Both are hurt. Fugard leaves the door open as to whether they will ever heal together.
Posted by Retta Blaney at 3:41 PM No comments: 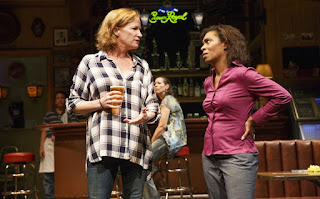 A flicker of humanity flashes at the end of Lynn Nottage’s latest play, Sweat, directed by Kate Whoriskey at Off-Broadway’s Public Theater. Hope is a hallmark of the Pulitzer Prize-winning playwright and it is needed after the two and a half hours of economic hardship, tattered friendships and thwarted dreams among the workers in a steel-tubing factory in Reading, PA, as they face the closing of the plant that has employed generations of their families.

“Started in `74, walked in straight outta high school. First and only job,” says Tracey (Johanna Day, left in photo) whose friendship and working relationship with Cynthia (Michelle Wilson, right) and Jessie (Miriam Shor) goes back for decades.  All are in their 40s at the start of the play in 2000 when rumors of layoffs  begin. Time alternates with 2008 when the plant has closed.

After work the women hang out together at a local bar managed by Stan (James Colby), who worked at the plant for 28 years before injuring his leg in a machine accident at the plant. (Set designer John Lee Beatty has created a bar so real-looking I felt I could walk right in and order a beer.) The four of them have the camaraderie of people who have shared lives for years. This unity is marred, though, when Cynthia, the African American member of the group, is promoted to management. Tracey, who also had applied for the job, says Cynthia was chosen because of her race. Her resentment drives a wedge between them. In the end they will all be unemployed, but without the strength of the friendship that had sustained them.

While this might sound bleak, and it is, Nottage is skilled at creating people we care about and cheer for. These characters are based on her many visits to Reading over the years where she got to know the citizens, from the mayor to those who sleep in the woods because they lost their homes.  The city was ranked as the country’s most economically depressed in 2011.

The playwright’s empathy for her characters is another hallmark of her work. In Ruined, for which she won her Pulitzer in 2009, we feel for the young women in the bar and pool room run by Mama Nadi in a small town in the civil war-torn Democratic Republic of Congo. The girls must provide more than food and drink to the soldiers and miners who arrive daily, and while it seems Mama is pimping them, which she is, she also is providing them a home and family life together and protection from the gang rapes and homelessness they would face on the outside.

My favorite Nottage work is Intimate Apparel (NCR 4/30/04). I cared deeply for its heroine, Esther, who was played movingly by Viola Davis Off-Broadway in 2004.  Esther was a 35-year-old hard-working seamstress living in a boarding house whose longing for love led her to be charmed out of her life’s savings by a man she met through the son of her church’s deacon. I loved her no-nonsense attitude and humor and I wanted her to be happy.

In this latest work by Nottage, I could relate to the women because I’ve had times of being unable to find work and I know the fear and demoralizing sense of that experience. The Public Theater’s artistic director, Oskar Eustis, explained in a program note why the play is timely.

“The decline of unionism, the weakening of the federal government, loss of legitimacy of the idea of collective action and the increasing power of the market to monetize everything have helped return us to a level of inequality not seen since the Gilded Age,” he wrote.

He praised Nottage for tackling the subject “on the ground,” in the lives of individuals who were being overwhelmed by huge historical shifts.  “She writes, not from the airy tower of an intellectual, but from the lived experience of working people.

“However, she also does what a great writer does, and makes these idiosyncratic, terribly specific individuals representatives of us all. They are working class everywoman and everyman, reflecting back to ourselves the truth of our country and our times.”

The play’s portrayal of the decline of factory jobs in the rust belt was also a topic in the presidential race, with both candidates appealing to those voters.

Sweat was commissioned and first produced by Bill Rauch and the Oregon Shakespeare Festival.  It then traveled to Arena Stage in Washington, D.C. The New York premiere continues through December 18.
Posted by Retta Blaney at 4:46 PM No comments: