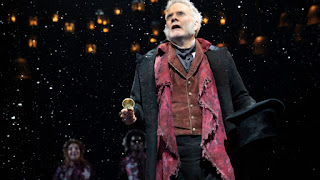 I have always been a sucker for A Christmas Carol.  Like many people, I first encountered this story of a drastic change of heart from "Mister Magoo's Christmas Carol," the 1962 cartoon that ran on TV every year, giving me the smarts to quote Victorian literature long before I was to ever hear of Charles Dickens.

Even if I didn't already like this story I would have fallen in love with the magnificent current Broadway production at the Lyceum Theatre.  Under the immensely creative direction of Matthew Warchus, with playwright Jack Thorne's new adaptation, every single element is theatrically perfect.  I walked out of the matinee Saturday and would happily have gone back for the evening performance.  It's a joy from start to finish.

The festivities begin even before the show starts, with musicians playing fiddles, an accordion and bass and actors distributing fruit and bags of cookies down the aisles while other actors toss clementines and small bottles of water to the audience in the middle of the theatre and even up to the balcony.  It's a good thing they have good pitching arms or the people below would have been in trouble.  They're in Victorian garb (costumes by Rob Howell) of long black coats and top hats or full-skirted long dresses, so we're put in the spirit from the get-go.

Lighting designer Hugh Vanstone conveys the mood of 19th century London with twinkling lanterns filling the heights over the stage and up the sides of the theatre.  They flash for emphasis at key scenes, such as when Jacob Marley (Chris Hock) enters in chains to warn his former business partner Ebenzer Scrooge (Campbell Scott, in photo) to change his mean-spirited ways and to foretell of the three ghosts that will visit that night.  Howell, who is also the scenic designer, furthers the atmosphere by using a nearly bare stage with little more than door frames that come up from the stage floor as needed, minimal furniture and what looks like piles of black plastic garbage bags on either side of the stage.

A chorus takes the stage to advance the narrative and sing carols throughout and even play hand bells.  Scott hits every note right with his Scrooge.  Maybe it's in his genes.  His father played the role for a 1984 TV movie version of A Christmas Carol.  He seems to be enjoying himself to the hilt.  In fact, everyone on stage appears to be having a blast, including Broadway veteran Andrea Martin as the Ghost of Christmas Past.

The role of Tiny Tim is alternated between Jai Ram Srinivasan and Sebastian Ortiz, who played the part at the performance I saw using a rolling walker.  Both young actors have cerebral palsy just as the fictional character has a physical disability.  (Thorne insisted that only disabled children would be cast.)  I'm sorry to say I couldn't always understand Sebastian because of his quiet voice.  I would have missed one of his sweetest lines if my friend Mary hadn't told me what he said.  Scrooge has arrived at Tim's house with a bountiful feast, telling Tim he is being invaded.  Tim's reply is: "We surrender."

About that feast.  The interactive way it arrives onstage is so much fun and unexpected I was laughing out loud. This is a show that just gives and gives to its audience.  It's as generous with its entertainments as Scrooge becomes with his money.  God bless them, everyone.
Posted by Retta Blaney at 4:44 PM No comments: