Harriet's Return: Based on the Legendary Life of Harriet Tubman 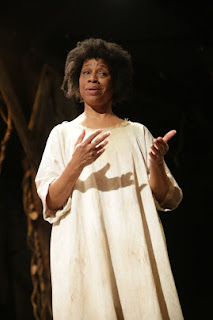 Harriet Tubman was a busy woman.  The 4’10” illiterate former slave made 19 trips back to the South to bring 300 other slaves to freedom in the North and Canada, led troops and missions during the Civil War, fought for women’s rights, was an herbalist, a nurse and founder of a boarding house for the poor, to name some of her accomplishments.

Karen Jones Meadows is also a busy woman.  The considerably taller actress is portraying Tubman in a one-woman play she wrote called Harriet’s Return: Based on the Legendary Life of Harriet Tubman, at the Castillo Theatre through March 4.  Unfortunately, Meadows’s play is crammed with so many details of Tubman’s life that it is hard to follow at times.  The script needs editing to eliminate some scenes and enhance and clarify others, and to provide transition.

She also needs to slow down.  Under Clinton Turner Davis’s direction, she is in nearly constant motion.  She tells Tubman’s story while circling the entire stage repeatedly, even while walking behind the bare trees that represent the forest through which Tubman escaped.  I had the feeling I should be running behind her to catch up.  This distanced me from the character.

Harriet’s Return is the result of a commission Meadows received in 1983 by Charlotte's Afro-American Cultural Center to craft a series of one-woman performances entitled "A Living Portrait of Black History." It became fully scripted in 1992, when a youth version was commissioned for Ron Milner's Paul Robeson Theater in Detroit.  An adult version debuted in 1995 at Crossroads Theatre in New Brunswick, NJ. Both of these scripts were created for other actresses, but Meadows ultimately stepped back into the role and has toured with it widely.

I wish Meadows and Davis could have seen the late Sarah Melici’s Fool for Christ about the life of Dorothy Day, a founder of the Catholic Worker Movement.  Melici wrote the script with Donald Yonker and performed Day simply and directly.  Without much moving around the set, she portrayed Day and the characters in her world through her expressive voice and gestures and a minimum of props and staging.  She addressed the audience directly and I always came away feeling I had spent an hour in conversation with Day and that I knew her well.

I felt the same way each time I saw the late Linn Maxwell’s Hildegard of Bingen and the Living Light and when I see Casey Groves’s Damien.

The most moving scene for me was when Tubman returns for her beloved husband, John, only to find he has another wife.  He closes the door on Harriet and her shock and pain are nicely realized.   For the most part, though, Meadow’s performance seemed more head than heart.  I did not feel I had spent time with Tubman.  Meadows is working hard to get out the information, but she doesn’t capture Tubman’s soul.

Posted by Retta Blaney at 12:06 PM No comments: 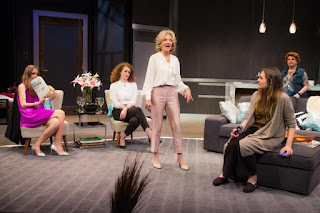 When I received the press invitation to Party Face, I didn’t even bother to read what the play was about.  I saw the name Hayley Mills and knew I wanted to be there.  I grew up loving her movies, from “Pollyanna” to “The Trouble with Angels.”  I had never seen her onstage and actually don’t think I’ve seen her anywhere in half a century.

Unfortunately, seeing Mills was the best part of Isobel Mahon’s sit-com of a show at City Center Stage 2.  Although well played by the cast, the characters are stereotypical, starting with Mills as Carmel, the pert, judgmental mother we’ve all seen too many times.  Even her compliments have a ring of criticism, such as when she arrives at her daughter’s apartment in a Dublin suburb and comments on the vase of stargazer lilies.

“In my day, you never saw a lily outside of a funeral parlor,” she says, providing the first of the insults she’ll aim toward her downtrodden daughter Mollie (Gina Costigan), just returned from three weeks in a psychiatric hospital after having a nervous breakdown while gazing at cereal boxes in the supermarket.  Mollie has invited her mother to see her newly finished kitchen extension.

“Is it a little clinical,” Carmel asks, before sweetly adding, “Of course, it’s all the rage now.”

Carmel has taken it upon herself to turn the occasion into a party, having invited Mollie’s narcissistic neighbor, Chloe (Allison Jean White), much to Mollie’s distress.  Joining what is now becoming a gathering are Mollie’s supportive sister, Maeve (Brenda Meaney), and Bernie (Klea Blackhurst), an obsessive-compulsive woman Mollie met at the hospital.

As you would expect, anger builds on all sides, including the melodramatic mention of a long-dead baby, but this being a light — really light — comedy, all will be resolved in the end.

Director Amanda Bearse keeps the plot from getting too out-of-hand, but she could have made note of Mills’ Irish accent, which disappeared shortly after she walked through her daughter’s door.    This was fine with me because I could hear in this now 71-year-old woman traces of the little girl whose voice and English accent I loved.

I’ll keep my memories of that Hayley and hope that if the grown-up one returns to New York to do another show, she can find a better one.
Posted by Retta Blaney at 2:47 PM No comments:

A Literary Guide for Lent 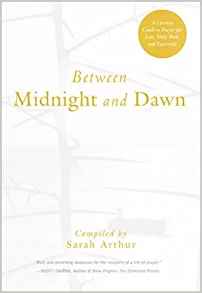 Sarah Arthur’s Between Midnight and Dawn is the last part of a series that includes At the Still Point: A Literary Guide to Prayer in Ordinary Time, and Light Upon Light: A Literary Guide to Prayer for Advent, Christmas, and Epiphany. Each collection stands alone, with its own unique curation of voices and themes. The reader is welcomed into what you might think of as a quiet library and finds company in the life-giving words of another – poetry and prose that transcends centuries, hemispheres.

With this book we arrive at Lent, those 40 days (not including Sundays) leading up to Easter. It’s that time when the church—and the soul—faces the tomb, aware of its own mortality, seeking the promise of light on the other side. It’s a journey we make alone, yet not alone, surrounded as we are by those who have caught a glimpse of sunrise.

Posted by Retta Blaney at 11:09 AM No comments: