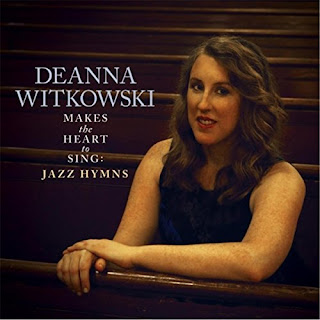 The first time I put on pianist Deanna Witkowski’s new CD, “Make the Heart to Sing: Jazz Hymns,” I was busy in my apartment and not really listening. Notes wafted in and out of my consciousness, though, and I would stop because they were so beautiful.

The next time I played it was under similar circumstances, except then I found myself singing along, not fully aware I was singing until I realized I know that music.  Witkowski, an award-winning composer following in the paths of Duke Ellington and Mary Lou Williams, has reimagined 14 classic Christian hymns into her world of jazz for trio arrangements that one can listen to for inspiration by day or for entertainment with a glass of wine by night.  I’ve been enjoying them both ways.

Makes the Heart to Sing is part of a larger project that includes the publication of a folio of Witkowski's arrangements.

"It's an instrumental jazz trio record, but the mission is to get this music played more widely outside of church and to bring these jazz interpretations into circulation inside churches,” she says.  “The album is almost a demo for church music directors, and the arrangements are meant for congregational singing.”

Joining Witkowski on the recording are Daniel Foose on bass and Scott Latzky on drums.  I love the way they move from a lively “Hyfrydol” (“Loves Divine, All Love Excelling”) to a gentle “There is a Balm in Gilead.”  With Epiphany on the horizon Jan. 6, I’ve especially been enjoying the trio’s swinging interpretation of “We Three Kings.”  It is cabaret room ready!

This is the second CD of sacred jazz I have from Witkowski, winner of the 2002 Great American Jazz Piano Competition.  I’ve been enjoying From This Place since its release in 2009.
Posted by Retta Blaney at 1:33 PM No comments: 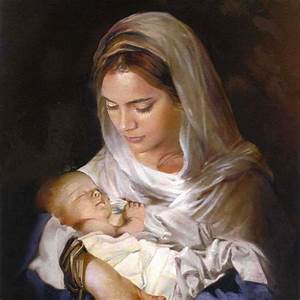 It wasn’t that long ago
that he’d spoken these stars
into being
and this woman’s life
was just a thought in his mind.
He’d smiled down on her birth
and entered her name in his pages
perhaps with an asterisk
denoting plans too sacred to be spoken
but pondered in his heart.
Now, newborn,
in wide-eyed wonder
he gazes up at his creation.
His hand that hurled the world
holds tight his mother’s finger.
Holy light
spills across her face
and she weeps
silent wondering tears
to know she holds the One
who has so long held her.

By Joan Rae Mills
From Light Upon Light: A Literary Guide to Prayer for Advent, Christmas, and Epiphany
Compiled by Sarah Arthur

Posted by Retta Blaney at 10:26 AM No comments: 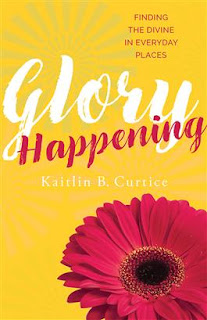 I like to read from a spiritual book as part of my morning prayer.  Right now I’m enjoying Glory Happening: Finding the Divine in Everyday Places by Kaitlin B. Curtice, a Native American Christian author, speaker and worship leader.

The book has an incarnational spirit, with its stories of everyday life followed by the moving and straightforward prayers Curtice has written.  I’m especially touched by the one that follows her reflection on The Practice of Patience.  She writes, “Hydrate our souls with the kind power of your Mystery.”  I love the idea of asking God to hydrate my soul. I say that now as I walk out my front door each day.

The book is divided into eight parts, each with about a half-dozen reflections on her life and how she finds the glory of God in its ordinariness. Sections include Creation, Light, Voice and Kingdom.  A scripture passage begins each reflection.

"The Kingdom, in this case, is the daily manifestation of shalom," she writes in her Introduction. "The Kingdom is presence, a full alertness of living here and now.  It is living within the reality of peace in every circumstance.  And we move toward Kingdom as we live in glory, in all its manifestations for us.  Like a timeline, like seasons, we experience glory as a process."

Glory Happening is a reminder to be in the moment because that is where we find God. When we take time to notice, we find that wherever we are, God is.
Posted by Retta Blaney at 3:05 PM No comments:

Never give up on your dreams 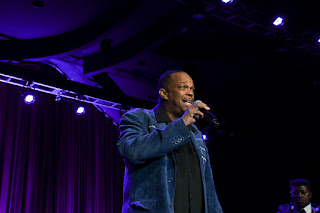 The good work of The Salvation Army was celebrated in music and testimony Tuesday night at its 70th Annual Gala held at the New York Marriott Marquis in Times Square.

Philanthropist, businessman and radio talk-show host John Catsimatidis was presented with The Pinnacle of Achievement Award, The Salvation Army Greater New York Division’s highest honor, for his years of generosity to the organization and to many others.

“John Catsimatidis is younger than The Salvation Army, but he’s incredible because of his spirit and incredible heart,” said Rita Cosby, the Emmy-winning TV host, radio star and bestselling author who hosted the event. She likened his generosity to that of The Salvation Army, citing The Army’s 2,707,097 meals served to the hungry last year in the Greater New York area, as well as the 500,409 nights of shelter and 605,695 days of childcare provided.

“Think about that,” she said.  “These are incredible statistics. Helping people in need – that’s what The Salvation Army is about. Period.”

“You put Carnegie Hall to shame,” Cosby said of all the young musicians.

The Old and the New

In his Invocation, Rabbi Ari Lamm said the work of The Salvation Army followed in the tradition of one of our great Biblical forebears.

“Those gathered here tonight are true children of Abraham,” he said.  “Like Abraham before them, may they be a blessing to all people.”

While tradition was a highlight of the evening, change was also celebrated. Lt. Colonel Ricardo Fernandez stepped into the role of Greater New York Divisional Commander this past summer. Lt. Colonel Ricardo thanked those in attendance for taking time from their busy holiday schedules to be there.

“New York is a busy place during the holidays,” he said.  “The Salvation Army is busy right along with it.”

He spoke of the holiday relief programs that just the week before had served Thanksgiving dinners to thousands of homeless and hungry people throughout the Greater New York area.

“And we are just getting started,” he said.

“The holidays are not the only season that we are hard at work,” he continued, noting The Salvation Army’s efforts during one of the worst hurricane seasons on record. “In every place the hurricanes struck, from Texas to the U.S. Virgin Islands, The Salvation Army was there, providing an extensive service to hundreds of thousands of victims and first responders.  Joining these operations were members of our own Greater New York Emergency Services team.”

He praised the Division’s efforts in Puerto Rico, where roughly 10 percent of New Yorkers have roots.

“But what about the day-to-day disasters in our own communities, the kind that don’t make the headlines?  The Salvation Army is there, too, working just as hard. We serve almost a million people a year throughout New York City, Long Island and the lower Hudson Valley.”

In his Christmas Message, Pastor A.R. Bernard, founder of the Christian Cultural Center, explained the work of The Salvation Army as being “HIP.” The “H” in that word stands for history, he said.  The “I” represents issues that cause strife, the unresolved history, and the “P” is whether we get involved with these issues or turn away. What makes the difference is when the issues become personal.

The only way we are going to change what is happening in our world, Pastor Bernard said, “is when we understand we have to take it personally and not feel we’re removed from it. We are our brother’s keeper.”

He said God showed us an example of this by giving us His son.

“God looked at the world and He took it personally.”

When it came time to receive his award, John Catsimatidis showed his humility – and his humor.  Looking out over his standing ovation, he joked, “Nobody move.”

He then talked about what was important to him.

“I’m not here to be honored, I’m here to help The Salvation Army,” he said. He also wanted to call attention to the continuing hardship in Puerto Rico, from which his daughter, Andrea, had just returned and shared with him her stories. He called on the government to get involved.

“These are American citizens,” he said.  “For them to be suffering without power, that’s not right.”

He said he was going to double the amount he had planned to give to The Salvation Army.

The evening culminated in a spirited performance by Mike Yung, who had been singing in the New York subways for 37 years until last year when his interpretation of the Righteous Brothers classic hit “Unchained Melody” was recorded and went viral. Within a week he was in L.A. to appear on The Late, Late Show with James Corden. Then it was on to America’s Got Talent where he earned a semifinalist spot on Season 12.  He is now recording a CD.

“Nothing happens to you before God says it’s time,” he said in a video presentation before he sang. “Never give up on your dreams.”

After a knockout performance of “the song that made me famous,” he was joined by the Greater New York Youth Band and Chorus for “The Christmas Song” and a rousing “New York, New York.”

The evening’s closer, the Rev. John C. Lin, had a hard task.

“How do you offer a benediction after this?” he asked, before calling upon God’s grace for all those present and their work.
Posted by Retta Blaney at 2:05 PM No comments: 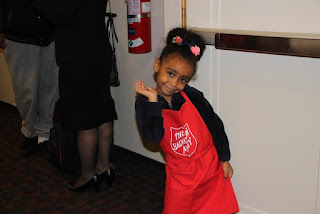 The first guest arrived around 8 on the morning of The Salvation Army Greater New York Division’s annual Thanksgiving Day dinner, even though doors to The Army’s 14th Street headquarters in Manhattan wouldn’t open until 11. By the time the servings were finished at 2, more than 600 people had enjoyed turkey dinner with all the trimmings, while taking home gifts of cookies, socks and toiletries.
This annual Thanksgiving dinner --- The Salvation Army’s largest in the New York City area --- is believed to be the oldest free Thanksgiving dinner in the city, and possibly the entire country. This year’s dinner was once again prepared by world-class caterer Great Performances, and paid for by The Salvation Army.
“It’s become a tradition here,” said Auxiliary Captain Giovanny Guerrero, Commanding Officer of The Salvation Army’s New York Temple Corps Community Center a few doors down. The center hosted a “companion” dinner for guests not able to navigate the stairs at headquarters.  “Our main goal is to get more unity in the community and especially among families.  We want to create a family ambiance so people won’t feel strange or singled out. They will feel they’ve reached home.”
Combined with sit-down dinners offered throughout the holiday week at locations around the Greater New York area, The Salvation Army served Thanksgiving dinners to close to 5,000 people, not counting the thousands of turkeys and chickens distributed to adults and families in need and hundreds of meals delivered to the homebound.
For the nearly 400 guests at The Salvation Army’s Freeport Corps Community Center on Long Island, dinner included pumpkin cheese cake, a signature dish of The Cheesecake Factory, which sponsored the meals and sent volunteers.


“It means a lot to provide a meal,” said Major Raquel Ramirez, Commanding Officer of the Freeport Corps. “We have people with a lot of disadvantages. We also have a senior center and a good number of the seniors came.  We have low-income people who couldn’t afford a good meal.  The spirit was good and the food was delicious.”
Posted by Retta Blaney at 7:42 AM No comments: