You may have heard of Stem to Steam, a new push to increase arts education in schools. The traditional curriculum of science, technology, engineering and math needs the A of arts to create the steam of a more rounded education.

With bullying having serious effects around the country and violence in schools a continuing problem, many people feel the humanizing and transforming power of the arts is needed. A bill before Congress is supporting the Stem to Steam effort.

So is a new multi-faceted program called StageNotes.com, which bills itself as "Presenting Broadway: The New Core Standards Curriculum That Performs."  I was interviewed this week about my book Working on the Inside: The Spiritual Life Through the Eyes of Actors and my experiences as an educator incorporating the arts in my curriculum. Click here to read my interview and to explore all that StageNotes has to offer.
Posted by Retta Blaney at 12:55 PM No comments:

That Man Who Carves That “Z” Is Back! 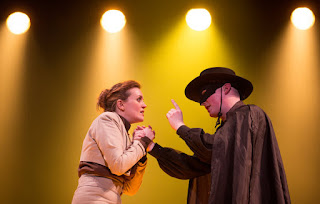 Once upon a time, I produced and directed a version of Mary Poppins with five actors, including me (okay, I played the title role) with a few props and the set consisting of whatever patio furniture we had. My best friend Kathy played both Mr. Banks and Bert (we split the scenes they had together), some kid named BooBoo from across the street played Mrs. Banks, and the other two kids filled in. We charged a nickel’s admittance, filled the yard with parents and kids, and when I leaped onto the picnic table with my umbrella and my mom’s big purse, the audience didn’t laugh. No, they clapped and cheered and stayed with the story. We believed everything, and so did they.

I thought about this backyard production of Mary Poppins, a genuinely fun and earnestly imagined production, while watching the stage production of The Mark of Zorro, from the Scottish troupe Visible Fictions at the New Victory Theater, because it shared those same qualities. I had had no idea what to expect, but I should first, in the interest of full disclosure, tell you that Zorro also appeared in my backyard once upon a time, and his black stallion rested in our chicken coop. So I have some feelings for the guy. You have to really know your stuff to satisfy my Zorro meter.

This production scores way beyond my meter’s capacity. Writer Davey Anderson’s script tells an adventure story with heart and skill and the absolute belief that is the essence of childhood imagination and good theater. Directed by Douglas Irvine, the story takes 65 minutes with only three actors. The publicity says that it uses a “minimum” of props, but I’d say they use a lot of props, counting the cut-outs representing Zorro, other characters, and animals.

At first, all you see on stage is a ratty looking kiosk (that will unfold to serve as various scene settings) bearing a wanted poster for Zorro, a black mask, and a black silhouette of Zorro on his horse, rearing up as if at the end of a television episode. Three actors appear and begin to tell Zorro’s story with considerable verve, and then they turn into the characters they have been telling us about. Denise Hoey plays the young Diego, riding piggyback on his father Alejandro. Alejandro teaches his son to fight with a sword and to fight fairly and not use the skill for vengeance but for justice. No sooner does Alejandro get those words out than he is murdered.

Diego grows up, and, forgetting his father’s words, does seek revenge and goes after his man. Most of the story takes us through this chase. While Hoey takes up the role of Isabella, Neil Thomas becomes Zorro, and Tim Settle plays the bad guys, the three often switch characters and parts with breathtaking speed when the story calls for it, or they spring up with cut-out characters in hand to tell the story. They do this with the certainty of childlike imagination, and no one in the audience has any doubt as to what is happening – just as you wouldn’t if you were in the backyard playing.

The children in the audience ate it all up, and well, we grownups did that, too, and cheered and laughed at the ingenious use of props: masking tape strung out on stage for a chase scene, a villain turning to grab a piece of paper with a big “Z” on it and clasping it to his chest before falling down dead, or, as when Zorro chases his man, an actor runs back and forth with a cut-out tree to show the distance they’re galloping over. This use of props became a “what will they do next” subtext that provided a considerable level of suspense. Then, when we believe Zorro is killed, and all is lost – well, you just have to find out what happens, because you will care. And the kids certainly do. The actors certainly don’t cheat us in energy or conviction, and, at the climactic moment, the cut-outs are tossed, and, as any good Zorro story should do, we get a real swordfight between hero and the villain.

What carries the day in this production is simple belief, which is not so simple to achieve. I was more entertained by this Zorro’s “special effects” than by all the bloated machinery pretending to be magic of Spiderman flying around next door to the New Victory Theater.

The only time The Mask of Zorro lost its imaginative grip on the story was when, for a few moments, the actors called attention to their props as props and aren’t we clever at using them – ie, they became grownups for a few minutes. It’s jarring, and it takes us out of the backyard effect. But all in all, this minimalist Zorro fills your heart and keeps you cheering for the original – and best – caped crusader of all, that fox of Old California, who leaves his mark of justice, El Zorro. I just hope he doesn’t want his horse back any time soon.

Mary Sheeran is a singer, editor, and the author of the novels Quest of the Sleeping Princess and Who Have the Power. Her CD, Through the Years, is available on CD Baby.
Posted by Retta Blaney at 4:38 PM No comments:

Just heard this from Sr. Carol Perry. The sisters in her convent used to take care of their neighbors’ cat when the couple went away. Louis was given his own room and spent most of his time there, indifferent to the nuns. (What animal practices indifference as well as a cat?)

What did bring Louis out, however, was the sound of Bill Clinton’s voice on the television. Whenever that cat heard the President’s voice he made a beeline to the TV.

One night Louis happened to be staying with the sisters when Clinton was giving his State of the Union message. As soon as Louis heard that familiar southern drawl he shot into the TV room and parked himself right in front of the set and sat watching spellbound throughout the speech, which we know was long because Clinton was long-winded.

By this time the sisters had already stopped referring to Louis by his name. They simply called him The Democrat.
Posted by Retta Blaney at 3:55 PM No comments: 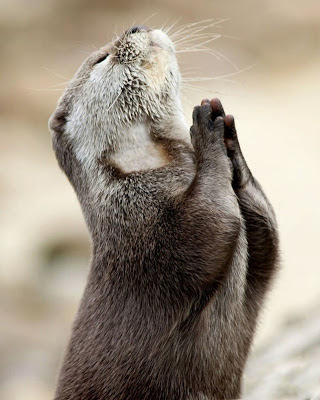 Auditioning for the animal version of "A Chorus Line."

Posted by Retta Blaney at 11:03 AM No comments: