Foundation connects faith and the arts 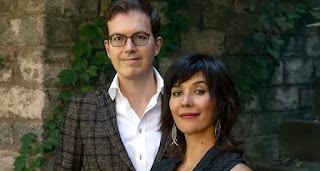 With the goal of exploring how art engages with religious traditions through a variety of disciplines and artistic practices, two long-time colleagues in the arts world have put years of discussion into action, forming the Foundation for Spirituality and the Arts to offer the contemporary art world a more welcoming environment for artistic expressions of faith.

“We’re imagining a kind of hub on a very small scale but significant enough for deep conversations to emerge and relationships to be built,” said Leeza Ahmady, director of programs for the foundation, which was incorporated in New York City last year. “We both have deep roots and connections to the arts world.”

Her partner in this venture is Tyler Rollins, who closed his art gallery in the Chelsea neighborhood of Manhattan in late 2020 to devote himself to the effort as executive director.

“This kind of project is not a sidebar,” Rollins said.  “It really requires full-time dedication.”

The two discussed their plans during an hour-plus Zoom interview in early March; he from Charleston, SC, where he lives much of the time, and she from the foundation’s headquarters in Manhattan’s Sugar Hill neighborhood in Harlem.

The foundation will offer residencies, gatherings, exhibitions and six-month fellowships for scholars and art managers to gain practical experience in administration, graphic design, fundraising and programming.

It held its first event Nov. 1 in Charleston.  Reflections on Contemporary Art and Faith: An Inspiring, Poetic and Discursive Evening featured a panel discussion and Q&A.  Rollins and Ahmady shared their personal and professional experience and their plans for the foundation.

They were joined by Amina Ahmed, a New York, London and Tehran-based artist, who gave an artist talk entitled Standing Under Our Ancestors: Understanding Our Mother, revolving around the revered role of Mary in Islam.   Elijah Siegler, a professor of religious studies and film scholar at the College of Charleston, facilitated the discussion and moderated the Q&A.  The event was hosted by The College of Charleston Religious Studies Department.

Close to 45 people attended the free event.  Intended as an intimate gathering, it attracted a mixed group of artists, religious studies and art students, members of various faith organizations, as well as university staff and educators.  A video of the program will be posted when FSA launches its website later this spring.

“We had overwhelmingly positive feedback from people who said it’s such a needed organization,” Rollins said.  “That was very affirming, that there would be immediate resonance in terms of what we’re trying to do.”

They are now gearing up for a larger event in Charleston to be held in May.  Details will be available on the foundations’ website, fsa.art.

The foundation will welcome a new round of young religious scholars into its fellowship program this spring.  Last May two fellows, one in curatorial experience and the other in graphic design, spent six months, two days a week, learning from Rollins and Ahmady.

“They got their hands into establishing a foundation, seeing the birth of a new venture,” Ahmady said. “They can use that as a stepping stone to a real position.”

The foundation will also offer a fully funded residency program with juried selection, along side less structured residency retreats for individuals and small groups.  Based in downtown Charleston, FSA’s residency program will be offered to visual artists, writers and composers exploring themes of religiosity and spirituality in their work. Theologians, philosophers and spiritual leaders will be invited to interact with the resident artists and arts professionals in the hopes of prompting possible collaboration, insightful exchanges and facilitation of connections between the fields of art and spirituality.  Residents’ three- to six-week stays include travel, room and board, food, and private studio and workspace.

The foundation’s founders have much to offer.  Rollins, 53, has more than 20 years of experience in New York City’s contemporary art world, gaining an international reputation as a leading advocate for some of the most compelling artists from the Asia Pacific region.  In 2008 he opened a public gallery space, Tyler Rollins Fine Art, with a program focusing on internationally active mid-career artists from Southeast Asia.  The gallery participated in some of the world’s top art fairs.

Ahmady, who is in her late 40s, directed New York’s acclaimed Asia Contemporary Art Week (ACAW), the premier United States platform for leading museums and galleries dedicated to showcasing both reputable and lesser-known artists and dialogues from across all regions of Asia, including the Middle East.  She began this work in 2005 and continued until leaving to work full time for the foundation.

Faith is important to both founders.  Rollins, who grew up in a staunch Presbyterian family in Durham, NC, now worships at the Episcopal Grace Church Cathedral in Charleston.  Ahmady, who was born in Afghanistan, grew up in a devout Muslim family and continues as a practicing Muslim.

Through their experience both founders observed a lack of support for artists of faith or spiritual leanings in the contemporary art world, even though they acknowledge there is nothing novel in the idea of linking spirituality and art.

“They’ve always been connected,” Ahmady says.  “Our job is to uncover what might have been going on that hasn’t been framed.  Modernity and secularism may have caused a seeming disconnect.  Our conversations could tap into that and bring it to light.

“It’s a two-way street.  The institutional art world can benefit from dialogue with faith communities and faith communities can be incredibly enriched by creative people.  We can have a stream flowing both ways in terms of inspiration.”

Rollins thinks the pandemic has fostered people’s appreciation for a spiritual connection to the arts.

“It’s something we’ve been thinking about for many years, conjoining faith and spirituality, for artists to have a space to kind of flourish in this nexus between the two,” he said.  “There’s a kind of secular model of inspiration and the sense of connection with faith traditions has been a bit sidelined in recent decades.  Spirituality is hardly ever addressed as the channel through which all creativity flows.  Certain sectors of our culture have sort of given up on each other.  We’re hoping to be a force for positive change.”

Posted by Retta Blaney at 1:11 PM No comments: