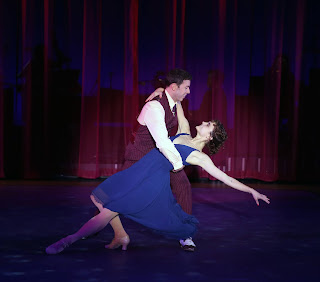 Irving Berlin wrote more than 1,500 songs during his prolific career.  Two dozen of them are brought to life in Cheek to Cheek: Irving Berlin in Hollywood, the charming song and dance revue that opened last night, presented by The York Theatre Company at Theater at St. Jean’s.

Four-time Tony Award-nominee Randy Skinner conceived, directed and choreographed the 80-minute show, which features six talented singer/dancers and, under the direction of David Hancock Turner, a five-piece onstage orchestra.  Together they transport the audience to an era of elegance and romance.  Barry Kleinbort’s book provides the cast just enough biographical information to introduce each number and keep the show moving at a good pace.

The tap numbers are terrific, starting with the first, which features Kaitlyn Davidson, Joseph Medeiros, Melanie Moore (in photo), Phillip Attmore and Jeremy Benton (in photo) giving their all to “Let Yourself Go.”

I also loved the Fred and Ginger-style dances for their pure escapism.  Writing for the movies starring that pair had a big influence on Berlin as he made the transition to writing songs that were meant to be danced to as well as sung.  This is evident as Benton, Moore and the company (which also includes Victoria Byrd) glide and swirl around the stage for “The Best Things Happen While You’re Dancing” from “White Christmas.”

The York’s producing artistic director, James Morgan, wisely keeps the set simple.  Six panels, three on each side of the stage, project old-time movie spotlights alternated by posters of the movies being featured.

This show would be enjoyable anytime but the holiday season seems particularly appropriate for this kind of nostalgic singing and dancing.  Cheek to Cheek runs through Jan. 2.