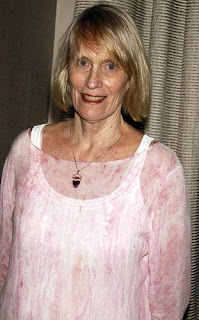 I wrote this feature for today's Theatermania.com.


Two hallmarks that have made Tina Howe such a beloved playwright, especially to women, are her humor and her shimmering endings. Both are onstage again in the first New York revival of Painting Churches, Howe’s 1983 breakthrough play about a family facing past resentments and a darkening future. This story of love and forgiveness, produced by the Keen Company, opens March 6 at the Clurman Theatre on Theatre Row under the direction of Carl Forsman.

The day before previews were to begin, Howe sat in the sunny living room of her Upper West Side apartment and talked about this most autobiographical, and vulnerable, of her works in which Mags, a young artist -- the Tina character (played by Kate Turnbull) -- returns to her parents gracious Boston townhouse determined to paint their portrait and finally win their approval. But Fanny and Gardner Church (Kathleen Chalfant and John Cunningham) have their own needs -- dealing with the decline in their lives as age and finances force them from their Brahmin world to a small cottage on Cape Cod. Set in the living room amid boxes in various stages of packing, old grievances give way to fresh understandings, with Howe’s zany sense of comedy lighting the way.

“The characters are very close to the household I grew up in, with echoes of the drama, the eccentricities, I heard constantly growing up,” she says.

Howe’s father was journalist Quincy Howe, who broadcast the evening news for years on CBS radio and moderated the final Kennedy/Nixon debate. One of her grandfathers and an uncle were Pulitzer Prize-winning writers, as is Gardner in the play.

“I grew up hearing the news in my father’s voice,” she said. “I knew what it felt like to grow up with a famous father.”

In Mags, she comes to terms with the feelings of inadequacy and need for attention that marked her early life. Reviewing the original production, New York Times critic Frank Rich wrote: “What Painting Churches has really revealed is the time and pain it costs us all to make that complete and honest parental portrait at last come into view.”

“It’s all true but none of it happened,” Howe says.

The play’s ending, though, is far removed from her parent’s leave-taking.

“The actual portrait, and the play, is a wish, a fantasy,” she says. “We all know life does not end that way. My parents’ ending was much more harrowing. I was painting a portrait of how we wish to see our parents at the end of life. That’s why audiences have loved it. It gives them a beautiful alternative, which I think is the function of theatre.

“I see Fanny and Gardner as tremendously brave and valiant. Fanny is aware Gardner is losing it but she soldiers on, creates an illusion that everything is all right. Their valor gets me. That’s very New England. They’re not into self-pity.”

She thinks of her endings as epiphanies.

“I believe in transformation. All my plays end in characters who are transformed and rise to a new level.”

Her plays also offer a decidedly female point of view, from The Nest, which deals with husband hunting, to Birth and After Birth’s portrayal of frazzled young motherhood, then menopause in Approaching Zanzibar and finally old age in Chasing Manet.

She is pleased that Painting Churches is one of three major revivals of the work of women playwrights this season, along with Margaret Edson’s Wit and Paula Vogel’s How I Learned to Drive. For her, it’s still too few.

“Women’s work is still not at the top of artistic directors’ lists, yet we’re the ones buying the tickets.”

Painting Churches was a finalist for the Pulitzer Prize for Drama, losing to Glengarry Glen Ross. Pride’s Crossing, her play about the first woman to swim from English to France, also was a finalist in a year the Pulitzer committee chose not to offer an award for drama.

Next up, Howe is shopping around her latest work, which she will identify only as “apocalyptic play set on ocean liner,” and is working on a musical and a TV pilot, the details of which she declines to disclose. And she is passionate about developing new writers in her role as playwright in residence at Hunter College’s MFA program.

“I’m a hopeless optimist. It’s so easy to go to the dark side, weeping and tearing of flesh. It’s much harder to find grace. That’s always my goal.”
Posted by Retta Blaney at 10:36 AM