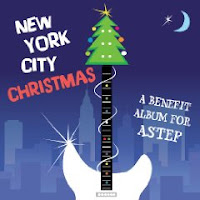 The twinkling lights that sparkle on this CD are also some of the brightest lights of Broadway. New York City Christmas has been assembled by orchestrator and musical director Lynne Shankel (Cry-Baby and Altar Boyz) and brings together Raul Esparza, Sierra Boggess, Chester Gregory II, Andy Karl, Constantine Maroulis and Orfeh, to name several of its singers, plus a host of dynamic musicians. This studio recording, drawn from a December 2008 concert at the Zipper Theatre, will, like that successful concert, benefit ASTEP (Artists Striving to End Poverty).

It starts off with Lindsay Mendez’s swinging “Santa Claus Is Coming to Town,” a jazzy number reminiscent of Ella Fitzgerald’s interpretations for her classic album, Ella Wishes You a Swinging Christmas. Gregory offers a heartfelt “Silent Night” and Esparza a lovely Latin-inspired “O Holy Night.” Boggess presents a crystal-clear “Have Yourself a Merry Little Christmas” and, with Mendez, a beautiful “Still, Still, Still/The First Noel.”

A new song that’s so appropriate for Broadway singers and the work of ASTEP is “New York Christmas,” written by Rob Thomas. Sung by Karl, the music has a bit of a country twang and calls angels to come down to the city to mend the “beaten and broken” from Brooklyn to Broadway. “Bring your compassion, your understanding. Lord, how we need it, on this New York City Christmas.”

The rousing Finale, sung by Gregory, Mendez, Karl and Tyler Maynard, blends “O Come All Ye Faithful, “Joy to the World” and the Hallelujah Chorus and is guaranteed to have you singing along and dancing around your living room.

The concert and CD were the result of a longtime dream Shankel had had. She wanted to put on a Christmas concert, “a big ol’ holiday hoo-hah where I could write all the arrangements and I could invite my favorite singers to come and perform,” she writes in the liner notes. She decided to do it, and make it a benefit for ASTEP. Everyone she asked to sing said yes and everyone she asked to play said yes. She asked the singers what their favorite carols were, then wrote arrangements tailored especially for them.

ASTEP was founded by Broadway music director Mary-Mitchell Campbell “on one very simple concept: Art has the power to change the world,” she writes in the liner notes. “In our work in Africa, India and the U.S., we have seen communities unite, conflicts resolve, imagination ignite and children believe they have the power to change their futures. We love watching children get excited about Shakespeare, or exploring their emotions in a play they wrote about HIV/AIDS.”

Blessings to all involved with this CD. You prove once again what Irving Berlin knew so well, “there’s no people like show people.” Merry Christmas!
Posted by Retta Blaney at 12:18 PM